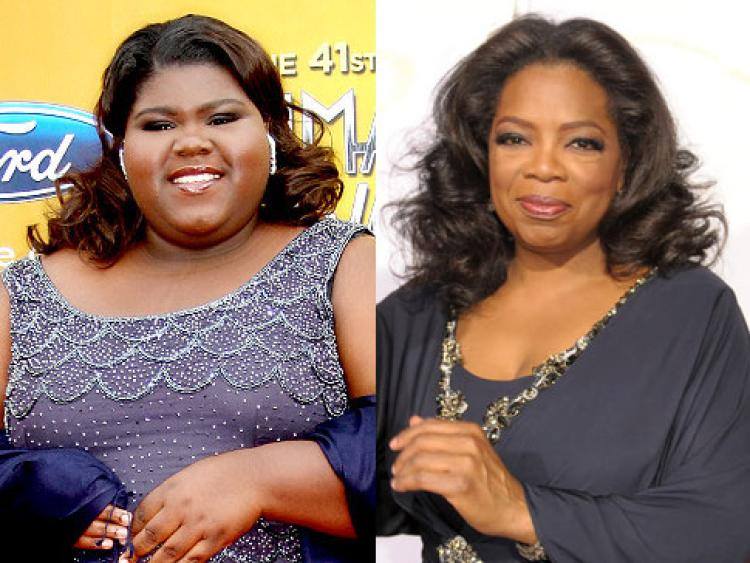 GM – FBF – The third (3) day of executive meetings and it’s hump day, thanks for bearing with me this week. I still can’t respond to any post but I thank you for stopping by. Today we have a younf black actress who took America by surprise. Make it a champion day!

Remember – “I think people look at me and don’t expect much. Even though, I expect a whole lot.” – Gabourey Sidibe

Gabourey Sidibe, born (May 6, 1983) is an American actress. Sidibe made her acting debut in the 2009 film Precious, a role that earned her the Independent Spirit Award for Best Female Lead in addition to nominations for the Golden Globe and Academy Award for Best Actress. Her other film roles include Tower Heist (2011), White Bird in a Blizzard (2014), and Grimsby (2016).

Sidibe was born in Bedford–Stuyvesant, Brooklyn, New York, and was raised in Harlem. Her mother, Alice Tan Ridley, is an American R&B and gospel singer who appeared on the fifth season of America’s Got Talent, on June 15, 2010. Her father, Ibnou Sidibe, is from Senegal and is a cab driver. Growing up, Sidibe lived with her aunt, the noted feminist activist Dorothy Pitman Hughes. She holds an associate’s degree from Borough of Manhattan Community College, and attended but did not graduate from City College of New York and Mercy College. She worked at The Fresh Air Fund’s office as a receptionist before she went on to pursue a career in acting.

In Precious, Sidibe played the main character, Claireece “Precious” Jones, a 16-year-old mother of two (both of whom are the results of being raped by her father) trying to escape abuse at the hands of her mother. The film won numerous awards, including two Academy Awards, a Golden Globe Award and Sundance Film Festival Grand Jury Award. On December 15, 2009, she was nominated for a Golden Globe in the category of Best Performance by an Actress in a Motion Picture Drama for her performance in Precious. The next month she received an Academy Award nomination for Best Actress.

Her next film, Yelling to the Sky, was a Sundance Lab project directed by Victoria Mahoney and starring Zoe Kravitz, in which she played Latonya Williams, a bully. In 2011, Sidibe was in the film Tower Heist and voiced a “party girl” character in “Hot Water”, the season 7 premiere of American Dad!. She appeared in the season 8 American Dad! episode “Stanny Tendergrass” early in 2013 and also stars in the music video for “Don’t Stop (Color on the Walls)” by indie pop band Foster the People. Sidibe also appeared in the Showtime network series entitled The Big C as Andrea Jackson.

During an interview, Sidibe reported that before landing her role in the 2009 film, Precious, Joan Cusack advised her that the entertainment industry was not for her and to quit, leaning over and stating: “Oh honey, you should really quit the business. It’s so image-conscious.”

On April 25, 2013, it was announced that Sidibe would be joining the cast of the third season of American Horror Story, portraying Queenie, a young witch. She returned to the series for its fourth season, American Horror Story: Freak Show as a secretarial school student, Regina Ross. As of 2015, she stars in Lee Daniels Fox musical series Empire as Becky Williams alongside Terrence Howard and Taraji P. Henson. Sidibe portrays the head of A&R in the Empire company. In April 2015, it was announced Sidibe would be promoted to a series regular beginning in Season 2. She also starred in the Hulu series Difficult People as Denise.

On June 3, 2015 it was confirmed Sidibe would be writing her memoir and it would be published in 2017. On January 6, 2016, Sidibe appeared in the penultimate episode for American Horror Story: Hotel, reprising her Coven role as Queenie, marking her third season in the series.

She announced on Twitter in January 2018 that she will be taking time off from acting the entire year to recover from having her tonsils removed. In March 2017, Sidibe revealed that she has been diagnosed with Type 2 diabetes and that as a consequence she underwent laparoscopic bariatric surgery in an effort to manage her weight. Research more about this American actress or watch one of her productions with your babies on video. Make it a champion day!