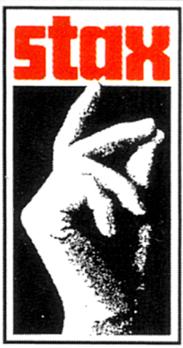 GM – FBF – During Black Music Month, there is a lot of good posts by people that look at artists on a daily and weekly basis. So let us look at the more famous record companies that put their sounds on wax. Over the rest of the weekends in June I will remind you of many that started in the late 50’s through the 70’s, starting with the sound of the South. Enjoy!

Remember – Barry Gordy and Motown want to create “The Sound for Young America”, I will stick with the rest of America. – Estelle Axton

Stax Records is an American record label, originally based in Memphis, Tennessee. Founded in 1957 as Satellite Records, the label changed its name to Stax Records in 1961. It was a major factor in the creation of Southern soul and Memphis soul music. Stax also released gospel, funk, jazz, and blues recordings. Renowned for its output of blues music, the label was founded by two siblings and business partners, Jim Stewart and his sister Estelle Axton (STewart/AXton = Stax). It featured several popular ethnically integrated bands (including the label’s house band, Booker T. & the M.G.’s) and a racially integrated team of staff and artists unprecedented in that time of racial strife and tension in Memphis and the South.

Following the death of Stax’s biggest star, Otis Redding, in 1967, and the severance of the label’s distribution deal with Atlantic Records in 1968, Stax continued primarily under the supervision of a new co-owner, Al Bell.Over the next five years, Bell expanded the label’s operations significantly, in order to compete with Stax’s main rival, Motown Records in Detroit. During the mid-1970s, a number of factors, including a problematic distribution deal with CBS Records, caused the label to slide into insolvency, resulting in its forced closure in late 1975.

In 1977, Fantasy Records acquired the post-1968 Stax catalogue and selected pre-1968 recordings. Beginning in 1978, Stax (now owned by Fantasy) began signing new acts and issuing new material, as well as reissuing previously recorded Stax material. However, by the early 1980s, no new material was being issued on the label, and for the next two decades, Stax was strictly a reissue label.

After Concord Records acquired Fantasy in 2004, the Stax label was reactivated, and is today used to issue both the 1968–1975 catalog material and new recordings by current R&B and soul performers. Atlantic Records continues to hold the rights to the vast majority of the 1959–1968 Stax material.
Research more about African – American music companies and share to your babies. Make it a champion day!