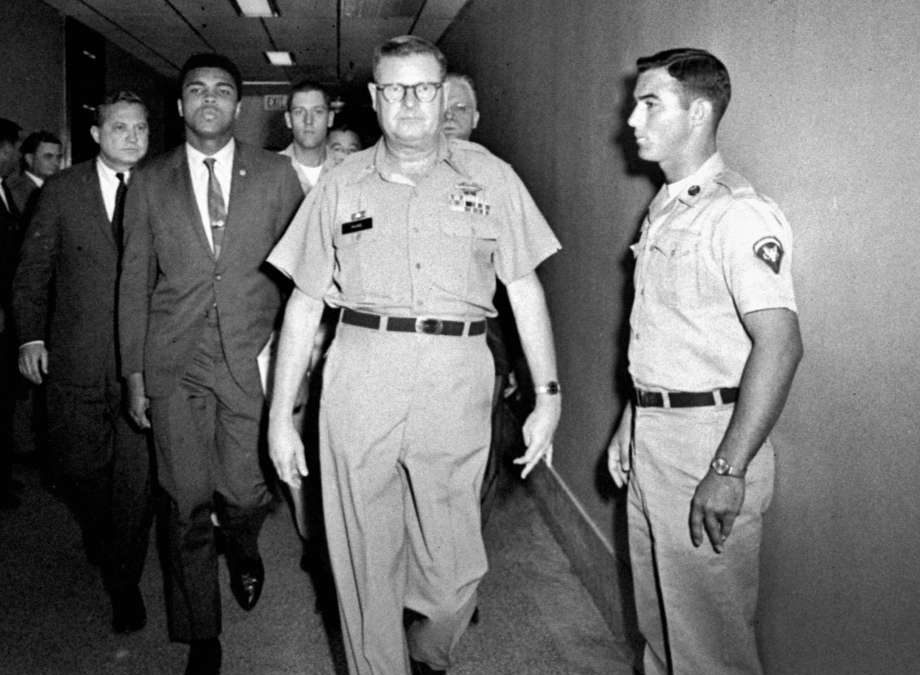 GM – FBF – Fifty One Years Ago, I could have told you about many different events but to me this was the biggest event on that date. I still say he is the GOAT (Greatest of all time) not for what he did in his profession but how he took on the government and lived by his tearms. Enjoy!

Houston, June 20, 1967–Cassius Clay, the deposed heavyweight champion, was convicted by a jury tonight of violating the United States Selective Service laws by refusing to be drafted.

Federal District Judge Joe E. Ingraham sentenced Clay to five years in prison and fined him $10,000. This was the maximum penalty for the offense, which is a felony.
The judge’s sentence was pronounced immediately at Clay’s request.

“I’d appreciate it,” the 25-year-old boxer said, “if the court will do it now, give me my sentence now, instead of waiting and stalling for time.”
His lawyers said he “wants to be able to sleep tonight” without worrying what the sentence would be.

Clay, who had contended that his status as a Black Muslim minister made him exempt from the draft, stood passively in front of the judge’s bench as the judge pronounced sentence.
Every eye in the crowded courtroom was on him as he stared straight ahead, saying, “No, sir,” firmly when the judge asked him if he wanted to say anything that might go toward mitigating his sentence.

Before the sentencing, Morton Susman, United States Attorney, indicated that he would file no objection to the judge’s giving Clay a lighter sentence than the maximum.
“The only record he has is a minor traffic offense,” said Mr. Susman.

He said that Clay, as an athlete, had brought honor to the United States by winning in the Olympics in Rome in 1960, and had brought credit to himself by becoming heavyweight champion of the world.
“He became a Muslim in 1964 after defeating Sonny Liston for the title,” said Mr. Susman. “In my opinion, his trouble started with that–this tragedy and the loss of his title can be traced to that.”

After Clay had refused in April to take the Army induction oath, the World Boxing Association and the New York Athletic Commission stripped him of his title.
Mr. Susman, who was aided in the prosecution by a Negro assistant, Carl Walker, said that he had studied the Muslim order “and it is as much political as it is religious.”
Clay, who had stood stiffly in his gray silk suit and black alligator shoes without speaking, could keep quiet no longer.
“If I can say so, sir,” he said, “my religion is not political in no way.”

There were a number of Muslim members in the courtroom for the verdict and the subsequent sentencing, but there was no outcry and no disturbance. A number of special agents of the Federal Bureau of Investigation were watching the audience along with Federal marshals.

The jury, six men and six women, all white, stayed in the jury box during the sentencing.
Clay’s attorneys, Hayden C. Covington of New York City and Quinnan A. Hodges of Houston, took exception to Mr. Susman’s remarks about the Muslims.

Mr. Covington, who has won civil rights suits for Jehovah’s Witnesses, a religious sect, in a number of constitutional cases, said: “I take exception to remarks that this man is under the influence of the Muslims in any way.”
Clay, he said, is one of the finest men he has ever met and acted from “sincerity and honesty” when he refused last April 28 to step forward and be inducted into the armed services at Houston.

Both Mr. Covington and Mr. Hodges asked Judge Ingraham to put Clay on probation. Failing that, said Mr. Covington, the former champion should not be given a sentence more severe than those given in a similar cases. “That’s 18 months,” he said.
Judge Ingraham, after being told that Clay’s attorneys would appeal, said that now was not the time to ask for clemency. If the conviction should be thrown out on appeal, “the sentence would be nil,” he said, but if it should be upheld, that would be the time to seek a reduction in sentence or to seek probation.
Clay, who had known both applause and boos in his seven years as a boxer, did not seem downcast at today’s turn of events.

His step was as jaunty as ever as he walked from the courtroom after being released on $5,000 bond. He held hands with two young women who had been with him during intermissions in the trial and he smiled at the crowd that gathered around. He allowed the television cameramen to surround him and shuffle him off down the street.

The jury was out considering the verdict for only about 20 minutes. Everyone knew before it retired that Clay would be convicted. He and his lawyers had not attempted to deny that he had refused induction. Their main contention was that the draft boards in Louisville, Ky., and in Houston had acted improperly in not granting him a deferment as a minister.
After Judge Ingraham had ruled that a study of the huge draft board file of the Clay case had convinced him that the draft boards had not acted “arbitrarily or capriciously” in refusing the deferment. Clay’s conviction became a foregone conclusion.

Clay paid no attention to the legal maneuvering during the day. He sat at the defense table, drawing and chewing gum.
During recesses, while Clay stood out in the corridors in the Federal Courthouse and signed autographs for children, one of his attorneys showed reporters some of the drawings that Clay had made. One showed an airplane flying over a heavily wooded mountain range toward the rising sun. Another portrayed a ship sailing head-on into a fjord between two mountain ranges.

Clay himself exhibited other drawings–mystic symbols, clouds and so forth. One was an elaborate sketch of the words “Muhammad Ali,” which is his Muslim name.
In all, the jury heard only an hour or so of testimony, most of it from Government witnesses.Research more about the great American and share with your babies Make it a champion day!