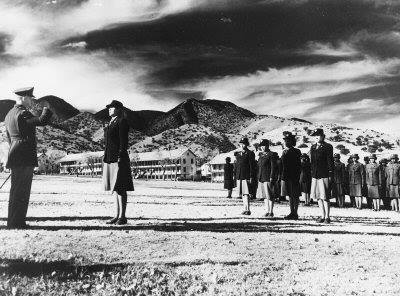 GM – FBF – Our story today centers around World War II and how black women changed the face of training for back women. Enjoy!

Today in our History – December 4, 1942 – 32nd and 33rd WAACS Headquarters Companies (World War II) – the army post was the largest black military post in the country.

Organized in the fall of 1942, Iowa, the all-black Thirty-Second and Thirty-third Women’s Auxiliary Army Companies would become the first contingent of WAACS assigned to a military installation in the United States during World War II. Composed of nearly 200 auxiliaries and seven officers, company members completed six weeks of intensive training in Iowa before reporting to Fort Huachuca, Arizona, on December 4, 1942. At the time, the army post was the largest black military post in the country. There, the units were assigned to the Ninth Service Command and the post headquarters, respectively.

Upon their arrival, auxiliaries of the Thirty-second and Thirty-third companies quickly enhanced the training programs at Fort Huachuca. The successful performances of Auxiliaries Priscilla Taylor and Reba Caldwell while working with a Ninety-third Infantry division convoy during its desert training exercises garnered admiration and praise from the post commander, Edwin Hardy, and division personnel. And WAAC recreational officers Geraldine Bright and Mercedes Jordan created All WAAC Musical Revues, Glee Clubs, and USO comedies, providing precious moments of levity for the uniformed servicewomen and men training at the desert installation. Yet the formal presence of the WAAC company servicewomen and officers and the duties they performed while stationed at the military post were subject to intense scrutiny grounded in prevailing sexual stereotypes and innuendo at nearly every turn.

The Thirty-Second and Thirty-Third Post Headquarters Companies continued to serve at Fort Huachuca, Arizona before being disbanded in late 1945. However, many of its senior officers were subsequently reassigned to other military installations throughout the United States or deployed for overseas duty with the 6888th Central Postal Directory Battalion in Europe later in the war. Research more about Black Woman in the services and share with your babies. Make it a champion day!