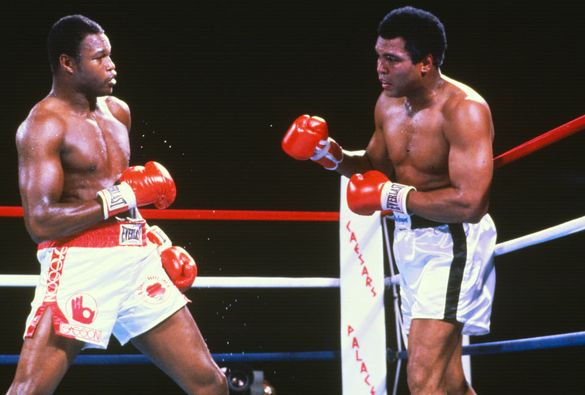 GM – FBF – Today’s American Champion spent some of his time in my hometown checking out some of the young talent and always told the babies of Trenton to finish school. Since he was only across the bridge in Easton, PA. He is an American former professional boxer who competed from 1973 to 2002. He grew up in Easton, Pennsylvania, which led to his boxing nickname of the Easton Assassin.His left jab is rated among the best in boxing history, held the WBC heavyweight title from 1978 to 1983, The Ring magazine and lineal heavyweight titles from 1980 to 1985, and the inaugural IBF heavyweight title from 1983 to 1985During his only title reign, he defended his title against 19 fighters, the second most in history behind Joe Louis. He also holds the record for the longest individual heavyweight title streak in the modern boxing history. He is one of only five boxers—along with Joe Frazier, Ken Norton, Leon Spinks and Trevor Berbick—to defeat Muhammad Ali; he is the only one to have stopped Ali.He won his first 48 professional bouts, including victories over Norton, Ali, Earnie Shavers, Mike Weaver, Gerry Cooney, Tim Witherspoon, Carl Williams and Marvis Frazier. He fell one short of matching Rocky Marciano’s career record of 49–0 when he lost to Michael Spinks in an upset in 1985.Holmes retired after losing a rematch to Spinks the following year, but made repeated comebacks. He was unsuccessful in three further attempts (against Mike Tyson in 1988, Evander Holyfield in 1992 and Oliver McCall in 1995) to regain the heavyweight title.He fought for the final time in 2002, aged 52, against the 334lb Eric “Butterbean” Esch, and ended his career with a record of 69 wins and 6 losses. He is frequently ranked as one of the greatest heavyweights of all time and has been inducted into both the International Boxing Hall of Fame and World Boxing Hall of Fame.Today in our History – November 3, 1949 – Larry Holmes was born.Holmes, a street fighter in his youth, entered organized boxing at a youth centre in Easton, Pennsylvania. He won 19 of his 22 fights and several titles before turning professional at age 24. In the mid-1970s he was a sparring partner for both competing heavyweight champions, Muhammad Ali and Joe Frazier. Holmes struggled to establish his identity as a first-rate fighter with these two great heavyweights in contention and found it difficult to get top-level bouts.From 1973 to 1978 Holmes won 28 consecutive bouts, culminating in a victorious 15-round decision over reigning champion Ken Norton on June 9, 1978, for the World Boxing Council (WBC) heavyweight crown.Holmes defended the title 17 times between 1978 and 1983, defeating such formidable boxers as Earnie Shavers, Leon Spinks, and Gerry Cooney. On October 2, 1980, Holmes faced the celebrated Ali, who at age 38 was mounting a comeback. Holmes won in 11 rounds, cementing his claim as world heavyweight champion. The fight, however, was emotionally difficult for Holmes.He counted Ali as a good friend, and this fight, occurring after Ali’s prime, put Holmes in the position of having to beat, in fact pummel, his mentor.In 1983, amid ongoing disagreements with boxing promoter Don King, Holmes relinquished his WBC title. The International Boxing Federation, however, still regarded him as heavyweight champion, and he defended that title three times before losing it to Michael Spinks in a 15-round decision on September 21, 1985. Holmes retired after the loss, his first in 49 bouts, which kept him from matching Rocky Marciano’s career record of 49–0.Holmes came out of retirement in 1986, only to lose a rematch to Michael Spinks. In 1988 he again returned to the ring to take on heavyweight champion Mike Tyson; the referee halted the fight in the fourth round after Holmes had endured three early knockdowns. In 1992, after beating opponent Ray Mercer, Holmes advanced to the title bout with Evander Holyfield, who defeated him in a decision.On April 8, 1995, Holmes challenged Oliver McCall for the WBC heavyweight crown but lost in 12 rounds. After winning his next four bouts, Holmes fought Brian Nielsen for the International Boxing Organization heavyweight title on January 24, 1997, but was defeated.Holmes retired from the sport in 2002, with a record of 69 wins (44 by knockout) and 6 losses. He was inducted into the International Boxing Hall of Fame in 2008. Research more about this great American Champion and share it with your babies. Make it a champion day!