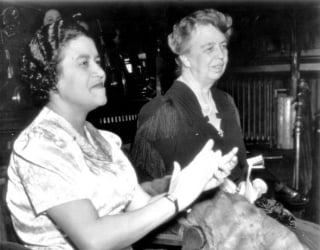 GM –FBF – Today’s American Champions was a civil rights activist, social worker, race relations specialist, and the first female African American state legislator elected in the United States, based in Philadelphia, Pennsylvania.Born in Maryland and raised in Boston, she started her professional career as a public school teacher in Boston. She would then go onto work for the Young Women’s Christian Association, and then with the American Friends Service Committee. In 1935, she became assistant to the director of Philadelphia’s Works Progress Administration and also began politically organizing for the Democratic National Committee.In 1938, she was elected to the Pennsylvania state legislature. She served for a year as a state representative in which she introduced nine bills and three amendments on issues ranging from affordable housing projects to fair employment legislation.During the Roosevelt administration, she was appointed to the Office of Civilian Defense on October 20, 1941, and worked as a race relations advisor. In 1944, she broke away from the Democratic Party and publicly supported the Republican presidential candidate. In her later years, she turned to global issues and helped found the United Nations Council of Philadelphia, later known as the World Affairs Council.Today in our History – November 8, 1938 – Crystal Bird Fauset becomes the 1st black woman elected to a state legislature in the U.S. acquiring this distinction by being named to the Pennsylvania House of Representatives.Crystal Bird Fauset, the first African-American female state legislators in the United States, was born on June 27, 1894 in Princess Anne, Maryland. She grew up in Boston, Massachusetts but spent most of her adult and political life in Philadelphia, Pennsylvania. Between 1914 and 1918 Fauset worked as a public school teacher in Philadelphia.In 1918 she began working as a field secretary for African American girls in the Young Women’s Christian Association (YWCA), a job she held until 1926. In 1925 the Interracial Section of the American Friends Service Committee (AFSC or Quakers) was formed and Fauset joined the organization in 1926, wanting, as she said, to work on her interest “in having people of other racial groups understand the humanness of the Negro wherever he is found.”Between September 1927 and September 1928 she made 210 appearances before more than 40,000 people for the AFSC. During the late 1920’s Fauset studied at Teacher’s College, Columbia University, graduating in 1931.In 1932 Fauset founded the Colored Women’s Activities Club for the Democratic National Committee where she helped African American women register to vote. In response to her efforts the Roosevelt Administration appointed her Director of the Women and Professional Project in the Works Progress Administration (WPA) in Philadelphia. In 1935 she also served on the Federal Housing Advisory Board.That same year Crystal Bird married sociologist and political thinker Arthur Fauset and they became a dynamic political couple. Fauset then began to work on the Joint Committee on Race Relations of the Arch and Race Streets (Quaker) Yearly Meetings where she helped establish the famous Swarthmore College Institute of Race Relations which documented employment and housing discrimination against Pennsylvania African Americans.In 1938 Fauset was elected to the Pennsylvania State Legislature, representing the 18th District of Philadelphia, which was 66% white at that time. As a state representative Fauset introduced nine bills and three amendments on issues concerning improvements in public health, housing for the poor, public relief, and supporting women’s rights in the workplace.In 1941 Fauset’s friendship with First Lady Eleanor Roosevelt helped her secure a position as assistant director and race relations director of the Office of Civil Defense, becoming part of President Roosevelt’s “Black Cabinet” and promoting civil defense planning in black communities, recruitment of blacks in the military, and dealing with complaints about racial discrimination.In 1944, disappointed by the Democratic Party’s failure to advance civil rights, Fauset switched to the Republican Party and later became a member of the Republican National Committee’s division on Negro Affairs.After World War II Fauset turned her attentions to a more global forum, helping to found the United Nations Council of Philadelphia, which later became the World Affairs Council. Throughout the 1950s she travelled to Africa, India, and the Middle East to meet and support independence leaders. Fauset died on March 27, 1965 in Philadelphia. Research more about this great American Champion and share it with your babies. Make it a champion day!