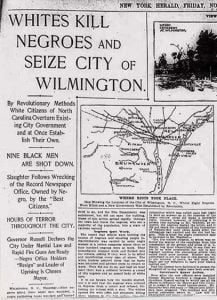 GM – FBF – Today’s American Champion event was The Wilmington insurrection of 1898, also known as the Wilmington massacre of 1898 or the Wilmington coup of 1898, occurred in Wilmington, North Carolina, on Thursday, November 10, 1898.It is considered a turning point in post-Reconstruction North Carolina politics. The event initiated an era of more severe racial segregation and effective disenfranchisement of African Americans throughout the South, a shift already underway since passage by Mississippi of a new constitution in 1890, raising barriers to voter registration. Laura Edwards wrote in Democracy Betrayed (2000):”What happened in Wilmington became an affirmation of white supremacy not just in that one city, but in the South and in the nation as a whole”, as it affirmed that invoking “whiteness” eclipsed the legal citizenship, individual rights, and equal protection under the law that blacks were guaranteed under the Fourteenth Amendment.The white press in Wilmington originally described the event as a race riot caused by blacks. However, over time, with more facts publicized, the event has come to be seen as a coup d’état, the violent overthrow of a duly elected government, by a group of white supremacists. Multiple causes brought it about. It is claimed to be the only such incident in American history, (other late Reconstruction Era violence did not result in a direct ‘coup’ or removal and replacement of elected officials by unelected individuals).The coup occurred after the state’s white Southern Democrats conspired and led a mob of 2,000 white men to overthrow the legitimately elected local Fusionist government. They expelled opposition black and white political leaders from the city, destroyed the property and businesses of black citizens built up since the Civil War, including the only black newspaper in the city, and killed an estimated 60 to more than 300 people.Today in our History, November 10, 1898 – white supremacists murdered African Americans in Wilmington, North Carolina and deposed the elected Reconstruction era government in a coup d’etat.It was the morning of November 10, 1898, in Wilmington, North Carolina, and the fire was the beginning of an assault that took place seven blocks east of the Cape Fear River, about 10 miles inland from the Atlantic Ocean. By sundown, [Alex] Manly’s newspaper [The Daily Record] had been torched, as many as 60 people had been murdered, and the local government that was elected two days prior had been overthrown and replaced by white supremacists.For all the violent moments in United States history, the mob’s gruesome attack was unique: It was the only coup d’état ever to take place on American soil.Lost in the fire that destroyed The Daily Record were the lives of Black citizens and the spirit of a thriving Black community, and also the most promising effort in the South to build racial solidarity. — Adrienne LaFrance and Vann Newkirk in The Lost History of an American Coup D’ÉtatBefore the violence, this port city on the Cape Fear River was remarkably integrated. Three out of the ten aldermen were African Americans, and Black people worked as policemen, firemen, and magistrates.Democrats, the party of the Confederacy, vowed to end this “Negro domination” in the 1898 state legislative elections. Their strategy was to enlist men who could write (white journalists and cartoonists), men who could speak (white supremacists who whipped up emotions at rallies), and men who could ride (the Ku Klux Klan-like “Red Shirts” who were basically armed ruffians on horseback).Alex Manly, editor. Source: UNC-Chapel Hill.The white supremacists used an editorial by Alex Manly, the editor of Wilmington’s Black newspaper the Daily Record, to stir a firestorm at the time of the elections. The editorial responded to a speech by a Georgia socialite who promoted lynching as a method “to protect woman’s dearest possession from the ravening human beast.”Manly condemned lynching and pointed out the hypocrisy of describing Black men as “big burly, black brute(s)” when in reality it was white men who regularly raped Black women with impunity. He added that some relations between the races were consensual.White supremacist rallies kept white outrage at the editorial at a fever pitch. Former Confederate colonel Alfred Waddell gave a speech suggesting that white citizens should “choke the Cape Fear (River) with carcasses” if necessary to keep African Americans from the polls.On election day, the Red Shirts patrolled Black neighborhoods with guns. Democrats won every seat, but these were state legislative seats. African Americans still maintained power in Wilmington’s city government.Some 800 white citizens led by Waddell met at the county courthouse and produced the “White Declaration of Independence” which stated: “We, the undersigned citizens… do hereby declare that we will no longer be ruled, and will never again be ruled by men of African origin.”The following day — Nov. 10 — Waddell led a mob of 2,000 armed men to the Daily Record and burned the building to the ground.Armed rioters in front of destroyed press building.Rumors tore through the Black neighborhoods. The tinderbox ignited at the corner of Fourth and Harnett, where African Americans at Walker’s Grocery Store faced off against white men at Brunje’s saloon. A shot was fired and someone yelled, “White man killed.”Gunfire erupted. Unarmed Black men scattered in all directions and were gunned down. Violence quickly spread. The Wilmington Light Infantry, the White Government Union, and the Red Shirts poured into the Black neighborhoods with rifles, revolvers, and a Gatling gun.Wilmington Light Infantry machine gun crew.As bullets were still flying, Waddell threw out the democratically-elected aldermen and installed his own. This was nothing less than a coup d’état. The hand-picked men “elected” Waddell mayor. Many Black leaders were jailed “for their own safety” and then forcibly marched to the train station under military escort and sent out of town.After the riot, thousands of Black citizens fled. In 1900, the North Carolina legislature effectively stripped African Americans of the vote through the grandfather clause and ushered in the worst of the Jim Crow laws. Research more about this great American tragedy and share it with your babies. Make it a champion day!