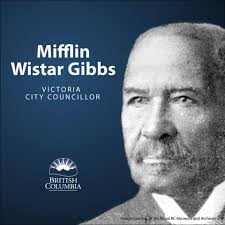 GM – FBF – Today’s American Champion was an American-Canadian lawyer, judge, diplomat, and banker.Today in our History – December 1, 1873 – Mifflin Wister Gibb elected city judge in Little Rock and became the first Black to hold such a position.Mifflin Wistar Gibbs was a Little Rock (Pulaski County) businessman, a politician, and the first elected African-American municipal judge in the United States.Mifflin Gibbs was born on April 17, 1823, in Philadelphia, Pennsylvania, the eldest of four children born to Jonathan and Maria Gibbs. His father, a Methodist minister, died when Mifflin was a child, and his mother worked as a laundress.Gibbs learned carpentry through an apprenticeship. He read widely and attended debates at the Philadelphia Library Company of Colored Persons. He had a chance to practice his own oratory in the 1840s when Frederick Douglass invited him to help conduct an abolitionist lecture tour.Journeying to California soon after the gold rush of 1849, he became a successful retail merchant and a leader of the growing black population in San Francisco. He was a founder of the first black newspaper west of the Mississippi River, The Mirror of the Times (1855). He left San Francisco in 1858 to escape growing racial prejudice on the California frontier.Gibbs settled in Victoria, Vancouver Island, British Columbia. Once again, he found business opportunities and was soon among the colony’s black elite. In 1866, he became the first black man elected to the Victoria City Council.It is unclear why Gibbs abandoned British Columbia, where his economic fortune was assured and where he had found a modicum of political success. In 1870, he returned to the United States and settled in Oberlin, Ohio. But he was restless, and the placid college town could not hold his attention for long. In 1871, he headed south.His brother Jonathan C. Gibbs was serving as secretary of state in Reconstruction Florida, where Gibbs visited him. Then he attended a freedmen’s convention in Charleston, South Carolina, where he met William H. Grey, Arkansas’s state commissioner of immigration and lands. At Grey’s urging, Gibbs set off for Arkansas.Gibbs crossed the Arkansas River into Little Rock in May 1871. He liked the city and settled in quickly. He read law with some local white Republican lawyers, and as soon as he had passed the bar examination in 1872, he opened a partnership with Lloyd G. Wheeler, a well-known black attorney and leader in the Pulaski County Republican Committee. In October 1873, Gibbs accepted the Republican nomination for Little Rock police judge. He was allied with the “regular” Republicans, the faction controlled by U.S. Senator Powell Clayton. Gibbs won the election in a tight race and served as police judge from November 1874 to April 1875, when the Democrats defeated him at the end of Reconstruction.The restoration of Democratic hegemony in 1874–75 did not end black political participation. Gibbs continued to be a power in the Republican Party, serving for a decade as secretary of the state GOP central committee. He was often a delegate to national conventions.His success within the Republican Party reflected his close affiliation with the iron-willed Clayton, who used Gibbs and other black leaders to keep the black party leadership pliant and dependable. Gibbs’s loyalty brought patronage jobs.In 1877, President Rutherford B. Hayes named Gibbs registrar of the Little Rock district land office; President Benjamin Harrison named him receiver of public monies in Little Rock in 1889. Finally, President William McKinley named him U.S. consul to Tamatave, Madagascar, in 1897.Gibbs never abandoned business despite his federal employment. He started a real estate agency in his law office in 1874, and he invested widely, using profits from his California and Canadian ventures. In 1903, Gibbs, at age eighty, commenced his most ambitious business effort, the creation of the Capital City Savings Bank.It was the second black-owned bank in Arkansas. Organized with a capital stock of $10,000, by 1905 its deposits reached $100,000. Shortly after the bank opened, a health insurance division, the People’s Mutual Aid Association, was added.On June 18, 1908, the bank failed to open amid rumors that it was insolvent. Efforts to save the bank were fruitless, and the chancery court appointed a receiver. It became public knowledge that the bank had been poorly managed, its records unorganized. That year, a grand jury began investigating the bank management. In January 1909, Gibbs and other bank directors were indicted for knowingly accepting deposits in an insolvent bank. In May, Gibbs reached a settlement in an out-of-court decision on the $28,000 in claims against him. The amount of the settlement was not announced, but it is clear he was able to save the bulk of his personal fortune.Little is known of Gibbs’s personal life. He married Maria Alexander Gibbs in 1859, and they had five children. In his autobiography, Gibbs hardly mentions his family. After a prolonged period of declining health, Gibbs died on July 11, 1915, at his home in Little Rock; he is buried in the Fraternal Cemetery on Barber Street in Little Rock. He was posthumously inducted into the Arkansas Black Hall of Fame in 2016. Research more about this great American Champion and share it with your babies. Make it a champion day!