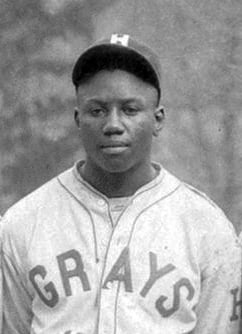 GM – FBF – Today’s American Champion was an American Negro league baseball catcher. Baseball historians consider him to be among the very best power hitters and catchers in the history of any league, including Major League Baseball (MLB). In 1972, he became the second Negro league player to be inducted in the National Baseball Hall of Fame. He played for the Homestead Grays from 1930 to 1931, moved to the Pittsburgh Crawfords from 1932 to 1936, and returned to the Grays from 1937 to 1939 and 1942 to 1946. In 1937, he played for Ciudad Trujillo in Trujillo’s Dominican League and from 1940 to 1941, he played in the Mexican League for Rojos del Águila de Veracruz. Gibson served as the first manager of the Santurce Crabbers, one of the most historic franchises of the Puerto Rico Baseball League.He was known as the “black Babe Ruth”. In fact, some fans at the time who saw both Ruth and him play called Ruth his name. He never played in the major leagues because of the unwritten “gentleman’s agreement” that prevented non-white players from participating. He stood 6-foot-1 (185 cm) and weighed 210 pounds (95 kg) at the peak of his career. Today in our history – December 12, 1911 – Joshua Gibson (December 12, 1911 – January 20, 1947) was born.Was the myth larger than the reality? Not really.But the applause Josh Gibson received should have been louder. He was considered the best power hitter of his era in the Negro Leagues and perhaps even the majors.Gibson was born on Dec. 21, 1911, in Buena Vista, Ga. His father moved his family to Pittsburgh in 1923 rather than try and continue to nurse a crop from his meager farm.Josh’s education ended after the ninth grade. His introduction to organized baseball came at age 16 when he joined the Gimbels A.C. In 1929, the Crawford Colored Giants, a semi-pro team in Pittsburgh, convinced him to leave the Gimbels and join their squad.He became a professional by accident July 25, 1930 while sitting in the stands. When Homestead Grays catcher Buck Ewing injured his hand, Gibson was invited to replace him because his titanic home runs were already well known in Pittsburgh.“If someone had told me Josh hit the ball a mile, I would have believed them,” said Sam Jethroe, who starred for the Cleveland Buckeyes.His legendary feats with the Homestead Grays have many experts regarding Gibson as the sport’s greatest home run hitter. Negro Leagues statistics of the time are largely incomplete, but the legend of Gibson’s power has always been larger than life.The 6-1, 220-pound Gibson was nearly indestructible behind the plate. He occasionally played left field or third base, but never for more than a game or two.Gibson’s natural skills were immense. His powerful arm, quick release and agility made base runners wary of trying to steal.But hitting is what made Gibson the second-highest paid player in black baseball behind Satchel Paige, another future Hall of Famer.The Sporting News, baseball’s written authority for decades, credited Gibson in 1967 with hitting a 580-foot home run in Yankee Stadium. The ball landed two feet from the top of the bleacher wall.“Josh was a better power hitter than Babe Ruth, Ted Williams or anybody else I’ve ever seen,” said former Cleveland Buckeye pitcher and manager Alonzo Boone. “Anything he touched was hit hard.He could power outside pitches to right field. Shortstops would move to left field when Josh came to the plate.”In 1972, Gibson was elected to the Hall of Fame. He passed away on Jan. 20, 1947.Paige may have put it best when describing Josh at the plate: “You look for his weakness and while you’re looking’ for it, he’s liable to hit 45 home runs.”Research more about this great American Champion and share it with your babies. Make it a champion day!