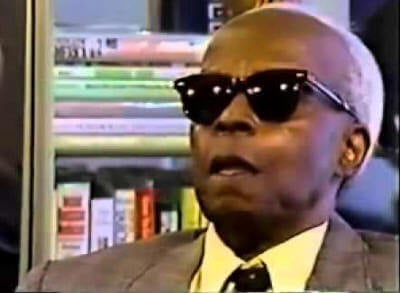 GM – FBF – Today’s American Champion was an African-American sociologist, historian and writer. He is noted for his work on African civilizations prior to encounters with Europeans; his major work is The Destruction of Black Civilization (1971/1974). Williams remains a key figure in the Afrocentrist discourse. He asserted the validity of the discredited Black Egyptian hypothesis and that Ancient Egypt was predominantly a black civilization.Today in our History – December 22, 1898 – Dr. Chancellor James Williams (1898-1992) was born.Of the recent towering figures in the struggle to completely eradicate the pervasive racial myths clinging to the origins of Nile Valley Civilization, few scholars have had the impact of Dr. Chancellor James Williams (1898-1992). Chancellor Williams, the youngest of five children, was born in Bennetsville, South Carolina December 22, 1898. His father had been a slave; his mother a cook, nurse, and evangelist. A stirring writer, Chancellor Williams achieved wide acclaim as the author of the 1971 publication, The Destruction of Black Civilization—Great Issues of a Race from 4500 B.C. to 2000 A.D.Totally uncompromising, highly controversial, broadly sweeping in its range and immensely powerful in its scope, there have been few books published during the past half-century focusing on the African presence in antiquity that have so profoundly affected the consciousness of African people in search of their historical identity. Dr. John Henrik Clarke, now an ancestor and a contemporary of Dr. Williams and one of our most outstanding scholars, described The Destruction of Black Civilization as “a foundation and new approach to the history of our race.” In The Destruction of Black Civilization Chancellor Williams successfully “shifted the main focus from the history of Arabs and Europeans in Africa to the Africans themselves–a history of the Blacks that is a history of Blacks.”The career of Chancellor Williams was spacious and varied; university professor, novelist, and author-historian. He was the father of fourteen children. Blind and in poor health, the last years of Dr. Williams’ life were spent in a nursing home in Washington, D.C.His contributions to the reconstruction of African civilization, however, stand as monuments and beacons reflecting the past, present and future of African people. Chancellor Williams began field research in African History in Ghana (University College) in 1956. His primary focus was on African achievements and autonomous civilizations before Asian and European influences. His last study in 1964 covered an astounding 26 countries and more than 100 language groups. His best known work is “The Destruction of Black Civilization: Great Issues of a Race from 4500 B.C. to 2000 A.D.” For this effort, Dr. Williams was accorded honors by the Black Academy of Arts and Letters.A little known fact about Dr. Williams is that in addition to being an historian and professor, Dr. Williams was president of a baking company, editor of a newsletter, The New Challenge, an economist, high school teacher and principal and a novelist.Dr. Williams remained a staunch advocate that African historians do independent research and investigations so that the history of African people be told and understood from their perspective. Dr. Williams stated clearly, “As long as we rely on white historians to write Black History for us, we should keep silent about what they produce.” Dr. Chancellor Williams joined the Ancestors in 1992. Research more about this great American Champion and share it with your babies. Make it a champion day!