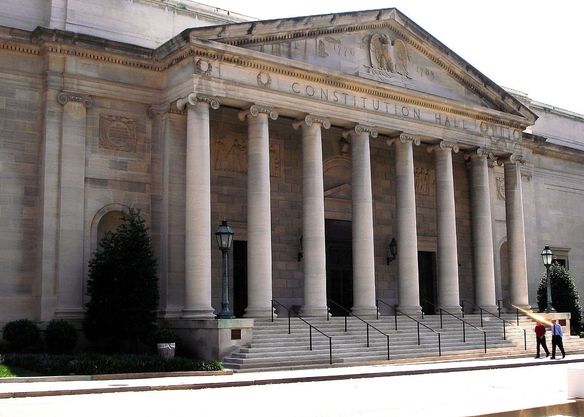 GM – FBF – Today’s American Champion was Waiting in line to register at her first Continental Congress, she crew stares from some in the throng – “They do when you’re different,” she says. Others came right up and introduced themselves in a gesture of cordiality.”I would think,” says Karen Batchelor Farmer, 26, of Detroit, the first known black member of the 87-year history of the National Society of Daughters of American Revolution, “that they are trying to make me feel at home.”For the Daughters, whose 207,000 members can trace their ancestry back to the Revolutionary War, trying to make Karen Farmer feel “at home” this week is something of a milestone which many Americans once might not have thought possible.Admission of a black to their ranks coupled with an upsurge in youthful members are indicators, be they slight, of the changes in Daughters are undergoing today. One-third of the entire membership is now in the 18-35 age group. But the older members still set the tone for the DAR’s conservative stand on political issues.Daughters of the American Revolution is a very exclusive organization, one that uses a lineage-based membership for its female members. To be eligible for membership, you have to be able to prove that you descend from a person that had ties to the United States’ Independence. Achieving membership is no easy task for some people, and it gets even harder if you have a black lineage. Because of this, DAR was sometimes viewed as a racist organization not out of fact, but out of lack of diversity.Today in our History – December 28, 1977 – Karen Batchelor Farmer is placed in the Daughters of the AMERICAN Revolution. Some of the other requirements once you get past the lineage is that you have to be personally acceptable to society and over 18 years old. The former part is a bit unusual, although there is no record of anyone being turned away for not being personally acceptable. Chapters of DAR exist in all 50 U.S. States and has even found worldwide fame with availabilities in Spain, France, Germany, Italy, Japan and even the United Kingdom. With many other locations on the map, chapters have grown in numbers in the 20th century and now boast over 180,000 members. But back in 1977 on this day of the 28th, they welcomed their first African American member.Karen Batchelor Farmer was admitted after a long genealogical research that started in 1976. It took two years for her to trace her ancestors roots back to William Hood, a patriot who served during the Revolution in the defense of Fort Freeland. Contrary to popular belief, Farmer didn’t reach out to DAR, and it was the other way around. The Ezra Parker Chapter in Michigan contacted Karen and invited her to join the chapter, shattering notions that they were a racist or bigoted organization. This was a huge news story in its day and even made it as a featured story in the New York Times. Along with a couple of interviews and television appearances, this unexpectedly became a big story for its time.Lost in the history is the role that the late James Dent Walker played, the former head of Genealogical Services at the National Archives. With this help, it was made possible, and he also served as the inspiration for Batchelor who co-founded the Fred Hart Williams Genealogical Society in the year of 1979. Karen continues to research her history and is a shining example that black history isn’t always rooted in negative periods like slavery. Research more about this great American Champion and make it a champion day!