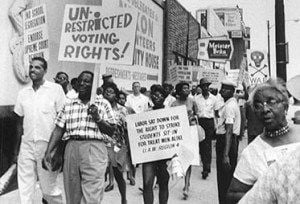 GM – FBF – Today’s American Champion event forced the American government to act On 6 August 1965 President Lyndon B. Johnson signed the Voting Rights Act into law, calling the day “a triumph for freedom as huge as any victory that has ever been won on any battlefield” (Johnson, “Remarks in the Capitol Rotunda”). The law came seven months after Martin Luther King launched a Southern Christian Leadership Conference (SCLC) campaign based in Selma, Alabama, with the aim of pressuring Congress to pass such legislation.“In Selma,” King wrote, “we see a classic pattern of disenfranchisement typical of the Southern Black Belt areas where Negroes are in the majority” (King, “Selma—The Shame and the Promise”).In addition to facing arbitrary literacy tests and poll taxes, African Americans in Selma and other southern towns were intimidated, harassed, and assaulted when they sought to register to vote. Civil rights activists met with fierce resistance to their campaign, which attracted national attention on 7 March 1965, when civil rights workers were brutally attacked by white law enforcement officers on a march from Selma to Montgomery.Today in our History – January 2, 1965 – A voter registration drive, led by Dr. Martin Luther King Jr. started in Selma, Alabama.The 1964 Civil Rights Act prohibited discrimination in employment and public accommodations. But many African Americans were denied an equally fundamental constitutional right, the right to vote.The most effective barriers to black voting were state laws requiring prospective voters to read and interpret sections of the state constitution. In Alabama, voters had to provide written answers to a 20-page test on the Constitution and state and local government. Questions included: Where do presidential electors cast ballots for president? Name the rights a person has after he has been indicted by a grand jury?In an effort to bring the issue of voting rights to national attention, Martin Luther King, Jr. launched a voter registration drive in Selma, Alabama, in early 1965. Even though blacks slightly outnumbered whites in the city of 29,500 people, Selma’s voting rolls were 99 percent white and 1 percent black.For seven weeks, King led hundreds of Selma’s black residents to the county courthouse to register to vote. Nearly 2,000 black demonstrators, including King, were jailed by County Sheriff James Clark for contempt of court, juvenile delinquency, and parading without a permit.After a federal court ordered Clark not to interfere with orderly registration, the sheriff forced black applicants to stand in line for up to five hours before being permitted to take a “literacy” test. Not a single black voter was added to the registration rolls.When a young black man was murdered in nearby Marion, King responded by calling for a march from Selma to the state capitol of Montgomery, 50 miles away. On March 7, 1965, black voting-rights demonstrators prepared to march. “I can’t promise you that it won’t get you beaten,” King told them, “… but we must stand up for what is right!”As they crossed a bridge spanning the Alabama River, 200 state police with tear gas, night sticks, and whips attacked them. The march resumed on March 21 with federal protection. The marchers chanted: “Segregation’s got to fall … you never can jail us all.” On March 25 a crowd of 25,000 gathered at the state capitol to celebrate the march’s completion. Martin Luther King, Jr. addressed the crowd and called for an end to segregated schools, poverty, and voting discrimination. “I know you are asking today, ‘How long will it take?’ … How long? Not long, because no lie can live forever.”Within hours of the march’s end, four Ku Klux Klan members shot and killed a 39-year-old white civil rights volunteer from Detroit named Viola Liuzzo. President Johnson expressed the nation’s shock and anger.”Mrs. Liuzzo went to Alabama to serve the struggle for justice,” the President said. “She was murdered by the enemies of justice who for decades have used the rope and the gun and the tar and the feather to terrorize their neighbors.”Two measures adopted in 1965 helped safeguard the voting rights of black Americans. On January 23, the states completed ratification of the 24th Amendment to the Constitution barring a poll tax in federal elections. At the time, five Southern states still had a poll tax. On August 6, President Johnson signed the Voting Rights Act, which prohibited literacy tests and sent federal examiners to seven Southern states to register black voters. Within a year, 450,000 Southern blacks registered to vote. Research more about the great American Champion event and share it with your babies. Make it a champion day!