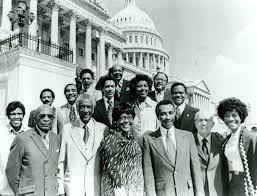 GM – FBF – Today’s American Champion event begins during the late 1960s, Rep. Charles Diggs (D-Mich.) created the Democracy Select Committee (DSC) in an effort to bring black members of Congress together.Diggs noticed that he and other African-American members of Congress often felt isolated because there were very few of them in Congress and wanted to create a forum where they could discuss common political challenges and interests.“The sooner we get organized for group action, the more effective we can become,” Diggs said.The DSC was an informal group that held irregular meetings and had no independent staff or budget but that changed a few years later. As a result of court-ordered redistricting, one of several victories of the Civil Rights Movement, the number of African-American members of Congress rose from nine to 13, the largest ever at the time, and members of the DSC decided at the beginning of the 92nd Congress (1971-1973) that a more formal group was needed.Today in our History – January 4, 1971 – The Congressional Black Caucus organized.Since its establishment in 1971, the Congressional Black Caucus (CBC) has been committed to using the full Constitutional power, statutory authority, and financial resources of the federal government to ensure that African Americans and other marginalized communities in the United States have the opportunity to achieve the American Dream. As part of this commitment, the CBC has fought for the past 48 years to empower these citizens and address their legislative concerns by pursuing a policy agenda that includes but is not limited to the following: • reforming the criminal justice system and eliminating barriers to reentry;• combatting voter suppression;• expanding access to world-class education from pre-k through post-secondary level;• expanding access to quality, affordable health care and eliminating racial health disparities;• expanding access to 21st century technologies, including broadband;• strengthening protections for workers and expanding access to full, fairly-compensated employment;• expanding access to capital, contracts, and counseling for minority-owned businesses; and• promoting U.S. foreign policy initiatives in Africa and other countries that are consistent with the fundamental right of human dignity.For the 116th Congress, the CBC has a historic 55 members of the U.S. House of Representatives and the U.S. Senate, representing more than 82 million Americans, 25.3 percent of the total U.S. population, and more than 17 million African-Americans, 41 percent of the total U.S. African-American population.In addition, the CBC represents almost a fourth of the House Democratic Caucus. The CBC is engaged at the highest levels of Congress with members who serve in House leadership. Representative James E. Clyburn (D-SC) serves as the Majority Whip in the House of Representatives, Representative Hakeem Jeffries (D-NY) serves as Chairman of the House Democratic Caucus and Representative Barbara Lee (D-CA) serves as co-chair of the House Democratic Steering and Policy Committee. In addition, five CBC members serve as chairs on full House committees, and 28 CBC members serve as chairs on House subcommittees.While the CBC has predominately been made up of members of the Democratic Party, the founding members of the caucus envisioned a non-partisan organization. Consequently, the CBC has a long history of bipartisan collaboration and members who are both Democrat and Republican.As founding member Rep. William L. Clay, Sr. said when the CBC was established, “Black people have no permanent friends, no permanent enemies…just permanent interests.” Research more about this American Champion organization and share it with your babies. Make it a champion day!