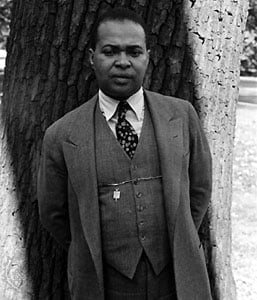 GM – FBF – Today’s American Champion was an American poet, novelist, children’s writer, and playwright, particularly well known during the Harlem Renaissance.Today in our History – January 9, 1946 – Countee Cullen (born Countee LeRoy Porter; May 30, 1903 – January 9, 1946) died.Countee Cullen, a poet who rose to fame during the Harlem Renaissance, was a contemporary of famed writer Zora Neale Hurston. Cullen amassed an impressive body of work in a short period of time, moving to becoming a teacher for the latter part of his career. Cullen died on this day in New York in 1946 at the young age of 42.The details of Cullen’s early life are murky, with many scholars agreeing he was born around May 30, 1903. His place of birth has also been a mystery, with claims that he was either born in Lexington, Ky.; New York; or Baltimore, Md. It appears, however, that Cullen claimed New York as his place of birth, which is where he also found his footing as a writer and poet.As a teenager, Cullen came under the care of Reverend Frederick A. Cullen, the pastor of Salem Methodist Episcopal Church; Rev. Cullen would later lead the Harlem chapter of the NAACP. Influenced by the happenings around him, Cullen excelled in high school and entered in to New York University after graduating in 1922.Honing his writing and speaking abilities in high school, Cullen found notoriety at NYU after winning the Witter Byner undergraduate poetry contest in 1923, which was sponsored by the Poetry Society of America. Coming in at second place, Cullen would continue to pen works that were published nationally in a series of poetry publications. In 1925, Cullen won the Witter Byner first place prize, the same year he eventually entered in to Harvard University.Race formed the theme of Cullen’s first published work, “Colors,” and was released while he pursued his Master’s degree in English. The book featured two of Cullen’s most-notable poems in “Heritage” and “Incident.”After graduating from Harvard in 1926, Cullen’s professional career began. It was a turbulent time for Cullen, who worked furiously on a series of poetry collections while editing the popular Caroling Dusk collection as well. In 1928, he received a Guggenheim to write poetry in France and then married Nina Yolande DuBois, the daughter of W. E. B. DuBois. After 1930, Cullen’s work as a poet began to shrink and he focused instead on teaching French and English at New York’s Fredrick Douglass Junior High School. Cullen still wrote, penning his only novel, “One Way To Heaven,” which was published in 1932. Cullen wrote and translated works for the theater and also released a pair of written works for young readers. Research more about this great American Champion and share it with your babies. Make it a champion day!