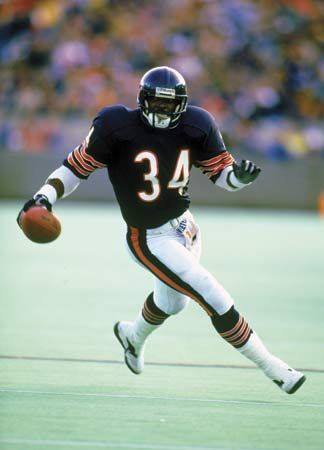 GM – FBF – Today’s American Champion was an American professional football player who was a running back for the Chicago Bears of the National Football League (NFL) for 13 seasons. He is regarded as one of the greatest running backs of all time.A nine-time Pro Bowl selectee, Payton is remembered as a prolific rusher, once holding records for career rushing yards, touchdowns, carries, yards from scrimmage, all-purpose yards, and many other categories. He was also versatile, and retired with the most receptions by a non-receiver, and had eight career touchdown passes. He was elected into the Pro Football Hall of Fame in 1993, the Mississippi Sports Hall of Fame that same year, and the College Football Hall of Fame in 1996. He was named to the NFL 75th Anniversary All-Time Team in 1994, and the NFL 100th Anniversary All-Time Team in 2019. Hall of Fame NFL player and coach Mike Ditka described Payton as the greatest football player he had ever seen—but even greater as a human being. Payton began his football career in Mississippi, and went on to have an outstanding collegiate football career at Jackson State University, where he was an All-American. He started his professional career with the Chicago Bears in 1975, who selected him with the 1975 Draft’s fourth overall pick. Payton proceeded to win the 1977 AP NFL Most Valuable Player Award and won Super Bowl XX with the 1985 Chicago Bears. He retired from football at the end of the 1987 season having rushed for at least 1,200 yards in 10 of his 13 seasons in the NFL.After struggling with the rare liver disease primary sclerosing cholangitis for several months, Payton died on November 1, 1999, aged 45, from cholangiocarcinoma. His legacy includes being the namesake of the Walter Payton Man of the Year Award, Walter Payton Award, and a heightened awareness of the need for organ donations.Today in our History – January 10, 1988 – The Bears officially retired Walter Payton’s jersey when he quit football. Walter Payton was an American footballer who played for the Chicago Bears. He was born in Columbia, Mississippi on July 25, 1953 to Peter and Alyne Payton. He had two siblings and was a member of the Boy Scouts, Little League, and the local church. He also played in the marching band at his high school, and participated in the track team as well as the school choir. He wanted to play football in high school, but because his brother Eddie was also on the team, he refrained from playing in order to avoid competing with his brother. After his brother graduated, Payton’s coach asked him to try out for the team and he did so but only on the condition that he be allowed to continue with the band. Once Payton got selected to the team, he was an immediate success. Despite the disadvantage of his relatively small build of 5 ft 10 in, Payton’s speed and strength made him an asset to the team.The year that Payton started playing, his high school was integrated with a neighboring high school, and their head coach was made the assistant coach at the new school. To protest this decision, Payton and some of his teammates boycotted some matches the following season, but returned to play in the fall. He went on to earn state-wide honors as a member of Mississippi’s all-state team and led his school to a victorious season. Following in his older brother Eddie’s footsteps, he enrolled at Jackson State University, where they both played football. This was a team laden with future football stars such as Jerome Barkum, Robert Brazile, and Jackie Slater.In 1973, Walter Payton was selected for the All-American Team and was named “Black College Player of the Year” the next year. He was a popular member of the team which earned him the nickname “Sweetness”. He graduated in 1975 with a Bachelor’s degree in Communications. He has since been inducted into the College Football Hall of Fame. His professional career lasted from 1975 till 1987. He made his career with the Chicago Bears, who drafted him in the first round of the 1975 NFL Draft. The Bears had been on a losing streak when he joined. At first he got very little time on the field but soon began to make his mark. He was selected to play in the 1977 Pro Bowl, and chosen the Pro Bowl Most Valuable Player.The team continued to struggle, and the management replaced the coach Neill Armstrong with Mike Ditka, which significantly improved their win loss record. In 1984, Payton broke Jim Brown’s record of rushing more than 12,312 yards. When he retired, he held the record for most yards rushed by any NFL player in history, i.e. 16,726 yards, and had also scored 110 touchdowns. He had set several team records as well, such as most career rushing yards, receptions, touchdowns, and touchdown passes by a running back. The Bears officially retired his jersey when he quit football on January 10, 1988.Unlike other players, Walter Payton refused to celebrate or cheer on the field after scoring a touchdown. Instead, he just handed the ball to an official or another player and moved on.After his retirement, he invested in a couple of businesses before he was diagnosed with a rare autoimmune disease that claimed his life in November 1999 at the age of 46. He is survived by his widow and two children.His autobiography, published posthumously, is titled “Never Die Easy”. Research more about this great American Champion and share it with your babies. Make it a champion day!