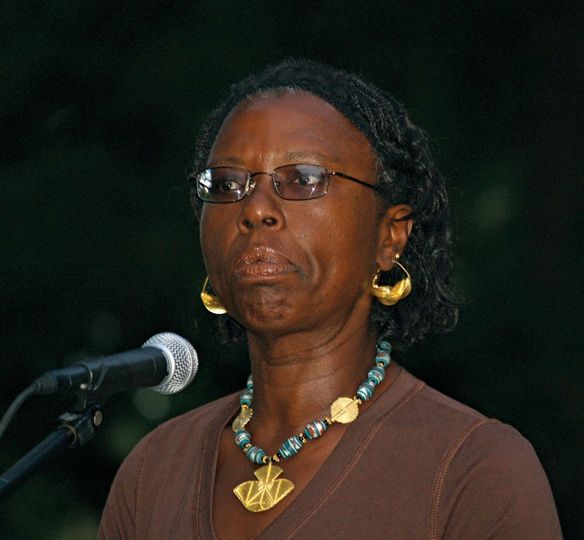 GM – FBF – Today’s American Champion was an American novelist, known for novels including The Women of Brewster Place (1982), Linden Hills (1985) and Mama Day (1988).Today in our History – January 25, 1950 Gloria Naylor (January 25, 1950 – September 28, 2016) was born.Naylor was born in New York on January 25, 1950, the oldest child of Roosevelt Naylor and Alberta McAlpin. The Naylors, who had been sharecroppers in Robinsonville, Mississippi, had migrated to Harlem to escape life in the segregated South and seek new opportunities in New York City. Her father became a transit worker; her mother, a telephone operator. Even though Naylor’s mother had little education, she loved to read, and encouraged her daughter to read and keep a journal. Before her teen years, Gloria began writing prodigiously, filling many notebooks with observations, poems, and short stories. In 1963, Naylor’s family moved to Queens and her mother joined the Jehovah’s Witnesses. An outstanding student who read voraciously, Naylor was placed into advanced classes in high school, where she immersed herself in the work of nineteenth century British novelists.Her educational aspirations, however, were delayed by the shock of the assassination of Dr. Martin Luther King Jr. in her senior year. She decided to postpone her college education, becoming a missionary for the Jehovah’s Witnesses in New York, North Carolina, and Florida instead. She left seven years later as “things weren’t getting better, but worse.” From 1975 to 1981 Naylor attended Medgar Evers College and then Brooklyn College while working as a telephone operator, majoring in nursing before switching to English. It was at that time that she read Toni Morrison’s novel The Bluest Eye, which was a pivotal experience for her. She began to avidly read the work of Zora Neale Hurston, Alice Walker, and other black women novelists, none of which she had been exposed to previously. She went on to earn an M.A. in African-American studies at Yale University; her thesis eventually became her second published novel, Linden Hills. Naylor earned her bachelor’s degree in English at Brooklyn College of the City University of New York in 1981. She obtained a master’s degree in African American Studies from Yale University in 1983. She was an honorary member of Delta Sigma Theta sorority.Naylor’s debut novel, The Women of Brewster Place, was published in 1982 and won the 1983 National Book Award in the category First Novel. It was adapted as a 1989 television miniseries of the same name by Oprah Winfrey’s Harpo Productions.Naylor’s work is featured in such anthologies as Breaking Ice: An Anthology of Contemporary African-American Fiction (ed. Terry McMillan, 1990), Calling the Wind: Twentieth-Century African-American Short Stories (ed. Clarence Major, 1992) and Daughters of Africa (ed. Margaret Busby, 1992).During her career as a professor, Naylor taught writing and literature at several universities, including George Washington University, New York University, Boston University, University of Kent, University of Pennsylvania and Cornell University. In 1989 Naylor was the Zale Writer-In-Residence at Newcomb College of Tulane University. There she performed a reading of her works as well as being publicly interviewed by Filipe Smith of the Tulane English Department. In 2009, Naylor donated her archives to Sacred Heart University. The collection is currently on loan at Lehigh University for digitization. Naylor died of a heart attack on September 28, 2016, while visiting St. Croix, United States Virgin Islands. She was 66. During her studies at Brooklyn College, Naylor became immersed in the works of African-American female authors such as Zora Neale Hurston, Alice Walker, and especially Toni Morrison. Drawing inspiration from these authors, Naylor began writing stories centered on the lives of African-American women, which resulted in her first novel, The Women of Brewster Place. Research more about this great American Champion and share it with your babies. Make it a champion day!