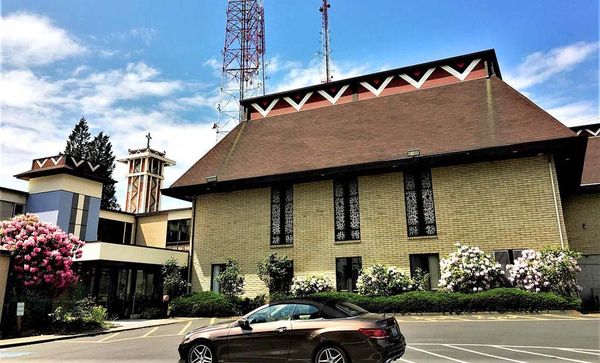 GM – FBF – Today’s American Champion event started in 1890, one year after Washington became a state and thirty-eight years after Seattle was established as a city, a small group of African Americans held prayer services in their homes. These prayer services became the Mount Zion Baptist Church. Some of the church founders had been members of the predominantly white congregation of the First Baptist Church. Mount Zion’s founders received assistance from Rev. George T. Burchett, pastor, Deacon John Keith and the members of the First Baptist Church who donated the use of a store at 14th Avenue and East Madison Street for Sunday School and worship services.Prior to 1920, Mount Zion’s members worshiped at several locations including the Peoples Church at 3rd and East Madison (1896), 2nd and Spring (1899), and 9th and Olive (1903).In 1906, Mount Zion’s first building was erected when property was purchased at 11th and Union; it was a one room wooden structure.A pot-bellied stove in the center of the room provided heating; backless benches were used for pews. The Mount Zion church building was later elevated on stilts to create space for a partial basement used primarily as a dining facility and fellowship hall.During the first twenty-two years of the church’s history Mount Zion had many pastors resulting in considerable fluctuation in the church’s membership. The following minister’s served for periods ranging from three months to two years: Reverend R. W. Jennison, Reverend Simons, Reverend J.C. Pegram, Reverend Price, Reverend Eugene Harris, Reverend George Maney, Reverend Gordon McPherson, Reverend Walker, Reverend Wiggins, Reverend R. H. Thomas, Reverend Lyman Smith, Reverend William Hammond, and Reverend William Berry.Today in our History – February 18, 1894 – Mount Zion Baptist Church was organized in Seattle, Washington.Home to the largest African American congregation in the state of Washington, Mount Zion Baptist Church was organized in Seattle on February 18, 1894. Led by Reverend Hesekiah C. Rice, eight founding members initially met in a rented hall on the campus of the University of Washington, which was in what is now downtown Seattle. Although many churches in Seattle were racially integrated during this period, some black parishioners wanted a more expressive environment within which to worship.Mount Zion experienced tremendous instability in its leadership and location between 1894 and 1907. Numerous pastors passed though the church, sometimes as frequently as one each year. In addition, Mount Zion’s address changed no fewer than five times during this period. Finally, a church building was constructed on land purchased at the corner of 11th Avenue and Union Street in 1907. In 1918 the church bought a parcel of land at 19th Avenue and East Madison Street. Construction began in 1920 on the building that still houses Mount Zion today.Church leadership, which had been transient for years, stabilized as well. Mount Zion had just six pastors between 1912 and 1957. They were Reverend W. D. Carter (1912-1925), Reverend J. Sterling Moore (1926-1932), Reverend Taylor M. Davis (1932-1940), Reverend Fountain W. Penick (1940-1942), Reverend F. Benjamin Davis (1942-1954), and Reverend Gil B. Lloyd (1955-1957). Many of these ministers played an active role in the larger community. Rev. Penick was considered an early civil rights activist and Rev. Davis was a candidate for the Seattle City Council in 1946, garnering 27,000 votes in his losing bid, which took place in an era when there were fewer than 3,500 black voters in the city.During World War II Seattle’s African American population grew rapidly as labor shortages forced companies like Boeing to integrate their workforces. The corresponding growth in Mount Zion’s membership made space an issue, and would eventually lead to additions to and redesigns of the original sanctuary.In 1958 Reverend Samuel Berry McKinney became the pastor of Mount Zion, a position he held until 1998. During the 1960s under McKinney’s leadership, Mount Zion became a major force in the local civil rights campaign. Dr. Martin Luther King, Jr. made his only visit to Seattle in November, 1961 as part of a lecture series sponsored by Mount Zion. On July 1, 1963 Rev. McKinney led 400 marchers from Mt. Zion to Seattle’s City Hall to support an open housing ordinance in Seattle. During a boycott of the Seattle schools in spring of 1966 to protest ongoing racial segregation, over 500 children showed up to attend a ‘Freedom School’ that was being hosted at Mount Zion. Later in the 1960s, McKinney aligned himself with ‘radical’ Black Power elements in Seattle who challenged integration as the primary objective of the black community. In 1975 the church embraced an African-themed redesign. Through McKinney’s tenure, church membership grew from roughly 800 to more than 3,000.Reverend Leslie Braxton was selected as Mount Zion’s Senior Pastor following McKinney’s retirement in 1998. Turmoil within the congregation led to Braxton’s resignation in 2005, and McKinney was unanimously voted to return as pastor on an interim basis. In 2008 Reverend Aaron Williams became Mount Zion Baptist Church’s 24th pastor. Research more about this great American Champion organization and share it with your babies. Make it a champion day!