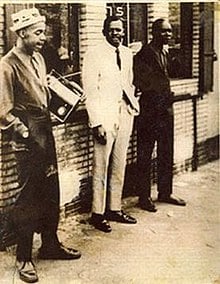 GM – FBF – Today’s American Champion was an American religious leader and the founder of the Five-Percent Nation. He was born in Virginia and moved to New York City as a young man, before serving in the United States Army during the Korean War. After returning to New York, he learned that his wife had joined the Nation of Islam (NOI) and followed her, taking the name Clarence 13X. He served in the group as a security officer, martial arts instructor, and student minister before leaving for an unclear reason in 1963. He enjoyed gambling, which was condemned by the NOI, and disagreed with the NOI’s teachings that Wallace Fard Muhammad was a divine messenger.After leaving the NOI, Clarence 13X formed a new group with other former members. He concluded that all black men were divine and took the name Allah to symbolize this status. He rejected the belief in an invisible God, teaching that God could be found within each black man. In his view, women were “earths” that complemented and nurtured men; he believed that they should be submissive to men. He and a few assistants retained some NOI teachings and pioneered novel interpretations of them. They devised teachings about the meaning of letters and numerals: understanding the meaning of each letter and number was said to provide deep truths about God and the universe. Clarence 13X referred to his new movement as the Five Percenters, referencing a NOI teaching that only five percent of the population knew and promoted the truth about God. One way that he distinguished his group from his previous faith was by rejecting dress codes or strict behavioral guidelines—he allowed the consumption of alcohol, and at times, the use of illegal drugs.Clarence 13X was shot by an unknown assailant in 1964 but survived the attack. After an incident several months later in which he and several of his followers vandalized stores and fought with police, he was arrested and placed in psychiatric care. He was diagnosed with paranoid schizophrenia. He referred to himself as “Allah”, which had become his preferred name. He was released from custody after a 1966 ruling by the Supreme Court placed limits on confinement without trial. Although he initially taught his followers to hate white people, he eventually began to cooperate with white city leaders. They gave him funding for a night school, and in return, he tried to prevent violence in Harlem. Clarence 13X was fatally shot in June 1969; the identity of his killer is unknown. The mayor of New York City and several other prominent leaders expressed condolences to his followers. Although the Five Percenters faltered in the immediate aftermath of his death, the movement rebounded after new leadership emerged. The group took a non-hierarchical approach to leadership, and no single leader replaced Clarence 13X. He has been held in high regard by Five Percenters, who celebrate his birthday as a holiday.Today in our History – February 22, 1928 – Clarence Edward Smith is born.Back when he was Clarence 13X, he learned about the Nation’s catechism, the Supreme Wisdom Lessons. The lessons taught him that there was no god, at least not in the traditional Judeo-Christian-Islamic sense, as an unseen Creator somewhere in the clouds. God was only a “mystery god,” a prop used to keep the masses from rising up against their kings and slavemasters.He began to study the Nation’s Lessons, which led him to question the Nation itself. Even if he was a god, according to the Nation, he was not yet “Allah.” The title belonged only to the “best knower,” the self-perfected scientist, Master Fard, whose picture hung on the mosque wall. In the Nation’s theology, each Allah was a mortal man who experienced birth and death like all men. After one Allah died, he was replaced by another.The lessons warned that the evil 10 percent would enslave the masses with invisible gods while using the names of righteous prophets to shield their “dirty religion.” However, things within the Nation was beginning to look different to Clarence 13X. The Nation was supposed to be the enlightened Five Percent; but within that Five Percent, he observed a further division of five, 10, and 85.Eventually, Clarence 13X realized he had no use for Elijah Muhammad or Fard. After three years as a Muslim, he dropped the X and left the mosque, but he took the lessons with him. He shared the Nation’s secret teachings with whoever would listen. He was well-respected throughout his neighborhood and therefore, became “Allah.” He often encouraged young people to get a good education or some type of vocational trade.One year after Dr. King was assassinated, so was “Allah.” He was filled with bullets in a project elevator, but his nation of young followers, known as the Five Percenters, held on to his teachings. By the start of the 1980s, the Five Percenters were an established fixture on the streets of all five boroughs. Research more about this great American Champion and share it with your babies. Make it a champion day!