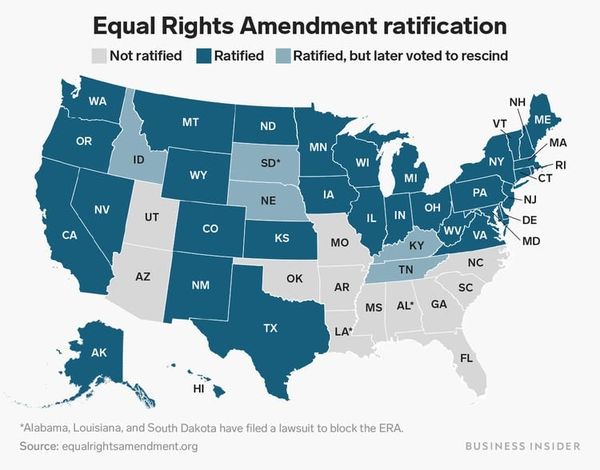 GM – FBF – Today’s American Champion event is the Equal Rights Amendment passed by Congress. It is a proposed amendment to the United States Constitution designed to guarantee equal legal rights for all American citizens regardless of sex. It seeks to end the legal distinctions between men and women in matters of divorce, property, employment, and other matters. The first version of an ERA was written by Alice Paul and Crystal Eastman and introduced in Congress in December 1923 In the early history of the Equal Rights Amendment, middle-class women were largely supportive, while those speaking for the working class were often opposed, pointing out that employed women needed special protections regarding working conditions and employment hours. With the rise of the women’s movement in the United States during the 1960s, the ERA garnered increasing support, and, after being reintroduced by Representative Martha Griffiths in 1971,it was approved by the U.S. House of Representatives on October 12, 1971, and by the U.S. Senate on March 22, 1972, thus submitting the ERA to the state legislatures for ratification, as provided for in Article V of the U.S. Constitution.Congress had originally set a ratification deadline of March 22, 1979, for the state legislatures to consider the ERA. Through 1977, the amendment received 35 of the necessary 38 state ratifications.[note 2] With wide, bipartisan support (including that of both major political parties, both houses of Congress, and presidents Richard Nixon, Gerald Ford, and Jimmy Carter) the ERA seemed destined for ratification until Phyllis Schlafly mobilized conservative women in opposition. These women argued that the ERA would disadvantage housewives, cause women to be drafted into the military and to lose protections such as alimony, and eliminate the tendency for mothers to obtain custody over their children in divorce cases. Many labor feminists also opposed the ERA on the basis that it would eliminate protections for women in labor law, though over time more and more unions and labor feminist leaders turned toward supporting it.Five state legislatures (Idaho, Kentucky, Nebraska, Tennessee, and South Dakota) voted to revoke their ERA ratifications. The first four rescinded before the original March 22, 1979, ratification deadline, while the South Dakota legislature did so by voting to sunset its ratification as of that original deadline. However, it remains an unresolved legal question as to whether a state can revoke its ratification of a federal constitutional amendment.In 1978, Congress passed (by simple majorities in each house), and President Carter signed, a joint resolution with the intent of extending the ratification deadline to June 30, 1982. Because no additional state legislatures ratified the ERA between March 22, 1979, and June 30, 1982, the validity of that disputed extension was rendered academic.Since 1978, attempts have been made in Congress to extend or remove the deadline.In the 2010s, due in part to fourth-wave feminism and the Me Too movement, interest in getting the ERA adopted was revived.[8][9] In 2017, Nevada became the first state to ratify the ERA after the expiration of both deadlines,[10] and Illinois followed in 2018.[11] In 2020, Virginia’s General Assembly passed a ratification resolution for the ERA,[12][13] claiming to bring the number of ratifications to 38. However, experts and advocates have acknowledged legal uncertainty about the consequences of the Virginian ratification, due to expired deadlines and five states’ revocations.[Today in our History – March 22, 1972 – On March 22, 1972, the Equal Rights Amendment is passed by the U.S. Senate and sent to the states for ratification.First proposed by the National Woman’s political party in 1923, the Equal Rights Amendment was to provide for the legal equality of the sexes and prohibit discrimination on the basis of sex.More than four decades later, the revival of feminism in the late 1960s spurred its introduction into Congress. Under the leadership of U.S. Representative Bella Abzug of New York and feminists Betty Friedan and Gloria Steinem, it won the requisite two-thirds vote from the U.S. House of Representatives in October 1971. In March 1972, it was approved by the U.S. Senate and sent to the states.Hawaii was the first state to ratify what would have been the 27th Amendment, followed by some 30 other states within a year. However, during the mid-1970s, a conservative backlash against feminism eroded support for the Equal Rights Amendment, which ultimately failed to achieve ratification by the a requisite 38, or three-fourths, of the states.Because of the rejection of the Equal Rights Amendment, sexual equality, with the notable exception of when it pertains to the right to vote, is not protected by the U.S. Constitution. However, in the late 20th century, the federal government and all states have passed considerable legislation protecting the legal rights of women. The Equal Rights Amendment, in its most recently proposed form, reads, “Equality of rights under the law shall not be denied or abridged by the United States or any State on account of sex.” Research more about this great American Champion event and share it with your babies. Make it a champion day!