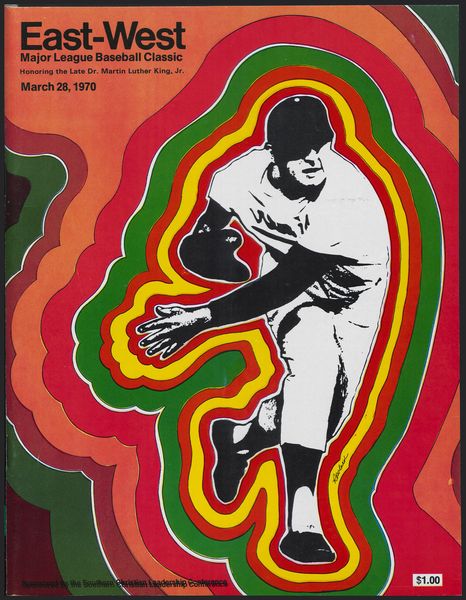 GM – FBF – Today’s American Champion event took place to honor, the Rev. Martin Luther King, Jr. and the work that he had done while here on earth. Sports fans may remember and most people who are not sports fans never knew about this huge event.Today in our History – March 28, 1970 – The East-West Major League Baseball Classic took place at 2 p.m. before 31,694 fans at Dodger Stadium, including Hall of Famer Jackie Robinson, on a sunny and warm Saturday afternoon.it was announced that an East-West all-star exhibition game was scheduled for March 28, 1970, at Dodger Stadium, the proceeds going toward the programs of the SCLC and the Dr. Martin Luther King Memorial Center being established in Atlanta.The game, which pitted players from the Eastern Divisions of both leagues against players from the two Western Divisions, featured two players from each of the 24 major league clubs.The starting lineups were selected by members of the Los Angeles-Anaheim chapter of the Baseball Writers’ Association of America and the Southern California Sportscasters Association.Inside in the game program, Baseball Commissioner Bowie Kuhn, in an open letter to SCLC President Rev. Ralph Abernathy, wrote, in part, “It seems only right that Baseball should pause today to pay tribute to one of the great disciples of integration and brotherhood, a recipient of the Nobel Peace Prize, Dr. Martin Luther King, Jr.“As Commissioner of Baseball, and as an American, I am proud to give my blessing to this classic which demonstrates that Baseball is democracy at work.”Before the game, a taped recording of part of Dr. King’s famous “I Have a Dream” speech was played, pitcher Jim “Mudcat” Grant of the Athletics sang a soulful version of the National Anthem from center field, and Coretta Scott King, widow of Dr. King, threw out the first ball to Reds Hall of Fame catcher Johnny Bench.The crowd was addressed by Rev. H.H. Brookins, president of the SCLC West; Rev. Abernathy, Dr. King’s successor as SCLC president; and Baseball Commissioner Kuhn.A pair of Hall of Famers served as the day’s managers, with Joe DiMaggio, the great Yankees center fielder, skippering the East squad, assisted by coaches Billy Martin, Satchel Paige, Stan Musial and John McNamara. Roy Campanella, the Brooklyn Dodgers catcher paralyzed in a 1958 automobile accident, managed the West stars, with Sandy Koufax, Don Drysdale, Don Newcombe and Elston Howard serving as his coaches.Tom Seaver of the Mets, the reigning National League Cy Young Award winner, picked up the win, starting for the East and tossing three scoreless innings in a 5-1 victory. Working behind home plate was Emmett Ashford, big league baseball’s first African-American umpire.Research more about this American Champion event and share it with your babies. Make it a champion day!