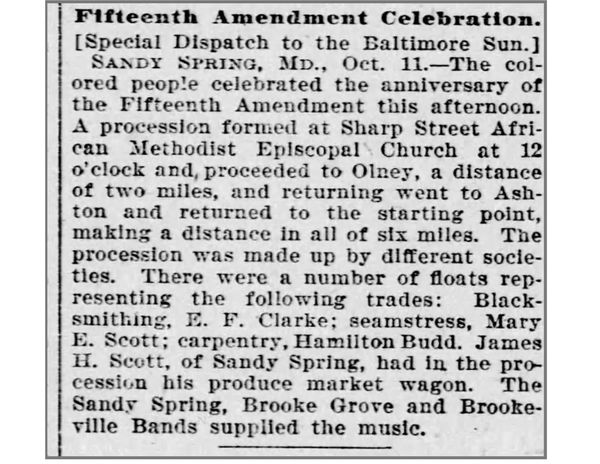 GM – FBF – Today’s American Champion event was added to the U.S. Cons tuition to the United States Constitution prohibits the federal government and each state from denying a citizen the right to vote based on that citizen’s “race, color, or previous condition of servitude.” It was ratified on February 3, 1870, as the third and last of the Reconstruction Amendments.In the final years of the American Civil War and the Reconstruction Era that followed, Congress repeatedly debated the rights of the millions of former black slaves. By 1869, amendments had been passed to abolish slavery and provide citizenship and equal protection under the laws, but the election of Ulysses S. Grant to the presidency in 1868 convinced a majority of Republicans that protecting the franchise of black male voters was important for the party’s future. On February 26, 1869, after rejecting more sweeping versions of a suffrage amendment, Congress proposed a compromise amendment banning franchise restrictions on the basis of race, color, or previous servitude. After surviving a difficult ratification fight, the amendment was certified as duly ratified and part of the Constitution on March 30, 1870.United States Supreme Court decisions in the late nineteenth century interpreted the amendment narrowly. From 1890 to 1910, southern states adopted new state constitutions and enacted laws that raised barriers to voter registration. This resulted in most black voters and many poor white ones being disenfranchised by poll taxes and discriminatory literacy tests, among other barriers to voting, from which white male voters were exempted by grandfather clauses. A system of white primaries and violent intimidation by white groups also suppressed black participation.In the twentieth century, the Court began to interpret the amendment more broadly, striking down grandfather clauses in Guinn v. United States (1915) and dismantling the white primary system in the “Texas primary cases” (1927–1953). Voting rights were further incorporated into the Constitution in the Nineteenth Amendment (voting rights for women) and the Twenty-fourth Amendment (prohibiting poll taxes in federal elections). The Voting Rights Act of 1965 provided federal oversight of elections in discriminatory jurisdictions, banned literacy tests and similar discriminatory devices, and created legal remedies for people affected by voting discrimination. The Court also found poll taxes in state election unconstitutional under the Fourteenth Amendment in Harper v. Virginia State Board of Elections Today in our History – March 30, 1870 – the 15th amendment was certified as duly ratified and part of the U.S. Constitution.Following its ratification by the requisite three-fourths of the states, the 15th Amendment, granting African American men the right to vote, is formally adopted into the U.S. Constitution.Passed by Congress the year before, the amendment reads, “the right of citizens of the United States to vote shall not be denied or abridged by the United States or by any State on account of race, color, or previous condition of servitude.” One day after it was adopted, Thomas Peterson-Mundy of Perth Amboy, New Jersey, became the first African American to vote under the authority of the 15th Amendment.In 1867, the Republican-dominated Congress passed the First Reconstruction Act, over President Andrew Johnson’s veto, dividing the South into five military districts and outlining how new governments based on universal manhood suffrage were to be established. With the adoption of the 15th Amendment in 1870, a politically mobilized African American community joined with white allies in the Southern states to elect the Republican Party to power, which brought about radical changes across the South. By late 1870, all the former Confederate states had been readmitted to the Union, and most were controlled by the Republican Party, thanks to the support of African American voters.In the same year, Hiram Rhodes Revels, a Republican from Natchez, Mississippi, became the first African American ever to sit in Congress. Although African American Republicans never obtained political office in proportion to their overwhelming electoral majority, Revels and a dozen other African American men served in Congress during Reconstruction, more than 600 served in state legislatures, and many more held local offices.However, in the late 1870s, the Southern Republican Party vanished with the end of Reconstruction, and Southern state governments effectively nullified the 14th and 15th Amendments, stripping Southern African Americans of the right to vote. It would be nearly a century before the nation would again attempt to establish equal rights for African Americans in the South. Research more about this great American Champion event and share it with your babies. Make it a champion day!