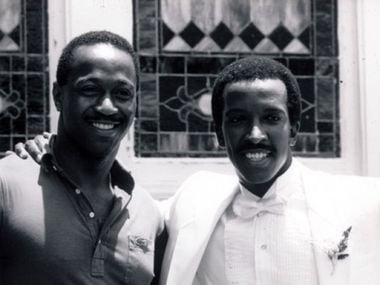 GM – FBF – Today’s American Champion in 1982, he was a black engineer, was convicted for the armed robbery of a fast-food restaurant near Dallas, Texas, and sentenced to life imprisonment. This occurred despite conflicts in eyewitness testimony, co-workers’ claims that he was at work at the time of the robbery, and his lack of a prior criminal record. Devoting half of its broadcast to the case, the 60 Minutes team, including executive producer Don Hewitt, producer Suzanne St. Pierre, and correspondent Morley Safer, carefully retraced the events leading to his arrest and conviction.As a result of its investigation, which produced new witnesses and revealed a number of prosecution errors and omissions, He was granted his release in March 1984. For continuing its tradition of excellence in investigative reporting, a Peabody to CBS News’ 60 Minutes: Lenell Geter’s in Jail.Today in our History – April 2, 1982 – Lenell Genter is arrested for armed robbery.In early 1982, a group of six black aerospace engineers, who had recently graduated from South Carolina State University, moved to the predominantly white city of Greenville, Texas, to begin engineering jobs at a large military defense contractor called E-Systems, Inc. Shortly thereafter, a string of armed robberies occurred in the greater Greenville area, including the robberies of a Taco Bell and a Kentucky Fried Chicken in Greenville, and the August 1982 robbery of $615 from a Kentucky Fried Chicken in nearby Balch Springs, Texas.A woman contacted the Greenville police to report having seen two black men sitting in a Volkswagen with a South Carolina license plate, parked at a park two miles away from the Greenville Kentucky Fried Chicken on the day that restaurant was robbed. This car was registered to Lenell Geter, one of the six engineers from South Carolina State University. Geter was 25 years old and engaged to be married in a few months. Greenville Police Detective James Fortenberry obtained a photo of Geter and showed it to the workers at the Taco Bell that had been robbed. One Taco Bell worker hesitantly identified Geter as the robber, and three workers at the Balch Springs KFC later identified him as well. In August 1982, Geter was arrested for robbery, and his roommate, Anthony Williams, another E-Systems engineer, was arrested as his accomplice.Geter hired an attorney, but after a dispute with Geter’s parents, the attorney quit. Geter was then represented by court-appointed attorney Edwin Sigel, who advised him to plead guilty in order to receive leniency in his sentencing. Geter, who had continually insisted that he was innocent, refused to plead.Nine of Geter’s colleagues at E-Systems were able to testify that he was at work on the day of the robberies in question. Though none of his co-workers reported having seen Geter at the precise time of the robbery, Geter’s boss had given him an assignment just before the time of the Balch Springs Kentucky Fried Chicken robbery, located fifty miles away from the E-Systems office, and Geter had returned the completed assignment to the boss a few hours later. “We’re not bleeding hearts, we’re conservative engineers who want criminals punished,” said Ed Garrett, the director of Geter’s division at E-Systems. “But there’s not a shred of evidence that [Geter and Williams] are guilty of a crime. No one wants to call it a racial problem, but if they were white, they would not be in this situation.”Geter emphatically maintained that he was innocent. His co-workers described him as a kind, well-mannered man who read the Bible during his lunch hour, and there was no evidence to link him to the robberies other than the identifications made by several eyewitnesses. Nonetheless, Geter’s all-white jury found him guilty and sentenced him to life in prison. Anthony Williams was tried for another hold-up thought to have been part of the same string of robberies, but he was acquitted.Following his conviction, Geter’s legal representation was taken over by the NAACP. There was a great deal of public attention and media focus on Geter’s case, including a feature episode of “60 Minutes.” His new attorneys succeeded in showing that some of the police testimony at trial was false.They also found two new E-Systems employee witnesses who had seen Geter in his office at the time of the robbery. Another person – Jerry Jerome Stepney, who was serving prison time for a different armed robbery – was implicated in the Kentucky Fried Chicken robberies and identified by four of the five eyewitnesses who had previously identified Geter. Stepney, who bore a physical resemblance to Geter, failed a lie detector test with regard to the robbery of the Kentucky Fried Chicken in Balch Springs. Geter’s conviction was overturned and, in December 1983, he was released from prison while awaiting his new trial, which was scheduled to begin on April 9, 1984. Instead of being retried, Geter’s indictment was dismissed on March 26, 1984.Shortly after his release, Geter married his fiancée Marcia. The following year, he filed an $18 million lawsuit for his wrongful conviction against the DA and the police officers and municipalities involved. He received a $50,000 settlement from the City of Greenville.In 1987, the story of Lenell Geter’s wrongful conviction was made into a motion picture called “Guilty of Innocence.” Geter later became a church deacon, author and professional development coach, and he helped to found a nonprofit organization called Justice Denied Research Inc.