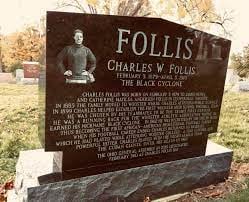 GM – FBF – Today’s American Champion was the first Black professional American football player. He played for the Shelby Blues of the “Ohio League” from 1902 to 1906. On September 16, 1904, he signed a contract with Shelby making him the first Black man contracted to play professional football on an integrated team. He was also the first Black catcher to move from college baseball into the Negro leagues. Today in our History – April 15, 1910 – Charles W. Follis, a.k.a. “The Black Cyclone,” (February 3, 1879 – April 15, 1910) died.The first African American professional football player, Charles W. Follis, was born February 3, 1879, in Cloverdale, Virginia. The Follis family moved to Wooster, Ohio, where he attended Wooster High School and participated in organizing and establishing the first varsity football team. He played right halfback and served as team captain on a squad that had no losses that year.In1901, Follis entered the College of Wooster. Rather than playing football for the college, he played for the town’s amateur football team – the Wooster Athletic Association, where he earned the nickname of the “Black Cyclone from Wooster.”In 1902, Frank C. Schieffer, manager of the Shelby Athletic Club secured employment for Follis at Howard Seltzer and Sons Hardware Store in rural Shelby, Ohio. The six-foot, 200-pound Follis played for Shelby in 1902 and 1903.In 1904, Follis signed a contract with the Shelby Athletic Club, later the Shelby Blues. With that contract, he became the first professional African American football player. Follis played on the team with Branch Rickey, the Ohio Wesleyan University student and future Brooklyn Dodger owner who would sign Jackie Robinson to integrate major league baseball in 1947.Like other players who integrated sports teams, Follis faced discrimination. Players on opposing teams targeted Follis with a rough play that resulted in injuries. At a game in Toledo in 1905, fans taunted him with racial slurs until the Toledo team captain addressed the crowd and asked them to stop. In Shelby, Follis joined his teammates at a local tavern after a game; the owner denied him entry. At the Thanksgiving Day game of the 1906 season, Follis suffered a career-ending injury.Follis turned to baseball, a sport he played for many years in the spring and summer. Having played for the Wooster College and in the Ohio Trolley League, Follis was an experienced baseball player, but could only play in segregated baseball leagues. He played for the Cuban Giants, a black baseball team, as a catcher.On April 15, 1910, at the age of 31, Follis died of pneumonia in Cleveland, after playing in a Cuban Giants game. He was buried in Wooster Cemetery in Wooster, Ohio. Research more about this great American Champion and share it with your babies. Make it a champion day!