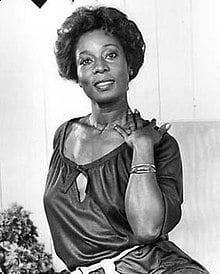 GM – FBF – Today’s American Champion was a Jamaican-born American actress best known for her roles in Cornbread, Earl and Me (1975), Convoy (1978), Coming to America (1988), Trapper John, M.D. (1980–1986), and the ABC TV miniseries Roots (1977). She also voiced the character of Sarabi, Mufasa’s wife and Simba’s mother, in the Disney animated feature film The Lion King (1994). A five-time Emmy Award nominee, she won the Primetime Emmy Award for Outstanding Supporting Actress – Drama Series for her role as Empress Josephine in Gabriel’s Fire in 1991.Today in our History – April 28, 1938 – Madge Dorita Sinclair (née Walters; April 28, 1938 – December 20, 1995) was born.Madge Sinclair was born Madge Dorita Walters on April 28, 1938 in Kingston, Jamaica, married young and had two sons. Madge worked as a teacher in Jamaica until she was 30. She left her two boys with their father and moved in 1968 to New York City to be an actress.She began modeling and later acted with the New York Shakespearean Festival and at Joseph Papp’s Public Theatre. In 1974, Madge made her film debut, playing Mrs. Scott in Conrack (1974). She was nominated for an Emmy Award for her performance as Bell Reynolds in the miniseries Roots (1977).In 1982, shortly after joining the cast of Trapper John, M.D. (1979), Sinclair was diagnosed with leukemia. She continued to work, outliving the doctors’ predictions by several years. On December 20, 1995, Madge Sinclair died at age 57 in Los Angeles, California, after a 13 year battle with leukemia.She appeared as the unnamed captain of the USS Saratoga in Star Trek IV: The Voyage Home (1986), marking the first appearance, in any Star Trek series or movie, of a female starship captain. She later guest starred on Star Trek: The Next Generation (1987) as Captain Silva La Forge, the mother of Geordi La Forge, played by LeVar Burton, one of her co-stars on the miniseries Roots (1977) — in which Burton played the younger version Kunta Kinte and Sinclair played Bell Reynolds, wife of the older version of Kunta Kinte, played by John Amos (who was Sinclair’s junior by 20 months).Co-starred with James Earl Jones five times, twice playing Queen to his King — in Coming to America (1988), then in The Lion King (1994).She was cast as a relative of characters played by Ben Vereen and LeVar Burton in two completely different revolutions. In Roots (1977), she played Bell Reynolds, Kunta Kinte’s wife and Chicken George’s grandmother. Kunta Kinte as a youth was played by LeVar Burton. Kunta Kinte as an adult married to Bell was played by John Amos. Chicken George was played by Ben Vereen. In Star Trek: The Next Generation: Interface (1993), Sinclair played Captain Silvia La Forge, mother of Geordi La Forge, played by Burton, and wife of Commander Edward M. La Forge, M.D., played by Vereen.Sinclair, having died in 1995 at Los Angeles’ Good Samaritan Hospital following a 13 year battle with leukemia, could not reprise her role as Queen Sarabi in The Lion King 2: Simba’s Pride (1998). The directors felt that replacing her voice could be seen as disrespectful and inappropriate. Sinclair was survived by her first husband, Dean Compton; her two sons; her mother; and her sister.She played LeVar Burton’s mother in four different productions: Almos’ a Man (1976), One in a Million: The Ron LeFlore Story (1978), Guyana Tragedy: The Story of Jim Jones (1980) and Star Trek: The Next Generation (1987). She also played his character’s wife in Roots (1977), though by that time the role of Kunta Kinte had been assumed by John Amos.Although she played Leslie Uggams’ mother in Roots (1977), she was only five years her senior in real life.She played Ben Vereen’s grandmother in Roots (1977) and his wife on Star Trek: The Next Generation (1987).Is one of only 32 actors and actresses to have starred in both the original Star Trek: The Original Series (1966) (up to and including Star Trek VI: The Undiscovered Country (1991)) and then in one of the spin-offs.She had two sons with her first husband Royston Sinclair: Wayne and Garry Sinclair. Research more about this great American Champion and share it with your babies. Make it a champion day!