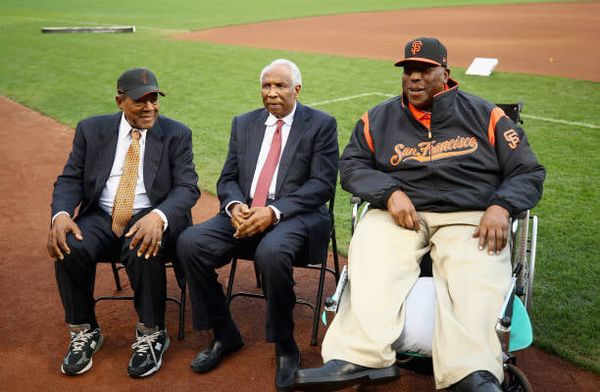 GM – FBF – The years as a young man growing up in Trenton, N.J. were the capitol city had much going on as the seat of power for the state but we had our share of athletes and entertainers. Dunn Field (The old Brunswick Circle) was the place to be to see this young great baseball star.Today’s American Champion is an American former professional baseball center fielder. He spent almost all of his 22-season Major League Baseball (MLB) career playing for the New York/San Francisco Giants (1951–52, 1954–72) before finishing his career with the New York Mets (1972–73). Regarded as one of the greatest baseball players of all time, he was elected to the Baseball Hall of Fame in 1979.Mays joined the Birmingham Black Barons in 1948, playing with them until he was signed by the Giants once he graduated high school in 1950. He won the Rookie of the Year Award, spent two years in the United States Army during the Korean War, and won the National League (NL) Most Valuable Player (MVP) Award after leading the NL in batting with a .345 batting average in 1954. His over-the-shoulder catch of a Vic Wertz fly ball in Game 1 of the 1954 World Series is one of the most famous baseball plays of all time. The Giants swept the Cleveland Indians, the lone World Series triumph of Mays’s career.Mays led the NL with 51 home runs in 1955. In 1956, he stole 40 bases, leading the NL for the first of four straight years. He won his first of 12 Gold Glove Awards in 1957, a record for outfielders. The Giants moved to San Francisco after the 1957 season, and Mays contended for the batting title until the final day of 1958, hitting a career-high .347. He batted over .300 for the next two seasons, leading the league in hits in 1960. After leading the NL with 129 runs scored in 1961, Mays led the NL in home runs in 1962 as the Giants won the NL pennant and faced the New York Yankees in the World Series, which the Giants lost in seven games.By 1963, Mays was making over $100,000 a year. In 1964, he was named the captain of the Giants by manager Alvin Dark, leading the NL with 47 home runs that year. He hit 52 the next year, leading the NL and winning his second MVP award. 1966 was the last of 10 seasons in which he had over 100 runs batted in. In 1969, he hit the 600th home run of his career, and he got his 3,000th hit in 1970. Traded to the Mets in 1972, Mays spent the rest of that season and 1973 with them before retiring. He served as a coach for the Mets until 1979 and later rejoined the Giants as a Special Assistant to the President and General Manager.Mays finished his career batting .302 with 660 home runs, the sixth-most of all time, and 1,903 RBI. He holds MLB records for most putouts (7,095) and most extra-inning home runs (22). Over his career, he was selected to 24 All-Star Games, tied for the second-most of all time. Mays was named to the Major League Baseball All-Century Team in 1999 and ranked second on The Sporting News’s “List of the 100 Greatest Baseball Players”, behind only Babe Ruth. He was presented the Presidential Medal of Freedom in 2015. “If somebody came up and hit .450, stole 100 bases and performed a miracle in the field every day, I’d still look you in the eye and say Willie was better,” manager Leo Durocher said.Today I our History – May 6, 1931 – Willie Howard Mays Jr. (born May 6, 1931), nicknamed “The Say Hey Kid”Both Mays’s father and his grandfather had been baseball players. Willie Mays, who batted and fielded right-handed, played semiprofessional baseball when he was 16 years old and joined the Birmingham Black Barons of the Negro National League in 1948, playing only on Sunday during the school year.The National League New York Giants paid the Barons for his contract when he graduated from Fairfield Industrial High School in 1950. After two seasons in the minor leagues, Mays went to the Giants in 1951 and was named Rookie of the Year at the end of that season—one legendary in baseball. The Giants were far behind the Brooklyn Dodgers in the pennant race. With the great play of Mays and others, the Giants tied the Dodgers in the standings on the last day of the season, and a three-game play-off for the National League championship was won with a home run, known as “the shot heard ’round the world,” hit by the Giants’ Bobby Thomson.Mays became known first for his spectacular leaping and diving catches before he established himself as a hitter. He served in the army (1952–54), and upon his return to baseball in the 1954 season, when the Giants won the National League pennant and the World Series, Mays led the league in hitting (.345) and had 41 home runs. In 1966 his two-year contract with the Giants (who had moved to San Francisco in 1958) gave him the highest salary of any baseball player of that time. He was traded to the New York Mets midseason in 1972 and retired after the 1973 season. Late in his career he played in the infield, mainly at first base. His career home run total was 660 and his batting average .302. Mays had 3,283 hits during his career, which made him one of the small group of players with more than 3,000 career hits. He led the league in home runs in 1955, 1962, and 1964–65, won 12 consecutive Gold Gloves (1957–68), and was named an All-Star in 20 of his 22 seasons.After retiring as a player, Mays was a part-time coach and did public relations work for the Mets. In 1979 Mays took a public relations job with a company that was involved in gambling concerns, with the result that he was banned from baseball-related activities just three months after being elected to the Baseball Hall of Fame in Cooperstown, New York. In 1985 the ban was lifted, and in 1986 Mays became a full-time special assistant to the Giants. His autobiography, Say Hey (1988), was written with Lou Sahadi. In 2015 Mays was awarded the Presidential Medal of Freedom. Research more about this great American Champion and share it with your babies. Make it a champion day!