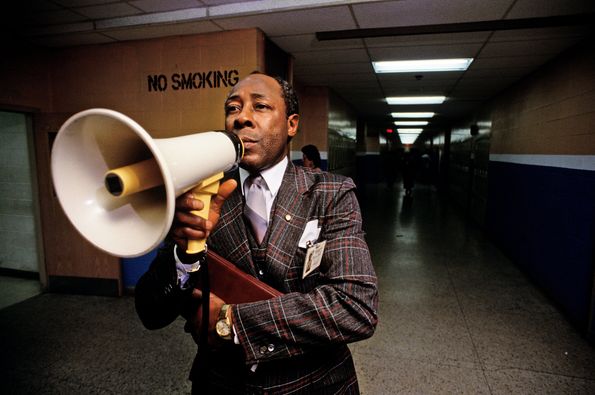 GM – FBF – Today’s American Champion was the principal of Eastside High School in Paterson, New Jersey. He is also the subject of the 1989 film Lean on Me, starring Morgan Freeman. He gained public attention in the 1980s for his unconventional and controversial disciplinary measures as the principal of Eastside High.Today in our History – May 8, 1938 – Joe Louis Clark was born.Clark was seen as an educator who was not afraid to get tough on difficult students, one who would often carry a bullhorn or a baseball bat at school. During his time as principal, Clark expelled over 300 students who were frequently tardy or absent from school, sold or used drugs in school, or caused trouble in school.Clark’s practices did result in slightly higher average test scores for Eastside High during the 1980s. After his tenure as principal of Eastside High, Clark later served as director of the Essex County Detention House in Newark, New Jersey, a juvenile detention facility. Time magazine’s cover article notes that Clark’s style as principal was primarily disciplinarian in nature, focused on encouraging school pride and good behavior, although Clark was also portrayed as a former social activist in the film Lean on Me. “Clark’s use of force may rid the school of unwanted students,” commented Boston principal Thomas P. O’Neill Jr., “but he also may be losing kids who might succeed.” George McKenna, former principal of Washington Preparatory High School in Los Angeles, often cited as a contemporary of Joe Clark as a school reformer with a similarly outgoing approach, was also critical. “Our role is to rescue and to be responsible,” McKenna told Time. “If the students were not poor black children, Joe Clark would not be tolerated.”Other educators defended and praised Clark. “You cannot use a democratic and collaborative style when crisis is rampant and disorder reigns,” said Kenneth Tewel, a former principal. “You need an autocrat to bring things under control.” Some critics focused on the fact that while Clark had reestablished cleanliness and order, education scores had not substantially improved, which resulted in Eastside High being taken over by the state one year after Clark’s departure in 1991. Separate criticism focused on the social impact of expelling delinquent students to improve test scores, claiming that “tossing out the troublesome low achievers” simply moved the problems from the school onto the street. Clark defended the practice, saying teachers should not have to waste their time on students who do not want to learn.However, Time noted that the national dropout rate for such students remained high across the country, with few alternatives available, and that each inner city school that had been able to reverse the trend had done so through “a bold, enduring principal” such as Clark who was “able to maintain or restore order without abandoning the students who are in trouble.” Clark grew up in Newark, New Jersey and attended Central High School. Clark was also the father of Olympic track athletes Joetta Clark Diggs and Hazel Clark, and the father-in-law of Olympic track athlete Jearl Miles Clark. His son, JJ Clark, was their coach.He resided in Newberry, Florida during his retirement. Clark died following a long illness on December 29, 2020 at the age of 82. Research more about this great American Champion and share it with your babies. Make it a champion day!