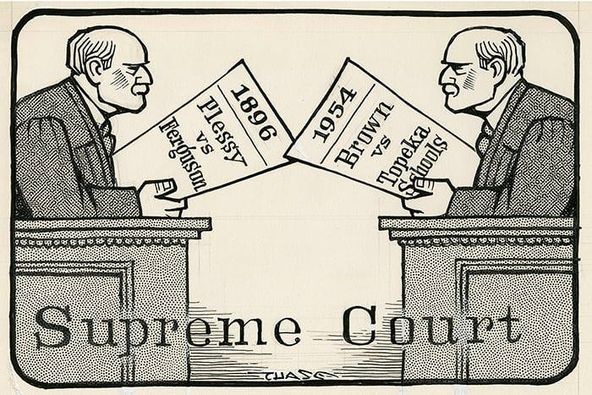 GM – FBF – Today’s American Champion event was Plessy v. Ferguson (1896), the Supreme Court considered the constitutionality of a Louisiana law passed in 1890 “providing for separate railway carriages for the white and colored races.” The law, which required that all passenger railways provide separate cars for blacks and whites, stipulated that the cars be equal in facilities, banned whites from sitting in black cars and blacks in white cars (with exception to “nurses attending children of the other race”), and penalized passengers or railway employees for violating its terms.Today in our History May 18, 1896 – The U.S, Supreme Court rules against Plessy.Homer Plessy, the plaintiff in the case, was seven-eighths white and one-eighth black, and had the appearance of a white man. On June 7, 1892, he purchased a first-class ticket for a trip between New Orleans and Covington, La., and took possession of a vacant seat in a white-only car. Duly arrested and imprisoned, Plessy was brought to trial in a New Orleans court and convicted of violating the 1890 law. He then filed a petition against the judge in that trial, Hon. John H. Ferguson, at the Louisiana Supreme Court, arguing that the segregation law violated the Equal Protection Clause of the Fourteenth Amendment, which forbids states from denying “to any person within their jurisdiction the equal protection of the laws,” as well as the Thirteenth Amendment, which banned slavery.The Court ruled that, while the object of the Fourteenth Amendment was to create “absolute equality of the two races before the law,” such equality extended only so far as political and civil rights (e.g., voting and serving on juries), not “social rights” (e.g., sitting in a railway car one chooses). As Justice Henry Brown’s opinion put it, “if one race be inferior to the other socially, the constitution of the United States cannot put them upon the same plane.” Furthermore, the Court held that the Thirteenth Amendment applied only to the imposition of slavery itself.The Court expressly rejected Plessy’s arguments that the law stigmatized blacks “with a badge of inferiority,” pointing out that both blacks and whites were given equal facilities under the law and were equally punished for violating the law. “We consider the underlying fallacy of [Plessy’s] argument” contended the Court, “to consist in the assumption that the enforced separation of the two races stamps the colored race with a badge of inferiority. If this be so, it is not by reason of anything found in the act, but solely because the colored race chooses to put that construction upon it.”Justice John Marshall Harlan entered a powerful — and lone — dissent, noting that “in view of the Constitution, in the eye of the law, there is in this country no superior, dominant, ruling class of citizens. There is no caste here. Our Constitution is color-blind, and neither knows nor tolerates classes among citizens.”Until the mid-twentieth century, Plessy v. Ferguson gave a “constitutional nod” to racial segregation in public places, foreclosing legal challenges against increasingly-segregated institutions throughout the South. The railcars in Plessy notwithstanding, the black facilities in these institutions were decidedly inferior to white ones, creating a kind of racial caste society. However, in the landmark decision Brown v. Board of Education (1954), the “separate but equal” doctrine was abruptly overturned when a unanimous Supreme Court ruled that segregating children by race in public schools was “inherently unequal” and violated the Fourteenth Amendment. Brown provided a major catalyst for the civil rights movement (1955-68), which won social, not just political and civil, racial equality before the law. After four decades, Justice Harlan’s dissent became the law of the land. Following Brown, the Supreme Court has consistently ruled racial segregation in public settings to be unconstitutional. Research more about this great American Court decision and share it with your babies. Make it a champion day!