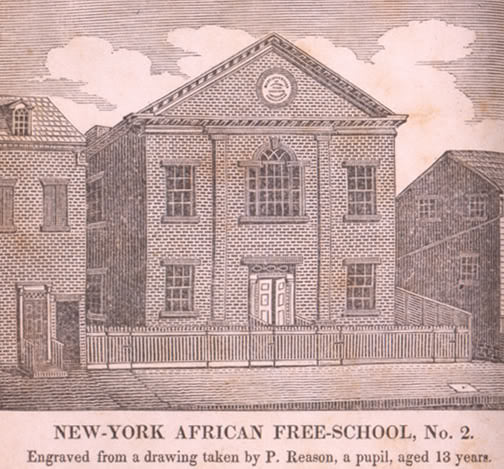 GM – FBF – Today’s American Champion was The most effective work of the Society [for the Propogation] of the Gospel] among Negroes of the Northern colonies was accomplished in New York. In that colony, the instruction of the Negro and Indian slaves to prepare them for conversion, baptism, and communion was a primary charge of repeated to every missionary and schoolmaster of the Society. Today in our History – May 20, 1704 – Elias Neau, founded school for slaves in New York, 1704In addition to the general efforts put forth in the colonies, there was in New York a special provision for the employment of sixteen clergymen and thirteen lay teachers mainly for the evangelization of the slaves and the free Indians. For the Negro slaves a catechizing school was opened in New York City in 1704 under the charge of Elias Neau. This benevolent man, after several years’ imprisonment because of his Protestant faith, had come to New York to try his fortunes as a trader. As early as 1703 he called the attention of the Society to the great number, of slaves in New York “who were without God in the world, and of whose souls there was no manner of care taken” and proposed the appointment of a catechist to undertake their instruction. He himself finally being prevailed upon to accept this position, obtained a license from the Governor, resigned his position as elder in the French church [Église du Saint Esprit] and conformed to the Established Church of England, “not upon any worldly account but through a principle of conscience and hearty approbation of the English liturgy.” He was later licensed by the Bishop of London. Neau’s task was not an easy one. At first he went from house to house, but afterwards arranged for some of the slaves to attend him. He succeeded, however, in obtaining gratifying results. He was commended to the Society by Rev. Mr. Vesey in 1706 as a “constant communicant of our church, and a most zealous and prudent servant of Christ, in proselyting the miserable Negroes and Indians among them to the Christian Religion, whereby he does great service to God and his church.” Further confidence in him was attested by an act of the Society in preparing at his request “a Bill to be offered to Parliament for the more effectual Conversion of the Negro and other Servants in the Plantations, to compell Owners of Slaves to cause children to be baptized within 3 months after their birth and to permit them when come to years of discretion to be instructed in the Christian Religion on our Lord’s day by the Missionaries under whose ministry they live.” Neau’s school suffered greatly in 1712 because of the prejudice engendered by the declaration that instruction was the main cause of the Negro riot in that city. For some days Neau dared not show himself, so bitter was the feeling of the masters. Upon being assured, however, that only one Negro connected with the school had participated in the affair and that the most criminal belonged to the masters who were openly opposed to educating them, the institution was permitted to continue its endeavors, and the Governor extended to it his protection and recommended that masters have their slaves instructed. Yet Neau had still to complain thereafter of the struggle and opposition of the generality of the inhabitants, who were strongly prejudiced with a horrid motive thinking that Christian knowledge “would be a means to make the slave more cunning and apter to wickedness.” Not so long thereafter, however, the support of the best people and officials of the community made his task easier. Neau could say in 1714 that “if the slaves and domestics in New York were not instructed it was not his fault.” The Governor, the Council, Mayor, the Recorder and the Chief Justice informed the Society that Neau had performed his work “to the great advancement of religion in general and the particular benefit of the free Indians, Negro slaves, and other Heathens in those parts, with indefatigable zeal and application.” Neau died in 1722. His work was carried on by Mr. Huddlestone, Rev. Mr. Whitmore, Rev. Mr. Colgan, Rev. R. Charlton, and Rev. S. Auchmut. Resreach more about this great American Champion and share it with your babies. Make it a champion day!