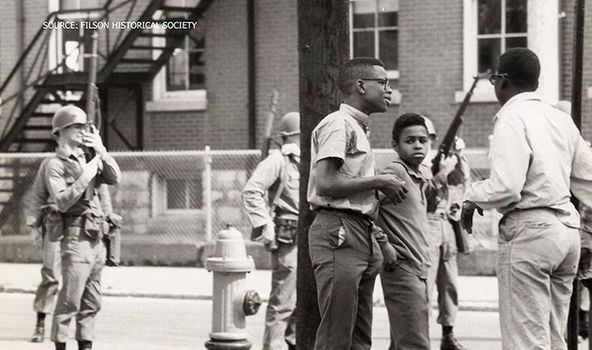 GM – FBF – Today’s American Champion moment was at the beginning of the summer in 1968; keep in mind Dr. Martin Luther King Jr. was assassinated a month before and tensions in urban centers were still high and at the tipping point in many.Trenton, New Jersey my hometown was hit hard from that April throw-out the summer. In a town where the “Greatest” Muhammad Ali was from it exploded but they were sparked in the aftermath of a police brutality case as well as racial tensions. As I continue my focus on “Red Summer” -1919 remembrance. Never Again!Remember – “You know, as a child when I was growing up, that was the epicenter of where I lived,” – Louisville Metro Council President DavidToday in our History – May 27, 1968 – 51 Years Later: Remembering Louisville’s 1968 riots.By 11:00 AM (CST) a rally was taken place at 28th and Greenwood, in the Parkland neighborhood to protest an arrest that had happened a few weeks’ prior on May 8, 1968.The intersection and Parkland in general, had recently become an important location for Louisville’s black community, as the local NAACP branch had moved its office there.The men arrested were Charles Thomas and a real estate broker by the name of Manfred G. Reid. Reid questioned officers about Thomas’s arrest which caused a crowd of about 200 African Americans to gather and begin to yell at the officers as the two were taken into custody.Three weeks later, a rally which consisted of close to 350-400 people was devised as a plan to discuss the arrest of Thomas and Reid. At the rally, there were several speakers who gave their opinions on the arrest of the two gentleman.The crowd was protesting against the possible reinstatement of a white officer who had been suspended for beating a black man some weeks earlier.Several community leaders arrived and told the crowd that no decision had been reached, and alluded to disturbances in the future if the officer was reinstated. By 8:30, the crowd began to disperse.However, rumors (which turned out to be untrue) were spread that Student Nonviolent Coordinating Committee speaker Stokely Carmichael’s plane to Louisville was being intentionally delayed by whites. After bottles were thrown by the crowd, the crowd became unruly and police were called.However, the small and unprepared police response simply upset the crowd more, which continued to grow. The police, including a captain who was hit in the face by a bottle, retreated, leaving behind a patrol car, which was turned over and burned.By midnight, rioters had looted stores as far east as Fourth Street, overturned cars and started fires.Within an hour, Mayor Kenneth A. Schmied requested 700 Kentucky National Guard troops and established a citywide curfew. Violence and vandalism continued to rage the next day, but had subdued somewhat by May 29.Business owners began to return, although troops remained until June 4. Police made 472 arrests related to the riots. Two black teenage rioters had died, and $200,000 in damage had been done.The disturbances had a longer-lasting effect. Most white business owners quickly pulled out or were forced, by the threat of racial violence, out of Parkland and surrounding areas.Most white residents also left the West End, which had been almost entirely white north of Broadway, from subdivision until the 1960s. The riot would have effects that shaped the image which whites would hold of Louisville’s West End, that it was predominantly black.In the 51 years since the riots of 1968, much has changed in Louisville’s West End. Many businesses have long left the area near 28th and Greenwood. Research more about race riots in America and share with your babies. Make it a champion day!