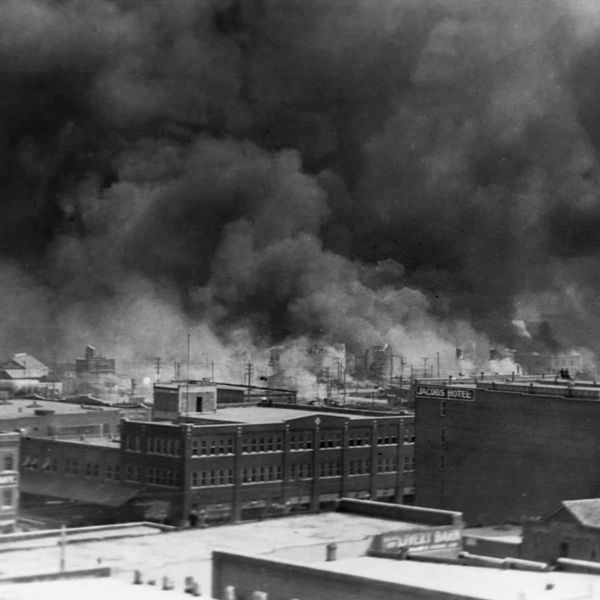 GM – FBF – Today’s American Champion event was The Tulsa race massacre (known alternatively as the Tulsa race riot, the Greenwood Massacre, the Black Wall Street Massacre, the Tulsa pogrom, or the Tulsa Massacre) took place on May 31 and June 1, 1921, when mobs of white residents, many of them deputized and given weapons by city officials, attacked black residents and businesses of the Greenwood District in Tulsa, Oklahoma. It has been called “the single worst incident of racial violence in American history.” The attack, carried out on the ground and from private aircraft, destroyed more than 35 square blocks of the district—at that time the wealthiest black community in the United States, known as “Black Wall Street.”More than 800 people were admitted to hospitals, and as many as 6,000 black residents were interned in large facilities, many of them for several days. The Oklahoma Bureau of Vital Statistics officially recorded 36 dead. A 2001 state commission examination of events was able to confirm 39 dead, 26 black and 13 white, based on contemporary autopsy reports, death certificates and other records. The commission gave several estimates ranging from 75 to 300 dead.The massacre began during the Memorial Day weekend after 19-year-old Dick Rowland, a black shoeshiner, was accused of assaulting Sarah Page, the 17-year-old white elevator operator of the nearby Drexel Building. He was taken into custody. After the arrest, rumors spread through the city that Rowland was to be lynched. Upon hearing reports that a mob of hundreds of white men had gathered around the jail where Rowland was being kept, a group of 75 black men, some of whom were armed, arrived at the jail to ensure that Rowland would not be lynched. The sheriff persuaded the group to leave the jail, assuring them that he had the situation under control. As the group was leaving the premises, complying with the sheriff’s request, a member of the mob of white men allegedly attempted to disarm one of the black men. A shot was fired, and then according to the reports of the sheriff, “all hell broke loose.” At the end of the firefight, 12 people were killed: 10 white and 2 black. As news of these deaths spread throughout the city, mob violence exploded. White rioters rampaged through the black neighborhood that night and morning killing men and burning and looting stores and homes. Around noon on June 1, the Oklahoma National Guard imposed martial law, effectively ending the massacre.About 10,000 black people were left homeless, and property damage amounted to more than $1.5 million in real estate and $750,000 in personal property (equivalent to $32.25 million in 2019). Many survivors left Tulsa, while black and white residents who stayed in the city kept silent about the terror, violence, and resulting losses for decades. The massacre was largely omitted from local, state, and national histories.In 1996, 75 years after the massacre, a bipartisan group in the state legislature authorized formation of the Oklahoma Commission to Study the Tulsa Race Riot of 1921. The commission’s final report, published in 2001, states that the city had conspired with the mob of white citizens against black citizens; it recommended a program of reparations to survivors and their descendants. The state passed legislation to establish scholarships for descendants of survivors, encourage economic development of Greenwood, and develop a memorial park to the massacre victims in Tulsa. The park was dedicated in 2010. In 2020, the massacre became a part of the Oklahoma school curriculum. The last male survivor of the Tulsa race massacre, R&B and jazz saxophonist Hal Singer, died on August 18, 2020, at age 100.Today in our History May 31, 1921 – The Tulsa, OK race riots.On May 30, 1921, Dick Rowland, a young African American shoe shiner, was accused of assaulting a white elevator operator named Sarah Page in the elevator of a building in downtown Tulsa. The next day, the Tulsa Tribune printed a story saying that Rowland had tried to rape Page, with an accompanying editorial stating that a lynching was planned for that night. That evening mobs of both African Americans and whites descended on the courthouse where Rowland was being held. When a confrontation between an armed African American man, there to protect Rowland, and a white protestor resulted in the death of the latter, the white mob was incensed, and the Tulsa massacre was thus ignited.Over the next two days, mobs of white people looted and set fire to African American businesses and homes throughout the city. Many of the mob members were recently returned World War I veterans trained in the use of firearms and are said to have shot African Americans on sight. Some survivors even claimed that people in airplanes dropped incendiary bombs.When the massacre ended on June 1, the official death toll was recorded at 10 whites and 26 African Americans, though many experts now believe at least 300 people were killed. Shortly after the massacre there was a brief official inquiry, but documents related to the massacre disappeared soon afterward. The event never received widespread attention and was long noticeably absent from the history books used to teach Oklahoma schoolchildren.In 1997 a Tulsa Race Riot Commission was formed by the state of Oklahoma to investigate the massacre and formally document the incident. Members of the commission gathered accounts of survivors who were still alive, documents from individuals who witnessed the massacre but had since died, and other historical evidence. Scholars used the accounts of witnesses and ground-piercing radar to locate a potential mass grave just outside Tulsa’s Oaklawn Cemetery, suggesting the death toll may be much higher than the original records indicate. In its preliminary recommendations, the commission suggested that the state of Oklahoma pay $33 million in restitution, some of it to the 121 surviving victims who had been located. However, no legislative action was ever taken on the recommendation, and the commission had no power to force legislation. In April 2002 a private religious charity, the Tulsa Metropolitan Ministry, paid a total of $28,000 to the survivors, a little more than $200 each, using funds raised from private donations. Research more about this great American Tragedy and share it with your babies. Make it a champion day!