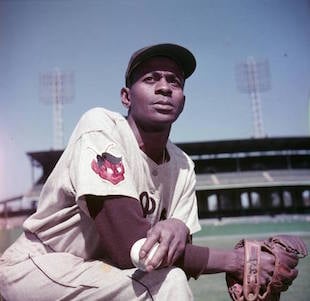 GM – FBF – Today’s American Champion was an American professional baseball pitcher who played in Negro league baseball and Major League Baseball (MLB). His career spanned five decades and culminated with his induction into the National Baseball Hall of Fame.A right-handed pitcher, he first played for the semi-professional Mobile Tigers from 1924 to 1926. He began his professional baseball career in 1926 with the Chattanooga Black Lookouts of the Negro Southern League and became one of the most famous and successful players from the Negro leagues. On town tours across the United States, he would sometimes have his infielders sit down behind him and then routinely strike out the side.At age 42 in 1948, he made his major league debut for the Cleveland Indians. he was the first black pitcher to play in the American League and was the seventh black player to play in Major League Baseball. Also in 1948, he became the first player who had played in the Negro leagues to pitch in the World Series; the Indians won the Series that year. He played with the St. Louis Browns from 1951 to 1953, representing the team in the All-Star Game in 1952 and 1953. He played his last professional game on June 21, 1966, for the Peninsula Grays of the Carolina League. In 1971, he became the first electee of the Negro League Committee to be inducted into the Baseball Hall of Fame. Today in our History – June 8, 1982 – Leroy Robert “Satchel” Paige (July 7, 1906 – June 8, 1982) dies.Leroy Robert Paige (better known as Satchel Paige) was an American baseball player who played for the Negro Leagues as well as MLB (Major League Baseball) teams. He was born on July 7, 1906 in Alabama, the 7th of 12 children in his family. His actual date of birth has been a point of contention but was officially determined from his birth certificate to be so. As a child, Paige used to work as a porter at the train station, earning a dime for carrying a bag. According to Paige, he used to tie a pole and rope around his shoulders to allow him to carry more luggage at once, due to which other kids would call him “satchel tree” thus earning him his nickname. According to another version of events, however, Paige got the nickname when he was caught trying to steal a bag.At the age of 13, Paige was caught trying to shoplift, which had been the third such incident to date. He was then sent to a state reform school, Industrial School for Negro Children in Mount Meigs, Alabama, where he stayed till the age of 18. During his 5 years there, his coach Edward Byrd taught him to pitch and polished his skills until he was released in December 1923. As African Americans were barred from the Major Leagues back then, Paige began his career with the Negro Southern League in 1926. He was drafted into the Chattanooga White Sox on a contract of $250 per month, where he had an impressive record. He was then traded to the Birmingham Black Barons of the major Negro National League (NNL). He played for several other leagues, both within the U.S. as well as in Cuba, the Dominican Republic, Puerto Rico and Mexico.Satchel Paige also played a lot of exhibition matches and barnstorming tours for extra money, sometimes against stars from the major leagues such as Joe DiMaggio and Dizzy Dean, who commented on his exceptional capabilities as a pitcher. Unfortunately, however, there are very few official statistics about his career, especially because he switched teams frequently and travelled quite often. According to some of Paige’s own statistics, as well as those compiled by others, he has pitched in more than 2,500 games, won more than 2,000 and played for over 250 teams which vouch for his exceptional career.In 1948, Paige was inducted into Major League Baseball. Jackie Robinson had been drafted by the Minor Leagues earlier but this was still a huge accomplishment, as Paige was 42 years old at the time and the first black player in the Major Leagues. He joined the Cleveland Indians, and his first season, helped them to win the World Series. He stayed with the team for one more season before moving to the St. Louis Browns, with whom he spent three seasons. His MLB record is just as impressive as his Negro League record, and Paige continued to play well into his fifties, becoming the oldest player in Major League history.Satchel Paige was a true baseball legend and his life has been documented in his autobiographies. He died of a heart attack at the age of 75 on June 8, 1982. He is widely claimed to be one of the best pitchers in the history of the game by numerous sports writers, critics and fans alike and several books, movies and documentaries have been made about his life and accomplishments. Research more about this great American Champion and share it with your babies. Make it a champion day!