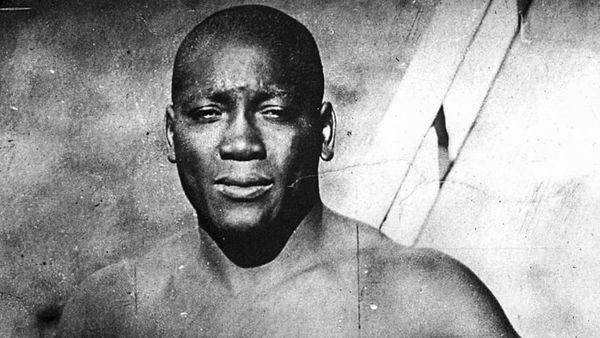 GM – FBF – Today’s American Champion was an American boxer who, at the height of the Jim Crow era, became the first African American world heavyweight boxing champion (1908–1915). Widely regarded as one of the most influential boxers of all time, one of the period’s most dominant champions, and as a boxing legend, his 1910 fight against James J. Jeffries was dubbed the “fight of the century”. According to filmmaker Ken Burns, “for more than thirteen years, he was the most famous and the most notorious African-American on Earth”. Transcending boxing, he became part of the culture and history of racism in the United States. In 1912, he opened a successful and luxurious “black and tan” (desegregated) restaurant and nightclub, which in part was run by his wife, a white woman. Major newspapers of the time soon claimed that he was attacked by the government only after he became famous as a black man married to a white woman, and was linked to other white women. He was arrested on charges of violating the Mann Act—forbidding one to transport a woman across state lines for “immoral purposes”—a racially motivated charge that embroiled him in controversy for his relationships, including marriages, with white women. Sentenced to a year in prison, he fled the country and fought boxing matches abroad for seven years until 1920 when he served his sentence at the federal penitentiary at Leavenworth.He continued taking paying fights for many years, and operated several other businesses, including lucrative endorsement deals. He died in a car crash on June 10, 1946, at the age of 68. He is buried at Graceland Cemetery in Chicago. On May 24, 2018, he was formally pardoned by U.S. President Donald Trump.Today in our History – June 10, 1946 – Jack Johnson dies.Johnson fought professionally from 1897 to 1928 and engaged in exhibition matches as late as 1945. He won the title by knocking out champion Tommy Burns in Sydney on December 26, 1908, and lost it on a knockout by Jess Willard in 26 rounds in Havana on April 5, 1915. Until his fight with Burns, racial discrimination had limited Johnson’s opportunities and purses. When he became champion, a hue and cry for a “Great White Hope” produced numerous opponents.At the height of his career, the outspoken Johnson was excoriated by the press for his flashy lifestyle and for having twice married white women. He further offended white supremacists in 1910 by knocking out former champion James J. Jeffries, who had been induced to come out of retirement as a “Great White Hope.” The Johnson-Jeffries bout, which was billed as the “Fight of the Century,” led to nationwide celebrations by African Americans that were occasionally met by violence from whites, resulting in more than 20 deaths across the country.In 1913 Johnson was convicted of violating the Mann Act by transporting a white woman—Lucille Cameron, his wife-to-be—across state lines for “immoral purposes.” He was sentenced to a year in prison and was released on bond, pending appeal. Disguised as a member of a black baseball team, he fled to Canada; he then made his way to Europe and was a fugitive for seven years.He defended the championship three times in Paris before agreeing to fight Willard in Cuba. Some observers thought that Johnson, mistakenly believing that the charge against him would be dropped if he yielded the championship to a white man, deliberately lost to Willard. From 1897 to 1928 Johnson had 114 bouts, winning 80, 45 by knockouts.In 1920 Johnson surrendered to U.S. marshals; he then served his sentence, fighting in several bouts within the federal prison at Leavenworth, Kansas. After his release he fought occasionally and performed in vaudeville and carnival acts, appearing finally with a trained flea act. He wrote two books of memoirs, Mes Combats (in French, 1914) and Jack Johnson in the Ring and Out (1927; reprinted 1975). He died in an automobile accident.In the years after Johnson’s death, his reputation was gradually rehabilitated. His criminal record came to be regarded as more a product of racially motivated acts than a reflection of actual wrongdoing, and members of the U.S. Congress—as well as others, notably actor Sylvester Stallone—attempted to secure for Johnson a posthumous presidential pardon, which is exceedingly rare. After hearing about Johnson from Stallone, Pres. Donald Trump officially pardoned the boxer in 2018.Johnson’s life story was lightly fictionalized in the hit play The Great White Hope (1967; filmed 1970), and he was the subject of Ken Burns’s documentary film Unforgivable Blackness (2004). Johnson was a member of the inaugural class of inductees into the International Boxing Hall of Fame in 1990. Research more about this great American Champion and share it with your babies. Make it a champion day!