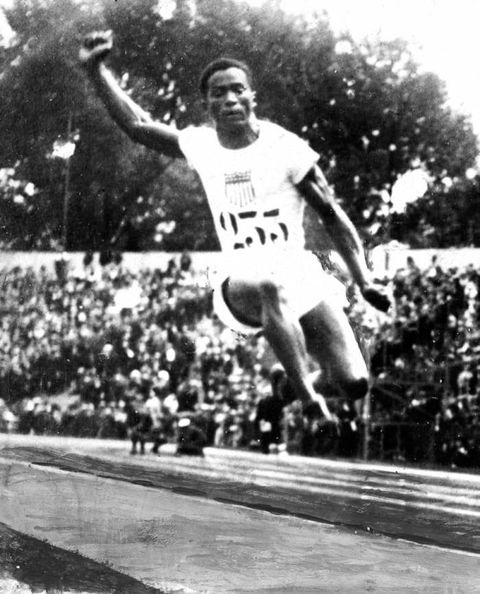 GM – FBF – Today’s American Champion was a track and field athlete who was the first African American to win an Olympic gold medal in an individual event: the running long jump at the 1924 Paris Summer games.Today in our History – June 23, 1924 – William DeHart Hubbard (November 25, 1903 – June 23, 1976) was born.William DeHart Hubbard was the first African American to win a gold medal at the Olympics as an individual, placing first in the running long jump. Hubbard was born on November 25, 1903, in Cincinnati, Ohio and attended Walnut Hills High School in that city. Hubbard’s achievements on the track and in the classroom caught the attention of a University of Michigan alumnus, Lon Barringer, who saw his times posted in a Cincinnati newspaper. With the encouragement and recruiting of Barringer and other alums, Hubbard decided that he would attend the University of Michigan and run track.As an African American, attending the University of Michigan and running track there was an achievement enough of its own. In Hubbard’s senior class, only eight out of the 1,456 graduating students were African American. He excelled in academics, graduating with honors in 1927, and on the track, setting records and winning numerous championships for the Wolverines. As a freshman, Hubbard was not allowed to run Varsity track. His sophomore year was mediocre but he began to break records in his junior year. He helped win Big Ten championships in the 100-meter dash, running a time of 9.8 seconds, and the long jump, jumping 24 feet 10 and ¾ inches. With performances like that, DeHart won a spot on the 1924 Olympic team, beating Edward Gourdin (then the world record holder) at trials at Harvard University to seal his spot to represent the United States at the Olympics in Paris, France.Hubbard struggled initially at the Olympics. On his sixth and final jump match he bruised his heel and committed a foul for stepping too far over the line. However, coming into his last jump at full speed, he leaped 24 feet 5 and ½ inches, and became the first African American to win a gold medal as an individual in the Olympics.Going into his senior year at Michigan Hubbard competed in sprints, hurdles, and the long jump, helping the Wolverines win Big Ten titles in indoor and outdoor meets. He also tied the world record in the 100-meter dash at 9.6 seconds, and beat the world record in the long jump, jumping 25 feet, 10 and 3/8 inches.After graduating from the University of Michigan, Hubbard worked at a number of different jobs. He was a supervisor at the Department of Colored Work for the Cincinnati Public Recreation Commission, and was a manager of a housing project in Cincinnati, before moving to Cleveland, Ohio. He retired in Cleveland after working for the Federal Public Housing Authority. William DeHart Hubbard died on June 23, 1976, in Cleveland, Ohio. He subsequently set a long jump world record of 25 feet 10 3⁄4 inches (7.89 m) at Chicago in June 1925 and equaled the world record of 9.6 seconds for the 100-yard dash at Cincinnati, Ohio a year later.He attended and graduated from Walnut Hills High School in Cincinnati, graduated with honors from the University of Michigan in 1927 where he was a three-time National Collegiate Athletic Association champion (1923 & 1925 outdoor long jump, 1925 100-yard dash) and seven-time Big Ten Conference champion in track and field (1923 & 1925 indoor 50-yard dash, 1923, 1924, & 1925 outdoor long jump, 1924 & 1925 outdoor 100-yard dash). His 1925 outdoor long jump of 25 feet 10 1⁄2 inches (7.89 m) stood as the Michigan Wolverines team record until 1980, and it still stands second. His 1925 jump of 25 feet 3 1⁄2 inches (7.71 m) stood as a Big Ten Championships record until Jesse Owens broke it on with what is now the current record of 26 feet 8 1⁄4 inches (8.13 m) in 1935.Upon college graduation, he accepted a position as the supervisor of the Department of Colored Work for the Cincinnati Public Recreation Commission. He remained in this position until 1941. He then accepted a job as the manager of Valley Homes, a public housing project in Cincinnati. In 1942 he moved to Cleveland, Ohio where he served as a race relations adviser for the Federal Housing Authority. He retired in 1969. He died in Cleveland in 1976. Hubbard was posthumously inducted into the University of Michigan Hall of Honor in 1979; he was part of the second class inducted into the Hall of Honor. He was a member of the Omega Psi Phi fraternity. In addition to participating in track and field events, Hubbard also was an avid bowler. He served as the president of the National Bowling Association during the 1950s. He also founded the Cincinnati Tigers, a professional baseball team, which played in the Negro American League. In 1957, Hubbard was elected to the National Track Hall of Fame. In 2010, the Brothers of Omega Psi Phi, Incorporated, PHI Chapter established a scholarship fund honoring William DeHart Hubbard; the fund is endowed through the University of Michigan and donations can be forwarded to the University of Michigan, The William DeHart Hubbard Scholarship Fund. Research more about this great American Champion and share it with your babies. Make it a champion day!