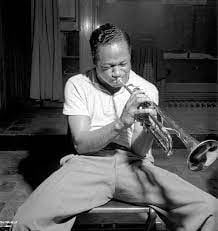 GM – FBF – Today’s American Champion was an American jazz trumpeter. He died at the age of 25 in a car accident, leaving behind four years’ worth of recordings. His compositions “Sandu”, “Joy Spring”, and “Daahoud” have become jazz standards. Brown won the Down Beat magazine Critics’ Poll for New Star of the Year in 1954; he was inducted into the DownBeat Hall of Fame in 1972.Today in our History – June 26, 1956 – Clifford Benjamin Brown (October 30, 1930 – June 26, 1956) dies.Brown was born into a musical family in Wilmington, Delaware. His father organized his four sons, including Clifford, into a vocal quartet. Around age ten, Brown started playing trumpet at school after becoming fascinated with the shiny trumpet his father owned. At age thirteen, his father bought him a trumpet and provided him with private lessons. In high school, Brown received lessons from Robert Boysie Lowery and played in “a jazz group that Lowery organized”. He making trips to Philadelphia.Brown briefly attended Delaware State University as a math major before he switched to Maryland State College. His trips to Philadelphia grew in frequency after he graduated from high school and entered Delaware State University. He played in the fourteen-piece, jazz-oriented Maryland State Band. In June 1950, he was injured in a car accident after a performance. While in the hospital, he was visited by Dizzy Gillespie, who encouraged him to pursue a career in music. Injuries restricted him to playing the piano.Brown was influenced and encouraged by Fats Navarro. His first recordings were with R&B bandleader [Chris Powell. He worked with Art Blakey, Tadd Dameron, Lionel Hampton, J. J. Johnson, and before forming a band with Max Roach. Brown’s trumpet was partnered with Harold Land’s tenor saxophone. After Land left in 1955, Sonny Rollins joined and remained a member of the group for the rest of its existence.Brown stayed away from drugs and was not fond of alcohol. Rollins, who was recovering from heroin addiction, said that “Clifford was a profound influence on my personal life. He showed me that it was possible to live a good, clean life and still be a good jazz musician.”In June 1956, Brown and Richie Powell embarked on a drive to Chicago for their next appearance. Powell’s wife Nancy was at the wheel so that Clifford and Richie could sleep. While driving at night in the rain on the Pennsylvania Turnpike, west of Bedford, Pennsylvania|Bedford, she is presumed to have lost control of the car, which went off the road, killing all three in the resulting crash. Brown is buried in Mt. Zion Cemetery, in Wilmington, Delaware.On June 26, 1954, in Los Angeles, Brown married Emma LaRue Anderson (1933–2005), who he called “Joy Spring”. The two had been introduced by Max Roach. They actually celebrated their marriage vows three times, partly because their families were on opposite coasts and partly because of their differing religions – Brown was Methodist and Anderson was Catholic. They were first married in a private ceremony June 26, 1954, in Los Angeles (on Anderson’s 21st birthday). They again celebrated their marriage in a religious setting on July 16, 1954 – the certificate being registered in Los Angeles County – and a reception was held at the Tiffany Club where the Art Pepper/Jack Montrose Quintet had been replaced a few days earlier by the Red Norvo Trio with Tal Farlow and Red Mitchell. Anderson’s parish priest followed them to Boston, where on August 1, 1954 they performed their marriage ceremony at Saint Richards Church in the Roxbury, Boston|Roxbury neighborhood.His nephew, drummer Rayford Griffin (né Rayford Galen Griffin; born 1958), modernized Brown’s music on his 2015 album Reflections of Brownie. Brown’s grandson, Clifford Benjamin Brown III (born 1982), plays trumpet on one of the tracks, “Sandu”. Research more about this great American Champion and share it with your babies. Make it a champion day!