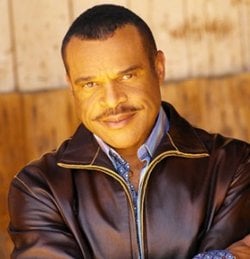 GM – FBF – Today’s American Champion was an American gospel music singer and pastor. He was consecrated to the bishopric in 2000.Today in our History – July 11, 2010 – Walter Lee Hawkins (May 18, 1949 – July 11, 2010) dies.We are deeply saddened to announce the passing of Gospel recording artist Walter Hawkins at 2:48 PST July 11th at his home. For the last two years, Hawkins has been battling pancreatic cancer. He was 61 years old. Please keep the Hawkins family, The Love Center Family and the Gospel community, who have all been encouraged and blessed by his music through the years.Walter Hawkins was an American gospel music singer born May 18, 1949 in Oakland, California. One of gospel music’s most legendary figures, Bishop Walter Hawkins was one of the most beloved pastors and figures in contemporary Gospel Music today. In the Forty plus years of his career, he had created one of the most prolific and outstanding catalogs of hit gospel recordings and published songs.Walter is the brother of gospel singer Edwin Hawkins and Lynette Hawkins-Stephens. While married to Tramaine Hawkins, the couple had two children a son, Walter “Jamie” Hawkins, Jr. and a daughter, Trystan Hawkins with one granddaughter, Jahve Hawkins and one grandson, Jamie Daniel Hawkins. Walter “Jamie” Hawkins, Jr. is married to Myiia “Sunny” Davis-Hawkins. Hawkins started his career in one of his brother’s chorale, “The Northern California State Youth Choir” of the Church of God in Christ. Later on he accompanied his brother and made significant contributions to his career with the founding of The Edwin Hawkins Singers. This collaborative effort produced the hit song, “Oh Happy Day” which became one of the first gospel songs to crossover onto mainstream music charts.Walter left the group in the early ’70s. The following year, Hawkins became a pastor and founded the Love Center Church in East Oakland and established the Love Center Church in Oakland, CA. After forming the Love Center Choir, he recorded their first album as a church family. He used $1,800 he borrowed from his mother-in-law to complete the project. He and his Love Center Choir had considerable success with his Love Alive series, which collectively sold over a million copies from the ’70s through the ’90s. Recordings and published songs that include such great hits as Marvelous, Going Up Yonder, Changed, Be Grateful, Thank You, He’s That Kind Of Friend, Until I Found The Lord, Jesus Christ Is the Way, I’m Not The Same, Holy One, Spirit Now, Battle, I Love You Lord, Special Gift, Set Me Free, Is There Any Way, Everybody Ought To Know, My Gratitude, It’s Right and Good, Cry On, I’m So Thankful, Just In The Nick of Time, Jesus Made A Way, Thank You Lord, I Must Go On, I’m Going Away, Lord Give Us Time, Try Christ, I Feel Like Singing, Dear Jesus, God Is Standing By, I Love Jesus More, Follow Me, All You Need Is Christ, He Brought Me, He’ll Be There, Goin’ To A Place, I’m A Pilgrim, Never Alone, On & On, and so many more.Hawkins’ songs have been recorded by a who’s who in music ranging from Aretha Franklin and “American Idol” champ Ruben Studdard to Vickie Winans and M.C. Hammer. Hawkins and his groups have recorded with Van Morrison, Diahann Carroll, Sylvester (singer), Jeffrey Osborne, and many others.As elder statesmen in gospel, Hawkins became a favorite for cameo appearances in recent years. The Mississippi Mass Choir had a hit with him on “Hold, On, Soldier” in 1993 and Donald Lawrence & the TriCity Singers watched him steal the show on “Seasons” from their “Go Get Your Life Back” CD in 2002. The 2001 “Love Alive V” CD featured a huge comeback hit for Hawkins with the ballad, “Marvelous.” Hawkins’ final solo CD “A Song in My Heart” won a Stellar Award for Traditional Gospel Album of the Year in 2006. He was inducted into the Christian Music Hall of Fame in 2007.After surgery for pancreatic cancer in late 2008, the Hawkins Family (Walter, Edwin, Tramaine, and sister, Lynette) staged a successful, multi-city Hawkins Family reunion concert tour. At the time of his death, Hawkins was planning a new “Love Alive” CD concert recording for this fall.Hawkins is survived by his two children, Walter “Jamie” and Trystan Hawkins; daughter-in-law, Myiia Hawkins; two grandchildren Jamie- Daniel and Jahve; a host of nieces and nephews; the Love Center Church family and Choir; and his siblings Carol, Feddie, Edwin, Daniel, and Lynette. Research more about this great American Champion and share it with your babies. Make it a champion day!