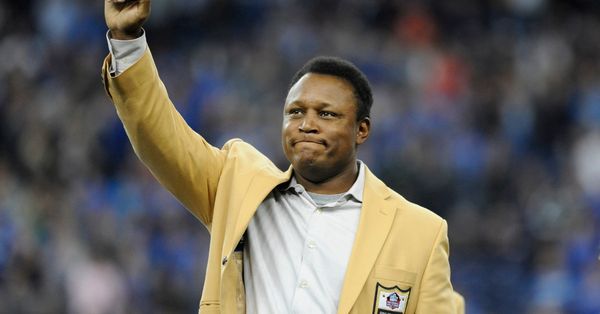 GM – FBF – Today’s American Champion is an American former professional football player who was a running back for the Detroit Lions of the National Football League (NFL). A Pro Bowl invitee in each of his ten NFL seasons and two-time NFL Offensive Player of the Year, he led the league in rushing yards four times and established himself as one of the most elusive runners in pro football with his quickness and agility.In 2007, he was ranked by NFL Network’s NFL Top 10 series as the most elusive runner in NFL history and was also voted the greatest short player of all time as well as being placed #1 on the list of the greatest players never to play in a Super Bowl. He is often regarded as one of the greatest running backs in the NFL history.Today in our History – Barry Sanders (born July 16, 1968) was born on this date.Sanders played college football for the Oklahoma State Cowboys football team, where, as a junior in 1988 he compiled what is considered one of the greatest individual seasons in college football history, rushing for 2,850 yards and 42 touchdowns in 12 games. He was awarded the Heisman Trophy as the most outstanding college player in the nation and was unanimously recognized as an All-American. Sanders was first inducted into the Kansas Sports Hall of Fame in 1998. He then was inducted into the College Football Hall of Fame in 2003 and in that same year inducted into the Michigan Sports Hall of Fame.Sanders joined the Lions in 1989 and had an immediate impact, winning the NFL’s Rookie of the Year award. Through ten seasons in Detroit, he averaged over 1,500 rushing yards per season and just under 100 rushing yards per game. In 1997, he became the third player to rush for over 2,000 yards in a season and was named the NFL Most Valuable Player (He was co-MVP with Green Bay Quarterback Brett Favre). Still seemingly in his prime, Sanders unexpectedly retired from football after the 1998 season, 1,457 yards short of breaking the then NFL’s all-time rushing record. His number 20 jersey was retired by the Lions, and he was inducted into the Pro Football Hall of Fame in 2004. A year later Sanders was also inducted into the Oklahoma Sports Hall of Fame along with fellow pro and college football Hall of Famer Thurman Thomas.In 2019, Sanders was included in the National Football League 100th Anniversary All-Time Team as one of the greatest all-time running backs alongside fellow Hall of Fame running backs such as Jim Brown, Walter Payton, Earl Campbell, Emmitt Smith, and many others.Barry Sanders, born on July 16, 1968, in Wichita, Kanas is a former American football running back. He was the son of William, who was a Roofer, and Shirley, a registered nurse. He was one of the eleven children. He attended Wichita North High School. During his career with the Detroit Lions of the National Football League, he was a ten-time pro bowl selection and four-time rushing champion.Sanders was always athletic and had a great love for basketball.Although his father believed that it would be better for him to develop an interest in football as it would help him in winning a college scholarship. In his early years, Sanders became the starting running back in the fourth game of his senior year, where he rushed for 1417 yards which earned him all-state honors. Even though he was a stellar athlete, he received scholarships from only Emporia State, the University of Tulsa, and Oklahoma State. He decided on going to Oklahoma State.Oklahoma State University had very high hopes for Sanders and football. They demanded at least 50-60 hours a week due to which Sanders lacked behind in his schoolwork. During his freshman and sophomore years, Sanders played second string to Thurman Thomas. During his junior here, Sanders became the starter and proceeded to smash 13 NCAA records. Sanders had most rushing yards of 2,628 and most touchdowns 39 in a season, which led to his nomination for the coveted Heisman Trophy. After receiving the trophy, Sanders entered NFL instead of continuing his studies at Oklahoma State University, mostly because he wanted to support his family financially.After entering the NFL, Sander signed a $6.1 million five-year contract with The Detroit Lions. They selected him with the 3rd overall pick in the 1989 draft. In the same year, Sanders was named Sporting News NFL Rookie of the Year. Due to a contract dispute, Sanders missed his rookie training camp in 1989. Sanders, during the regular season, ran for 18 yards in the first carry and a touchdown during his fourth. During the 1990s, Sanders was featured as running back on the Lions Teams that made the playoffs. In 1991, Sanders averaged 4.5 yards per rushing attempt and compiled a total of 1,548 yards, the same year he was named NFCs Most Valuable Player by the NFL Players Association. Although in 1992 and 1993, his scores went a little down to 1,352 and 1,115 respectively due to his injury. In 1994, he averaged 5.7 yards per rushing attempt but scored only seven touchdowns. 1997 turned to be a good year as he compiled a total of 2,053 yards rushing and averaging a 6.1 yards. At the end of 1998, Sanders had a total of 15,269. In 1997, he was named Sporting News Player of the Year.In 1999, Sanders announced his retirement. It was believed that Sanders could have surpassed Walter Payton’s career record of 16,726 but Sanders did not choose that path. He was well-respected and one of the league’s most popular players. Research more about this great American Champion and share it with your babies. Make it a champion day!