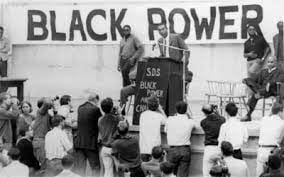 GM – FBF – Today’s American Champion event was the Amiri Baraka (LeRoi Jones) was a part of the planning of the Black Power Conference chaired by Dr. Nathan Wright, scheduled to take place in Newark in the summer of 1967 before the Rebellion hit.The Black Power Conference Committee was composed of nationally recognized black leaders of all stripes, and Nathan Wright was selected to coordinate this 3-day event at an Episcopal Church property in downtown Newark. After the rebellion, the local power brokers said, “call it off!” but the planners said, “No way!” And so the conference convened, fresh on the heels of the dying embers of the fires that consumed Newark for five days.Today in our History – July 20, 1967 – The first Black Power Conference held in Newark, NJ in 1967. Before the 1967 Newark conference even began, the community had seen several violent riots over the course of a few days in early July. These riots started after the police brutality of John Smith, a taxi driver, was released to the public. Mr. Smith had been pulled over for traffic violations, and he was found later that day in jail battered by his arresting officers.The predominantly black community who had faced oppression by the police for countless years decided to rebel and fight for change. This riot ended up taking place over 5 days with 26 deaths, 750 injuries, and 1000 people jailed (Wang). The total cost of damage was estimated to be about 10 million dollars. Martin Luther King Jr. himself commented on how Newark had “a short fuse and a long train of abuse” (Asante).This riot started a stir that had some members of the Newark planning committee worried to continue with the conferences plans, but ultimately the conference was still held. This riot signified the increasing impatience of the black community with white oppression. This conference was needed more than ever in Newark, New Jersey to bring peace to the city.The Newark Conference was a three-day gathering in Newark, New Jersey in the summer of 1967 that focused on the oppression of African Americans and the possible solutions to obtain a better quality of life. This was the first Black Power conference ever held, and it comprised of organizations such as the NAACP, The Urban League, Afro-American Unity, Harlem Mau and Maus along with big names such as Jessie Jackson, Ron Karenga, Floyd McKissick, Rap Brown, and Charles 27X Kenyatta. (The Black Power Conference).This event ultimately turned out to be one of the largest gatherings for the Black Power leaders, which included not only American representatives, but also people from Bermuda and Nigeria. The conference included workshops and lectures for the group in order to hopefully create some sort of solution to the escalating issues that blacks every where faced. Many ideas were brought up focusing heavily on developing programs that would help better the black community and its youth.Materially, the only official consequence of this conference was the Black Power Manifesto that demanded the end of “neo-colonialist control” of black populations on the globe and they wanted to unite African Americans by promoting a “philosophy of Blackness” (Hicks). The document also demanded reparations for the black community because of the horrors they had to face during slavery.While this manifesto is the only official resolution that was passed at the conference, more than 80 others were proposed. Additionally, this conference still brought major leaders together and ignited the long journey that African Americans have faced in their goals to reach equality.The usable memory of the Newark conference has led to countless other Black Power conferences in the nation. These conferences have swept from San Fransisco to the College of Charleston in South Carolina. Particularly, the State of the Black World Conference IV held a conference in late 2016 in Newark, New Jersey; they held this conference in memory of Amiri Baraka.Amiri Baraka, or LeRoi Jones, was part of the planning committee under Dr. Nathan Wright for the 1967 Newark Black Power Conference. Baraka had participated in the Newark riots and was arrested under allege gun possession charges. He was brutally beaten by police, but was finally released from the jail and hospital to make it in time to the conference.He soon became a predominant figure after the conference writing several controversial poems and papers. (The Black Power Conference). Beyond the spectrum of just conferences, nothing had ever occurred similar to the largest Black Power gathering for leaders at that time. It helped to develop a systematic approach to combating inequality among all groups in the United States.The National Conference was the first Black Power gathering of its kind: it held workshops and presented papers for programs that would help empower black people. Following 1967, subsequent conferences were held in ‘68 and ‘69.The conferences supported the growth of these Black Power organizations and reflected the ideas that black youngsters arrived at when non-violent civil rights persuasion failed. The movement was a forerunner to many current approaches to political activism, engaging with ideas of structural and systemic inequality and identity politics. Looking at the history of the Black Power movement, it is easy to see its lasting effects in the current #BlackLivesMatter movement and the ongoing struggle for black empowerment.Even though this conference was held 54 years ago, the struggle African Americans face are still present today despite the advancements this country has made. One thing has changed, however, African Americans learned from these prior conferences and riots that they must take matters into their own hands to finally grasp their own destiny. Research more about this great American Champion event and share it with your babies. Make it a champion day!