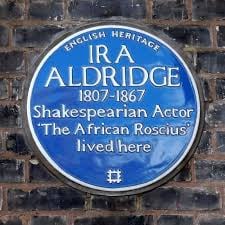 GM – FBF – Today’s American Champion was an American and later British actor and playwright who made his career after 1824 largely on the London stage and in Europe, especially in Shakespearean roles. Born in New York City, Aldridge is the only actor of African-American descent among the thirty-three actors of the English stage honoured with bronze plaques at the Shakespeare Memorial Theatre at Stratford-upon-Avon.He was especially popular in Prussia and Russia, where he received top honours from heads of state. At the time of his sudden death, while on tour in Poland, he was arranging a triumphant return to America, with a planned 100-show tour to the United States. Aldridge married twice, once to an Englishwoman, once to a Swedish woman, and had a family in England. Two of his daughters became professional opera singers.Today in our History – July 24, 1807 – Ira Frederick Aldridge (July 24, 1807 – August 7, 1867) was born.Ira Frederick Aldridge was the first African American actor to achieve success on the international stage. He also pushed social boundaries by playing opposite white actresses in England and becoming known as the preeminent Shakespearean actor and tragedian of the 19th Century.Ira Frederick Aldridge was born in New York City, New York on July 24, 1807 to free blacks Reverend Daniel and Lurona Aldridge. Although his parents encouraged him to become a pastor, he studied classical education at the African Free School in New York where he was first exposed to the performance arts. While there he became impressed with acting and by age 15 was associating with professional black actors in the city. They encouraged Aldridge to join the prestigious African Grove Theatre, an all-black theatre troupe founded by William Henry Brown and James Hewlett in 1821. He apprenticed under Hewlett, the first African American Shakespearean actor. Though Aldridge was gainfully employed as an actor in the 1820s, he felt that the United States was not a hospitable place for theatrical performers. Many whites resented the claim to cultural equality that they saw in black performances of Shakespeare and other white-authored texts. Realizing this, Aldridge emigrated to Europe in 1824 as the valet for British-American actor James William Wallack.Aldridge eventually moved to Glasgow, Scotland and began studies at the University of Glasgow, where he enhanced his voice and dramatic skills in theatre. He moved to England and made his debut in London in 1825 as Othello at the Theatre Royal Covent Garden, a role he would remain associated with until his death. The critic reviews gave Aldridge the name Roscius (the celebrated Roman actor of tragedy and comedy). Aldridge embraced it and began using the stage name “The African Roscius.” He even created the myth that he was the descendant of a Senegalese Prince whose family was forced to escape to the United States to save their lives. This deception erased Aldridge’s American upbringing and cast him as an exotic and almost magical being.Throughout the mid-1820s to 1860 Ira Aldridge slowly forged a remarkable career. He performed in London, Liverpool, Edinburgh, Bath, and Bristol in King Lear, Othello, Macbeth, and The Merchant of Venice. He also freely adapted classical plays, changing characters, eliminating scenes and installing new ones, even from other plays. In 1852 he embarked on a series of continental tours that intermittently would last until the end of his life. He performed his full repertoire in Prussia, Germany, Austria, Switzerland, Hungary, and Poland. Some of the honors he received include the Prussian Gold Medal for Arts and Sciences from King Frederick, the Golden Cross of Leopold from the Czar of Russia, and the Maltese Cross from Berne, Switzerland.Aldridge died on August 7, 1867 while on tour in Lodz, Poland. He was 60 at the time of his death. Aldridge had been married twice and left behind several children including a daughter named Luranah who would, in her own right, go on to become a well-known actress and opera singer. There is a memorial plaque at the Royal Shakespeare Theatre in Stafford-upon-Avon, in honor of his contributions to the performing arts. In 2014 a second plaque was unveiled in Lodz, Poland to honor his memory and legacy. Research more about this great American Champion and share it with your babies. Make it a champion day!