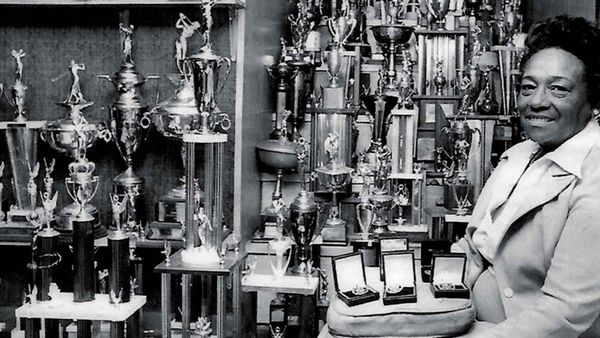 GM – FBF – Today’s American Champion was an African-American amateur golfer. Black newspapers had called her “The Queen of Negro Women’s Golf.” As stated in Arthur Ashe’s book, Hard Road to Glory, many observers called Gregory the best African-American female golfer of the 20th century. Gregory learned to play golf while her husband was away serving in the Navy during World War II. In 1948 Gregory won a tournament in Kankakee, Illinois, during which she defeated former United Golf Association champions Lucy Mitchell, Cleo Ball, and Geneva Wilson.In 1950 she won the Sixth City Open in Cleveland, the Midwest Amateur, and the United Golf Association’s national tournament, as well as tying the women’s course record at a Flint, Michigan tournament. On September 17, 1956, she began competing in the U.S. Women’s Amateur Championship, thus becoming the first African-American woman to play in a national championship conducted by the United States Golf Association. Because she was African-American, Gregory was denied entry into the player’s banquet at Congressional Country Club in Bethesda at the conclusion of the U.S. Women’s Amateur in 1959. Also, in Gary, Indiana, African-Americans were banned from playing the South Gleason Park Golf Course. However, in the early 1960s, Gregory played that course, stating, “My tax dollars are taking care of the big course and there’s no way you can bar me from it.” She was followed by other African-Americans who played the course soon after her, and the ban was ended. In 1963, Gregory was mistaken as a maid by Polly Riley, another contestant at the Women’s Amateur in Williamstown, Massachusetts. In 1971, Gregory was runner-up at the USGA Senior Women’s Amateur, making her the first African-American to finish as runner-up in a USGA women’s competition. In 1989, at age 76 and competing against a field of 50 women, she won the gold medal in the U.S. National Senior Olympics, beating her competitors by 44 strokes. In all, during her career, Gregory won nearly 300 tournaments. Gregory was also the first African-American appointed to the Gary [Indiana] Public Library Board, which occurred in 1954. A granite marker in Gregory’s memory stands at the sixth hole of the South Gleason Park Golf Course in Gary, Indiana. She was inducted into the United Golf Association Hall of Fame in 1966, the African American Golfers Hall of Fame in 2006, the National African American Golfers Hall of Fame in 2011, and the National Black Golf Hall of Fame in 2012. In 2000, the Urban Chamber of Commerce of Las Vegas began the Ann Gregory Memorial Scholarship Golf Tournament, which lasted seven yearsToday in our HISTORY – Ann Gregory (July 25, 1912 – February 5, 1990) was born.Ann Gregory was a pioneering African American female golfer. Born in Aberdeen, Mississippi, on July 25, 1912, Gregory was the middle child of five born to Henry and Myra Moore. Her parents died in a car accident when she was four, and their former employer, a white family named Sanders, took her in. Gregory graduated from high school in 1930 and moved in with her sister and brother-in- law in Gary, Indiana. She worked as a caterer and began playing tennis as a hobby, but by 1937, she entered and won the Gary Amateur City Championship.In 1938 Moore married Leroy Percy Gregory, a steel mill worker, who also enjoyed playing golf. By 1944, she was receiving lessons from Pro-golfer Calvin Ingram. The following year, she entered her first professional tournament, the 8th Annual Chicago Women’s Golf Club Tournament, and finished second place. A member of the UGA, an organization for African American Golfers formed in 1925, Gregory was often invited to play in famous tournaments, causing a media uproar as she was usually the only African American woman competing.In 1948 Gregory won her first of five Chicago Women’s Golf Club tournaments, as well as a tournament in Kankakee, Illinois, where both she and her husband competed and won in their categories. In 1950 she won six of the seven tournaments she entered that year and was dubbed “The Queen of Negro Golf.” In 1956 the Chicago Women’s Golf Club became the first African American organization to join the United States Golf Association, and Gregory soon became the first African American to play in the SGA women’s national championship.Despite her accomplishments, Gregory had to fight the racism of her era. She broke down the color barrier in Indiana at South Gleason Golf Course by demanding to play the full eighteen holes when African Americans were allowed to play only nine. Once, she was mistaken for a maid by a fellow player during a tournament, which led to a very embarrassing moment for the player when she faced Gregory on the green.Gregory took home over four hundred trophies and won over three hundred golf tournaments from all over the world in a career that spanned over five decades. She won the Pepsi Cola International Championship in Puerto Rico (1963, 1964), Nassau (1965), Jamaica (1966), Spain (1967), and Hawaii (1968), playing often alongside celebrities like Althea Gibson, Joe Lewis, and Jackie Robinson. Her golfing career ended in 1989 with a Gold Medal at the Senior Olympic Games. She died the next year on February 5, 1990 at the age of 77.Gregory was deeply involved in her community and was the first African American to be appointed as a trustee of the Gary Public Library Board, an executive member of the Gary United Fund, and a member of the St. Mary’s Medical Center advisory board. She was a member and trustee of the Delaney Memorial United Methodist Church. In 2007 the Urban Chamber of Commerce in Las Vegas, Nevada, held the first of seven annual Ann Gregory Memorial Scholarship Golf Tournaments, awarding up to $200,000 to deserving college students. Gregory was inducted into the United Golf Association Hall of Fame (1966), the African American Golfers Hall of Fame (2006), the National African American Golfers Hall of Fame (2011), and the National Black Golf Hall of Fame (2012).A granite marker in her memory stands at the sixth hole of the South Gleason Golf Course in Gary, Indiana. Gregory is survived by her daughter Jo Ann and three grandchildren. Research more this great American Champion and share it with your babies. Make it a champion day!