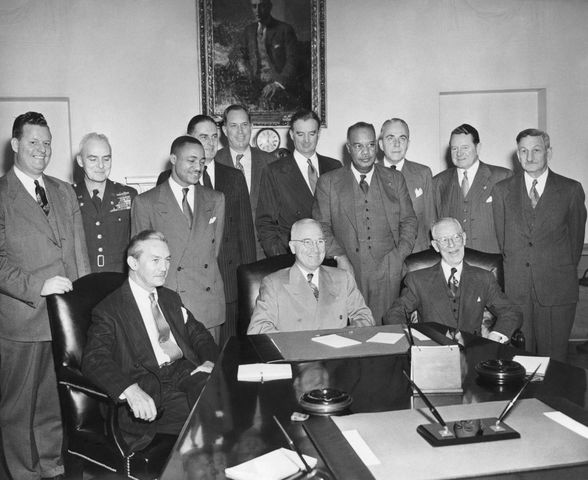 GM – FBF – Today’s American Champion did what no other in his position has done. It assisted our people to apply for better pay jobs, better education and housing.Today on our History – July 26, 1948 – President Harry S. Truman signs Executive Order 9981—ending discrimination in the military—on July 26, 1948.President Harry S. Truman signs Executive Order 9981—ending discrimination in the military—on July 26, 1948. Truman’s order ended a long-standing practice of segregating Black soldiers and relegating them to more menial jobs.African Americans had been serving in the United States military since the Revolutionary War, but were deployed in their largest numbers during World War II. By December 31, 1945, more than 2.5 million African Americans had registered for the military draft, and with African American women volunteering in large numbers throughout the war the U.S. Armed Forces had become the number one employer of Black people. By the time WWII ended, some 900,000 African Americans had served in the Army, Army Air Forces, Navy, Marine Corps, Coast Guard and Army Nurse Corps.Black WWII veterans were eligible for a free college education under the Servicemen Readjustment Act of 1944—the GI Bill—as well as other benefits, but most faced discrimination when trying to access their benefits. This led many veterans to re-examine their poor treatment while they were in service.After witnessing racism in the service, Grant Reynolds resigned from his commission as a WWII chaplain and joined with the activist A. Philip Randolph to co-chair the Committee Against Jim Crow in Military Service and Training. By composing letters and telegrams, holding protest rallies and hearings, and threatening to conduct a nationwide draft resistance campaign, the Committee worked with groups like the Committee to End Segregation in the Armed Forces and the League for Non-Violent Civil Disobedience Against Military Segregation to demand equal treatment for Black people in the United States Armed Forces.The pressure from these groups pushed President Truman to establish a Commission on Civil Rights which, in October 1947, issued a report calling for a permanent Fair Employment Practices Commission, federal anti-lynching and anti-poll tax laws, and a bolstering of the Department of Justice’s Civil Rights Division.Truman urged the U.S. Congress to move forward with the Commission’s recommendations. When Congress rejected his pleas, Truman pushed for many of the proposals on his own. One of his most significant actions was the signing of Executive Order 9981, which states: “It is hereby declared to be the policy of the President that there shall be equality of treatment and opportunity for all persons in the armed services without regard to race, color, religion or national origin.”Research more about this great American Champion and share it with your babies. Make it a champion day!