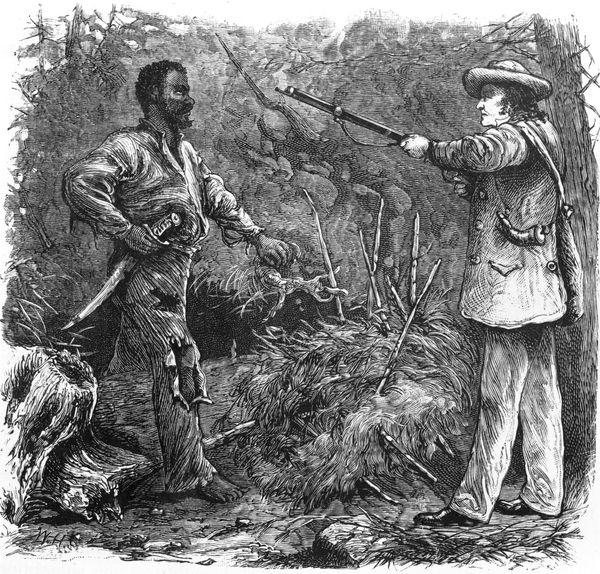 GM – FBF – Today’s American was a rebellion of enslaved Virginians that took place in Southampton County, Virginia, in August 1831, led by Nat Turner. The rebels killed between 55 and 65 people, at least 51 of whom were white. The rebellion was put down within a few days, but Turner survived in hiding for more than two months afterwards. The rebellion was effectively suppressed at Belmont Plantation on the morning of August 23, 1831. There was widespread fear in the aftermath, and militias organized in retaliation to the rebels. The state executed 56 enslaved people accused of being part of the rebellion, and many non-participant enslaved individuals were punished in the frenzy. Approximately 120 enslaved people and free blacks were killed by militias and mobs in the area. State legislatures passed new laws prohibiting education of enslaved people and free black people, restricting rights of assembly and other civil liberties for free black people, and requiring white ministers to be present at all worship services.Today in our History – August 22, 1831 – Nat Turner’s Rebellion (also known as the Southampton Insurrection)On the evening of August 21–22, 1831, an enslaved preacher and self-styled prophet named Nat Turner launched the deadliest slave revolt in the history of the United States. Over the course of a day in Southampton County, Turner and his allies killed fifty-five white men, women, and children as the rebels made their way toward Jerusalem, Virginia (now Courtland). Less than twenty-four hours after the revolt began, the rebels encountered organized resistance and were defeated in an encounter at James Parker’s farm. Following this setback, Turner and other rebels scrambled to reassemble their forces. The next day, a series of defeats led to the effective end of the revolt. Whites quickly and brutally reasserted their control over Southampton County, killing roughly three dozen blacks without trials. Within a few days of the revolt, white leaders in Southampton became increasingly confident that the revolt had been suppressed and worked to limit the extralegal killing of blacks. Instead, white leaders made sure that the remaining suspected slaves were tried, which also meant that the white slave owners would receive compensation from the state for condemned slaves, a benefit that the state did not extend to slave owners who owned suspected rebels killed without trials. This effort, which reached a climax with the declaration of martial law in Southampton a week after the revolt began, meant that Southampton court system would ultimately decide what to do with suspected slave rebels. Trials began on August 31, 1831, and the majority of trials were completed within a month. By the time that the trials were finished the following spring, thirty slaves and one free black had been condemned to death. Of these, nineteen were executed in Southampton: Governor John Floyd, following the recommendations of the court in Southampton, commuted twelve sentences. Turner himself had eluded whites throughout September and into October when two slaves spotted him close to where the revolt began. Once detected, Turner was forced to move, but he was unable to elude the renewed manhunt. He was captured on October 30. While in jail awaiting trial, Turner spoke freely with whites about the revolt. Local lawyer Thomas R. Gray approached Turner with a plan to take down his confessions.The Confessions of Nat Turner was published within weeks of the Turner’s execution on November 11, 1831, and remains one of the most important sources for historians working on slavery in the United States. The revolt had important ramifications outside of Southampton, as several southern communities feared that slaves in their community were part of the revolt. In Richmond, Thomas Jefferson Randolph—the grandson of Thomas Jefferson—tried but failed to convince the General Assembly to enact a plan that would have put the state on the path to gradual emancipation. Abolitionists remembered the revolt as an important example of both slaves’ hate for the system of slavery and their bravery. The cultural legacy of the revolt is still vibrant; the revolt remains the clearest example of overt resistance in the United States to the system of slavery. Research more about this great American Champion and share it with your babies. Make it a champion day!