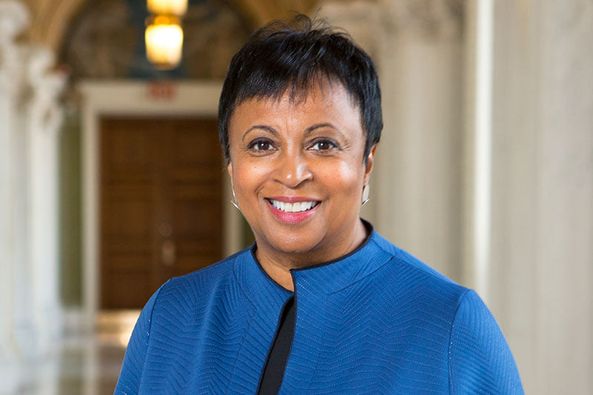 GM – FBF – Today’s American Champion is an American librarian and the 14th Librarian of Congress. She is the first woman and the first African American to hold the post. She is the first professional librarian appointed to the post in over 60 years. Born in Tallahassee, Florida, she began her career at the Chicago Public Library, eventually earning a doctorate in library science from the University of Chicago. From 1993 until 2016, she was the CEO of Enoch Pratt Free Library in Baltimore, Maryland, and president of the American Library Association (ALA) from 2003 to 2004.During her presidency, she was the leading voice of the ALA in speaking out against the newly passed United States Patriot Act. In 2020, she was elected to the American Philosophical Society.Today in our History – September Carla Diane Hayden (born August 10, 1952) was sworn in as the 14th Librarian of Congress.On September 14, 2016, Dr. Carla Hayden was sworn in by Chief Justice John G. Roberts as the 14th Librarian of Congress. The third professional librarian, the first woman and the first person of African American descent to hold the position, Dr. Hayden had served as the Chief Executive Officer of the Enoch Pratt Free Library system in Baltimore. Her work there earned her the Library Journal Librarian of the Year award, the first African American to receive the award. She has also served as president of the American Library AssociationDr. Hayden was nominated to serve as Librarian of Congress by President Barack Obama on February 24, 2016. During her confirmation hearing before the Senate Committee on Rules and Administration Dr. Hayden was introduced by Senators Barbara Mikulski and Benjamin Cardin as well as former Senator Paul Sarbanes of Maryland. After her appearance at the confirmation hearing the committee voted to move her nomination to the full Senate where it was approved on July 13, 2016.Dr. Hayden noted in an interview for the Library of Congress Magazine (LCM), that she remembers being surprised that there was a profession that was dedicated to books and reading and providing knowledge to people, and she thought it was an ideal career for her. When she started working at the Chicago Public Library she spoke about walking in to the store front library she was assigned to and seeing a young lady who she was to work with sitting on the floor having story time with children with autism. Hayden remembers thinking, “Wait a minute. This is a different type of profession. You’re bringing things right to people. I was hooked. Seeing what libraries could do in communities and how they could help people just opened my eyes.”In her speech after she was sworn in, she discussed the importance of harnessing the power of technology to provide access to the unparalleled resources at the Library of Congress. She noted her excitement in seeing the papers of Rosa Parks and knowing that this collection of papers had been digitized and was available to everyone.She also noted the importance of using the staff to build on the legacy of the Library and to make it accessible to everyone. In her remarks she said:“When I received the call from the White House about this opportunity, and was asked, ‘Will you serve?’ Without hesitation I said ‘yes’. But we cannot do it alone. I am calling on you, both who are here in person and those watching virtually, that to have a truly national library, an institution of opportunity for all: it is the responsibility of all.”She noted that her vision is to make sure that the people of the United States know that they have a national treasure that is part of their heritage and that everyone can find something in or created by the Library of Congress that relates to their lives or where they want to go.She wants to make the collections accessible and wants the Library to be seen as the “go to” place for information. Research more about this great American Champion and share it with your babies. Make it a champion day!