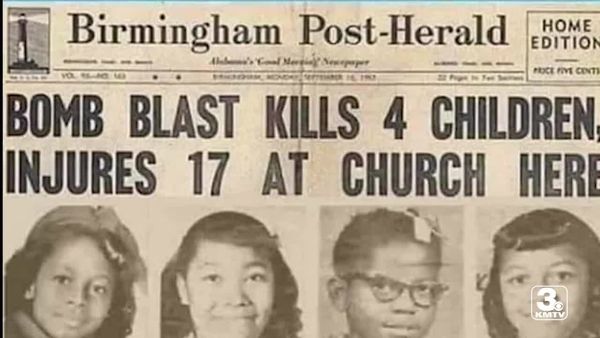 GM – FBF – Today’s American Tragedy should never be forgotten. In fact, when you can get to this city you need to go and see for yourself what a fellow human being would do to other human beings.Today in our History – September 15, 1963 – Four Black schoolgirls killed in Birmingham church bombing.On September 15, 1963, a bomb explodes during Sunday morning services in the 16th Street Baptist Church in Birmingham, Alabama, killing four young girls: Addie Mae Collins (14), Cynthia Wesley (14), Carole Robertson (14) and Carol Denise McNair (11).With its large African American congregation, the 16th Street Baptist Church served as a meeting place for civil rights leaders like Martin Luther King, Jr., who once called Birmingham a “symbol of hardcore resistance to integration.”Alabama’s governor, George Wallace, made preserving racial segregation one of the central goals of his administration, and Birmingham had one of the most violent and lawless chapters of the Ku Klux Klan.The church bombing was the third in Birmingham in 11 days after a federal order came down to integrate Alabama’s school system. Fifteen sticks of dynamite were planted in the church basement, underneath what turned out to be the girls’ restroom.The bomb detonated at 10:19 a.m., killing Cynthia Wesley, Carole Robertson and Addie Mae Collins—all 14 years old—and 11-year-old Denise McNair. Immediately after the blast, church members wandered dazed and bloodied, covered with white powder and broken stained glass, before starting to dig in the rubble to search for survivors. More than 20 other members of the congregation were injured in the blast.When thousands of Black protesters assembled at the crime scene, Wallace sent hundreds of police and state troopers to the area to break up the crowd. Two young Black men were killed that night, one by police and another by racist thugs. Meanwhile, public outrage over the bombing continued to grow, drawing international attention to Birmingham. At a funeral for three of the girls (one’s family preferred a separate, private service), King addressed more than 8,000 mourners.A well-known Klan member, Robert Chambliss, was charged with murder and with buying 122 sticks of dynamite. In October 1963, Chambliss was cleared of the murder charge and received a six-month jail sentence and a $100 fine for the dynamite.Although a subsequent FBI investigation identified three other men—Bobby Frank Cherry, Herman Cash and Thomas E. Blanton, Jr.—as having helped Chambliss commit the crime, it was later revealed that FBI chairman J. Edgar Hoover blocked their prosecution and shut down the investigation without filing charges in 1968. After Alabama Attorney General Bill Baxley reopened the case, Chambliss was convicted in 1977 and sentenced to life in prison.Efforts to prosecute the other three men believed responsible for the bombing continued for decades. Though Cash died in 1994, Cherry and Blanton were arrested and charged with four counts of murder in 2000. Blanton was convicted and sentenced to life in prison. Cherry’s trial was delayed after judges ruled he was mentally incompetent to stand trial. This decision was later reversed. On May 22, 2002, Cherry was convicted and sentenced to life, bringing a long-awaited victory to the friends and families of the four young victims. Research more about this great American tragedy and shear it with your babies. Make it a champion day!