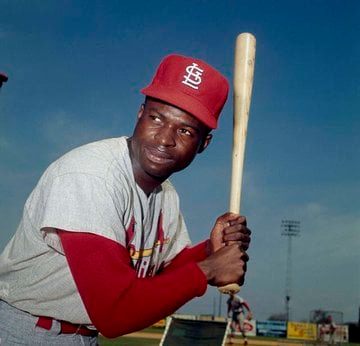 GM – FBF – Today’s American Champion was an American professional baseball outfielder. He began his 19-year Major League Baseball (MLB) career with the 1961 Chicago Cubs but spent the majority of his big league career as a left fielder for the St. Louis Cardinals. He was inducted into the National Baseball Hall of Fame in 1985 and the St. Louis Cardinals Hall of Fame in 2014. He was a special instructor coach for the St. Louis Cardinals.He was best known for his base stealing, breaking Ty Cobb’s all-time major league career steals record and Maury Wills’s single-season record. He was an All-Star for six seasons and a National League (NL) stolen base leader for eight seasons. He led the NL in doubles and triples in 1968. He also led the NL in singles in 1972, and was the runner-up for the NL Most Valuable Player Award in 1974.Today in our History – September 23, 1979 – Louis Clark Brock (June 18, 1939 – September 6, 2020) stole a record of 935 bases and became the all-time major league record holder.If it’s been said once, it’s been said a million times. The Cardinals’ acquisition of outfielder Lou Brock from the Chicago Cubs on June 15, 1964, ranks as perhaps the greatest steal in baseball history. St. Louis traded pitchers Ernie Broglio and Bobby Shantz and outfielder Doug Clemens in exchange for Brock and pitchers Jack Spring and Paul Toth.Over the course of his career with the Cardinals, Brock established himself as the most prolific base stealer in baseball history to that time. His 938 stolen bases stood as the major league record until Rickey Henderson bettered the mark in 1991. Brock’s total remains the National League standard, and he holds the major league record with 12 seasons of 50 or more steals.Brock led the N.L. in thefts on eight occasions (1966 to 1969 and 1971 to 1974). He set the season record with 118 in 1974, bettering the mark of 104 by Maury Wills during the 1962 campaign. In 1978, the N.L. announced that its annual stolen base leader would receive the Lou Brock Award, making Brock the first active player to have an award named after him.But Brock was more than a base burglar. He was a career .293 batter with 3,023 hits. Seven times he batted at a .300 or better clip. In 1967, Brock slugged 21 home runs and had 76 RBI from the leadoff spot. He also had 52 stolen bases to become the first player in baseball history with 20 homers and 50 steals.The following year, Brock topped the N.L. in doubles (46), triples (14) and stolen bases (62), the first player in the Senior Circuit to do so since Honus Wagner of the Pittsburgh Pirates in 1908. Brock joined the 3,000-hit club Aug. 13, 1979, with a fourth-inning single off Dennis Lamp of the Chicago Cubs at Busch Stadium.Brock paid immediate dividends in St. Louis, batting .348 for the balance of the 1964 season and propelling the Cardinals from eighth place in the N.L. to a World Championship over the New York Yankees. The Cardinals won the World Series again in 1967 over the Boston Red Sox and were N.L. champions in 1968. Brock was at his best in postseason play.His .391 career batting average (34-for-87) is a World Series record, while his 14 stolen bases are tied for the most all time with Eddie Collins of the Philadelphia Athletics and Chicago White Sox.On the Cardinals’ career lists, Brock ranks first in stolen bases (888 – Vince Coleman is second with 549); second in games (2,289), at-bats (9,125), runs (1,427), hits (2,713), doubles (434) and total bases (3,776); fourth in triples (121); fifth in walks (681); and eighth in RBI (814). He was a six-time N.L. All-Star.Brock has remained active in baseball since retiring as a player following the 1979 season. He worked in the Cardinals’ broadcast booth from 1981 to 1984; was a baserunning consultant for the Minnesota Twins in 1987,Los Angeles Dodgers in 1988 and Montreal Expos in 1993; and has served as a special instructor for the Cardinals (baserunning and outfield play) since 1995. He was a first-ballot Hall of Fame inductee in 1985. Research more about this great American and share with your babies. Make it a champion day!