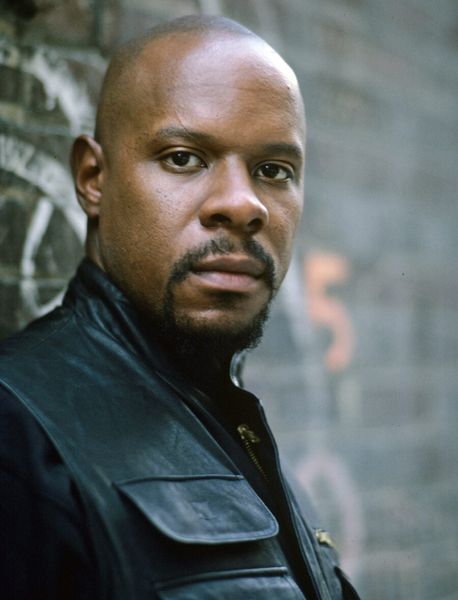 GM – FBF – Today’s American Champion is an American actor, director, singer, and educator. He is best known for his television roles as Captain Benjamin Sisko on Star Trek: Deep Space Nine, as Hawk on Spenser: For Hire and its spinoff A Man Called Hawk, and as Dr. Bob Sweeney in the Academy Award-nominated film American History X. While he was teaching at Rutgers University in New Brunswick, N.J., I had the honor of sitting in his classes as an adjunct professor. I will never forget those days.Today in our History – October 2, 1948 – Avery Franklin Brooks (born October 2, 1948 was born.Avery Brooks was born in Evansville, Indiana, the son of Eva Lydia (née Crawford), a choral conductor and music instructor, and Samuel Brooks, a union official and tool and die worker. His maternal grandfather, Samuel Travis Crawford, was also a singer who graduated from Tougaloo College in 1901. When Avery was eight years old his family moved to Gary, Indiana, after his father had been laid off from International Harvester. Brooks has said: “I was born in Evansville… but it was Gary, Indiana that made me.”The Brooks household was filled with music. His mother, who was among the first African-American women to earn a master’s degree in music at Northwestern University, taught music wherever the family lived. His father was in the choir Wings over Jordan, performing on CBS radio from 1937 to 1947. His maternal uncle Samuel Travis Crawford was a member of the Delta Rhythm Boys. “Music is all around me and in me, as I am in it,” Brooks has said.Brooks attended Indiana University and Oberlin College. He later completed his bachelor of arts, plus a master of fine arts from Rutgers University in 1976, becoming the first African American to receive an MFA in acting and directing from Rutgers.Spenser: for Hire: HawkIn 1985, Brooks assumed the role of Hawk on the ABC television detective series Spenser: For Hire, based on the mystery series published by Robert Parker. Hawk became a popular character, and after three seasons, Brooks in 1989 received his own, short-lived spinoff series, A Man Called Hawk.Brooks said of his role as Hawk: “I never thought of myself as the sidekick… I’ve never been the side of anything. I just assumed that I was equal.”Brooks returned to play Hawk in four Spenser television movies: Spenser: Ceremony, Spenser: Pale Kings and Princes, Spenser: The Judas Goat and Spenser: A Savage Place.Star Trek: Benjamin SiskoBrooks is best known in popular culture for his role as Commander, and later Captain, Benjamin Sisko on the syndicated science-fiction television series Star Trek: Deep Space Nine, which ran for seven seasons from 1993 to 1999.Brooks won the role of Commander Benjamin Sisko by beating 100 other actors from all racial backgrounds to become the first Black-American captain to lead a Star Trek series.In landing the role, Brooks also became the first Black-American male actor in a starring role in a first-run television drama since Clarence Williams III had starred as undercover police detective Linc Hayes in the iconic ABC “hippie” cop drama The Mod Squad from 1968 to 1973. Brooks was the second in American television history to do so since Bill Cosby co-starred with Robert Culp in the NBC spy series I Spy from 1965 to 1968. Brooks also directed nine episodes of the series, including “Far Beyond the Stars”, an episode focusing on racial injustice.Avery, like his character (Sisko), is a very complex man. He is not a demanding or ego-driven actor, rather he is a thoughtful and intelligent man who sometimes has insights into the character that no one else has thought about. He has also been unfailingly polite and a classy guy in all my dealings with him.Other rolesIn 1984, Brooks received critical praise for his featured role in PBS’s American Playhouse production of Half Slave, Half Free: Solomon Northup’s Odyssey, directed by Gordon Parks. The story chronicled the life of Solomon Northup, a free man from New York kidnapped and sold into slavery in 1841 and held until 1853, when he regained his freedom with the help of family and friends. It was adapted from Northup’s memoir, Twelve Years a Slave (1853).Brooks appeared in the 1985 television movie adaptation of Finnegan Begin Again. In 1987, he starred in the role of Uncle Tom in the Showtime production of Uncle Tom’s Cabin. A third project that allowed Brooks to highlight the history of African Americans was his performance in the 1988 television movie Roots: The Gift, which featured his fellow Star Trek actors LeVar Burton, Kate Mulgrew, and Tim Russ.In 1998, he appeared in the motion picture American History X, which also stars another Star Trek actor, Jennifer Lien. He also played the role of Paris in the 1998 film The Big Hit.In animated films, he supplied the voice of King Maximus in Happily Ever After: Fairy Tales for Every Child, and Nokkar in an episode of Disney’s Gargoyles.In 2001, Brooks was the voice-over and appeared in a series of IBM commercials for its software business unit. Reserach more about this great American Champion and share with your babies. Make it a champion day!