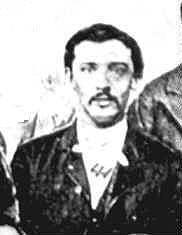 GM – FBF – Today’s American Champion was an African-American politician in South Carolina during the Reconstruction era. A Republican, he was elected to the state legislature in 1870 and as Secretary of State in 1872. While serving as secretary of state in 1873, He enrolled as the first student of color in the University of South Carolina medical school.Born into slavery, he was of mixed race; his enslaved mother was of mixed ethnicity. His father was a white planter and state politician who acknowledged Hayne and helped him get some education. October 7, 1873 – Henry E. Hayne enrolled as the first student of color in the University of South Carolina medical school. Henry E. Hayne was born in 1840 into slavery; his mixed-race mother was enslaved. His father was a white planter and state politician. His father acknowledged him and arranged for him to get some education, to provide social capital to help him in his later life.During Reconstruction, Hayne became active in the Republican Party, which had supported citizenship and suffrage for freedmen. He was elected in 1870 to represent Marion County in the South Carolina Senate. He was next elected as Secretary of State of South Carolina, serving from 1872 to 1877. The legislature had passed a new constitution in 1868 making public facilities available to all students, and while serving as secretary of state in the fall of 1873, Hayne enrolled in the medical school of the University of South Carolina, becoming the university’s first student of color.[1] He was majority white in ancestry. The event made national news and was covered by The New York Times; it described Hayne “as white as any of his ancestors”. Some faculty resigned in protest. In 1870 the university had hired its first black faculty member, Richard Greener, a recent graduate of Harvard University.After Democrats regained control of the state legislature and governor’s office in the election of 1876, in early 1877 they closed the college by legislative fiat. The Assembly passed a law prohibiting blacks from admission to the college, and authorized Claflin College in Orangeburg as the only institution for higher education for African Americans in the state. Hayne completed his education elsewhere.South Carolina’s electoral politics provided unique venues for Black empowerment during Reconstruction. Though largely overlooked in the historiography, the state’s flagship institution, the University of South Carolina, was a crucial piece of its Reconstruction philosophy. By 1868, legislators and university trustees radically altered their approach to higher education by expanding student scholarships and declaring it was a “tuition-free” institution open to all, regardless of race or class. These adjustments allowed Black men to matriculate by 1873, and they eventually comprised the majority of students until it was resegregated in 1877. This article reviews the Reconstruction government’s policies toward educational equality, the public response to the governmental shifts, and how students viewed their time at the institution. I reveal how African American politics in South Carolina directly intersected with educational concerns throughout the Reconstruction period. I conclude the essay by exploring how this historical moment was remembered or denied by subsequent generations.Legislator, secretary of state. Hayne was born on December 30, 1840, in Charleston, the son of a white father, James Hayne, and his free black wife, Mary. He was the nephew of Robert Y. Hayne, a former U.S. senator and governor of South Carolina. Henry Hayne was educated in Charleston and worked in the city as a tailor. With the outbreak of the Civil War, he volunteered for the Confederate army, but with the intention of escaping to Union lines. In July 1862 he crossed through enemy lines and joined Union forces, enlisting at Beaufort in the Thirty-third Regiment of United States Colored Troops (First South Carolina Volunteers), commanded by Thomas Wentworth Higginson. Enlisting as a private, Hayne was promoted to commissary sergeant in 1863.Following his discharge in early 1866, Hayne moved to Marion County. In 1868 the Freedmen’s Bureau hired him as principal of Madison Colored School, and he later served as a subcommissioner for the South Carolina Land Commission from 1869 to 1871. He served on the Republican state executive committee in 1867 and represented Marion County in the 1868 state constitutional convention. He was chairman of the Marion County Republican Party in 1870 and vice president of the state Union League. He represented Marion County in the state Senate from 1868 to 1872, and as South Carolina’s secretary of state from 1872 to 1877. As secretary of state, he took charge of the land commission and was credited for bringing honest and efficient leadership to what had previously been a notoriously mismanaged program.In 1873 Hayne enrolled in the medical school at the University of South Carolina. Though he left before earning his degree, Hayne was the first black student in the school’s history and inaugurated the institution’s first attempt at integration, which lasted until 1877.The Republican Party renominated him for secretary of state in 1876. He also served as a member of the state board of canvassers, which certified a Republican victory in the hotly contested election of 1876. The state supreme court, however, found the board to be in contempt, and jailed its members for a time. On May 3, 1877, under intense pressure, Hayne gave up his position as secretary of state to the Democratic candidate, Robert Moorman Sims.Little is known about Hayne’s personal life. He reportedly married on April 29, 1874, but the name of his wife was not given. Sometime before August 1877, Hayne left South Carolina. In January 1885 he was living in Cook County, Illinois with his wife Anna M. His later whereabouts are unknown. Research more about this great American Champion and share it with your babies. Make it a champion day!