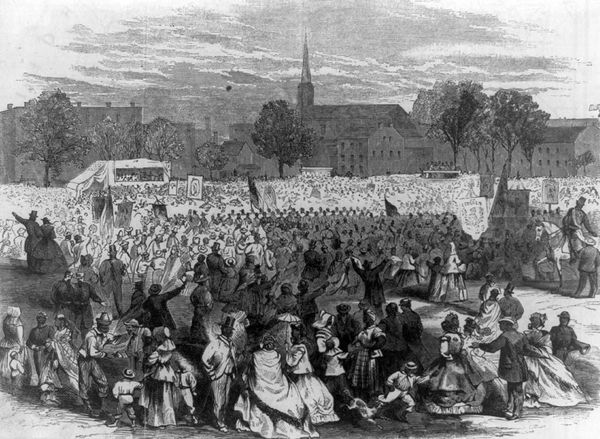 GM – FBF _ Today’s American Champion event was only 50 years after the defeat of the British at Yorktown, most Americans had already forgotten the extensive role black people had played on both sides during the War for Independence. At the 1876 Centennial Celebration of the Revolution in Philadelphia, not a single speaker acknowledged the contributions of African Americans in establishing the nation. Yet by 1783, thousands of black Americans had become involved in the war. Many were active participants, some won their freedom and others were victims, but throughout the struggle blacks refused to be mere bystanders and gave their loyalty to the side that seemed to offer the best prospect for freedom.Today in our History – October 8, 1775—Slaves and free Blacks are officially barred by the Council of Officers from joining the Continental Army to help fight for American independence from England. Nevertheless, a significant number of Blacks had already become involved in the fight and would distinguish themselves in battle. Additional Blacks were barred out of fear, especially in the South, that they would demand freedom for themselves if White America became free from Britain.African Americans and the American RevolutionBy 1775 more than a half-million African Americans, most of them enslaved, were living in the 13 colonies. Early in the 18th century a few New England ministers and conscientious Quakers, such as George Keith and John Woolman, had questioned the morality of slavery but they were largely ignored. By the 1760s, however, as the colonists began to speak out against British tyranny, more Americans pointed out the obvious contradiction between advocating liberty and owning slaves.In 1774 Abigail Adams wrote, “it always appeared a most iniquitious scheme to me to fight ourselves for what we are daily robbing and plundering from those who have as good a right to freedom as we have.”Widespread talk of liberty gave thousands of slaves high expectations, and many were ready to fight for a democratic revolution that might offer them freedom. In 1775 at least 10 to 15 black soldiers, including some slaves, fought against the British at the battles of Lexington and Bunker Hill. Two of these men, Salem Poor and Peter Salem, earned special distinction for their bravery. By 1776, however, it had become clear that the revolutionary rhetoric of the founding fathers did not include enslaved blacks. The Declaration of Independence promised liberty for all men but failed to put an end to slavery; and although they had proved themselves in battle, the Continental Congress adopted a policy of excluding black soldiers from the army.In spite of these discouragements, many free and enslaved African Americans in New England were willing to take up arms against the British. As soon states found it increasingly difficult to fill their enlistment quotas, they began to turn to this untapped pool of manpower. Eventually every state above the Potomac River recruited slaves for military service, usually in exchange for their freedom. By the end of the war from 5,000 to 8,000 blacks had served the American cause in some capacity, either on the battlefield, behind the lines in noncombatant roles, or on the seas.By 1777 some states began enacting laws that encouraged white owners to give slaves for the army in return for their enlistment bounty, or allowing masters to use slaves as substitutes when they or their sons were drafted. In the South the idea of arming slaves for military service met with such opposition that only free blacks were normally allowed to enlist in the army.Most black soldiers were scattered throughout the Continental Army in integrated infantry regiments, where they were often assigned to support roles as wagoners, cooks, waiters or artisans. Several all-black units, commanded by white officers, also were formed and saw action against the British. Rhode Island’s Black Battalion was established in 1778 when that state was unable to meet its quota for the Continental Army. The legislature agreed to set free slaves who volunteered for the duration of the war, and compensated their owners for their value.This regiment performed bravely throughout the war and was present at Yorktown where an observer noted it was “the most neatly dressed, the best under arms, and the most precise in its maneuvers.”Although the Southern states were reluctant to recruit enslaved African Americans for the army, they had no objections to using free and enslaved blacks as pilots and able-bodied seaman. In Virginia alone, as many as 150 black men, many of them slaves, served in the state navy.After the war, the legislature granted several of these men their freedom as a reward for faithful service. African Americans also served as gunners, sailors on privateers and in the Continental Navy during the Revolution. While the majority of blacks who contributed to the struggle for independence performed routine jobs, a few, such as James Lafayette, gained renown serving as spies or orderlies for well-known military leaders.Black participation in the Revolution, however, was not limited to supporting the American cause, and either voluntarily or under duress thousands also fought for the British. Enslaved blacks made their own assessment of the conflict and supported the side that offered the best opportunity to escape bondage. Most British officials were reluctant to arm blacks, but as early as 1775, Virginia’s royal governor, Lord Dunmore, established an all-black “Ethiopian Regiment” composed of runaway slaves. By promising them freedom, Dunmore enticed over 800 slaves to escape from “rebel” masters. Whenever they could, enslaved blacks continued to join him until he was defeated and forced to leave Virginia in 1776. Dunmore’s innovative strategy met with disfavor in England, but to many blacks the British army came to represent liberation. Research more about this great American Tragity and share it with your babies. Make it a chqmpion day!