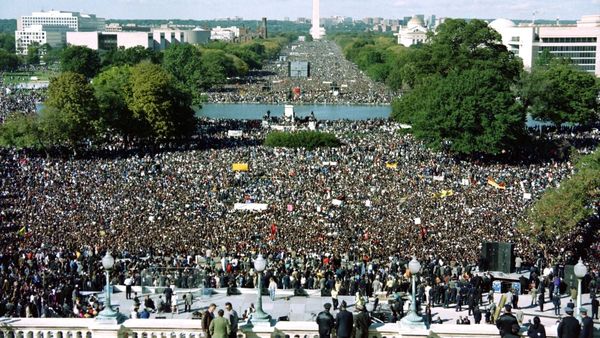 GM – FBF – Today’s American Champion event took place when most American’s were afraid that something tragic was going to happen. I was proud to be a part of it by being there and having the opportunity to speak the night before to a select group of high school students that were our talented tenth for 1995. Snipers were in the trees, roof tops and naturally in the masses but no one was even charged with anything a great afternoon in Washington, D.C. Today in our History – October 16, 1995 – The Million Man March in Washington, D.C.On October 16, 1995, an estimated 850,000 African American men from across the United States gathered together at the National Mall in Washington, D.C. to rally in one of largest demonstrations in Washington history. This march surpassed the 250,000 who gathered in 1963 for the March on Washington where Dr. Martin Luther King Jr. gave his historic “I Have a Dream” speech. This assembly of black men was organized and hosted by the Nation of Islam leader Louis Farrakhan who called for all able-bodied African American men to come to the nation’s capital to address the ills of black communities and call for unity and revitalization of African American communities. Although the Million Man March was proposed and organized primarily by the leader of Islam, many religions, institutions, and community organizations across the spectrum of African America joined together not only for a rally of black men but also to build what many saw as a movement directed toward a future renaissance of the black race.Those unable to attend the march in Washington were asked by Louis Farrakhan to stay home from work and keep their children at home from school in a show of solidarity and support for the objectives of the march. Farrakhan also called on march participants and supporters to refrain from spending money on October 16 to illustrate to the United States the importance of African American dollars to the national economy.Besides the keynote address by Minister Louis Farrakhan, several prominent speakers addressed those gathered at the Washington Mall including civil rights activists Benjamin Chavis, Jesse Jackson, Rosa Parks, and Dick Gregory. Stevie Wonder entertained the gathering with his songs while Maya Angelou used her poetry to offer advice to the men at the rally. The message of most of the speeches called for black men to “bring the spirit of God back into your lives.” These marchers were also encouraged to register to vote to build black political power.March participants took a public pledge to support their families, refrain from violence and physical or verbal abuse toward women and children, and renounce violence against other men “except in self-defense.” They also pledged abstinence from drugs or alcohol and to concentrate their efforts on building black businesses and social and cultural institutions in the communities where they lived. The march participants were then asked to “go back home” to implement the changes they had pledged.Although many of the changes pledged in Washington on October 16 to revitalize African American communities were not prominently in evidence in the years that followed the march, organizers claimed two notable successes. In the year after October 16, over 1.5 million black men registered to vote for the first time. There was also an upsurge in the number of black children adopted by African American families. Research more about this great American Champion event and share it with your babies. Make it a champion day!