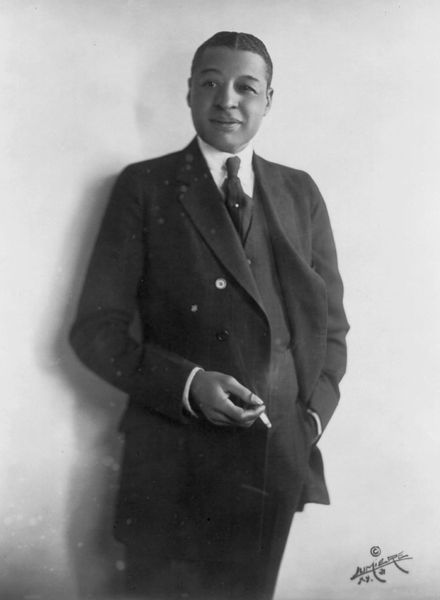 GM – FBF – Today’s American Champion was a Bahamian-born American entertainer, one of the pre-eminent entertainers of the Vaudeville era and one of the most popular comedians for all audiences of his time. He is credited as being the first black man to have the leading role in a film: Darktown Jubilee in 1914.He was by far the best-selling black recording artist before 1920. In 1918, the New York Dramatic Mirror called Williams “one of the great comedians of the world.”Williams was a key figure in the development of African-American entertainment. In an age when racial inequality and stereotyping were commonplace, he became the first black American to take a lead role on the Broadway stage, and did much to push back racial barriers during his three-decade-long career. Fellow vaudevillian W. C. Fields, who appeared in productions with Williams, described him as “the funniest man I ever saw—and the saddest man I ever knew.”Today in our History – November 12, 1874 – Bert Williams (November 12, 1874 – March 4, 1922) was born.Egbert “Bert” Austin Williams was one of the greatest entertainers in America’s history. Born in the Bahamas on November 12, 1874, he came to the United States permanently in 1885.Williams met George Walker in San Francisco in 1893 and the two formed what became the most successful comedy team of their time. After appearing on Broadway in Victor Herbert’s The Gold Bug (1896), Williams and Walker created pioneering vaudeville shows and full musical theater productions, including Senegambian Carnival (1897), The Policy Players (1899), The Sons of Ham (1900), their biggest hit, In Dahomey (1902)–which also played in London the following year, Abyssinia (1906), and Bandana Land (1907).When Walker retired in 1908 due to illness, Williams starred in Mr. Load of Koal (1909)–the last black musical on Broadway for more than ten years. Unable to continue producing shows without Walker, Williams signed on with the Ziegfeld Follies in 1910–the only black performer in this famous review.He explained this controversial move saying, “… colored show business is at a low ebb just now … it was far better to have joined a large white show than to have starred in a colored show, considering conditions.” Williams stayed with the Follies through 1919, after which he appeared with Eddie Cantor in Broadway Brevities (1920) and Under the Bamboo Tree (1921-22). While on tour with the latter show, his failing health caught up with him and he contracted pneumonia. Williams died in New York City on March 4, 1922.Williams was also one of the most prolific black performers on recordings, making around 80 recordings from 1901-22. Indeed, his first recording sessions with George Walker for the Victor Company in 1901 are considered the first recordings by black performers for a major recording company. Williams signed with Columbia in 1906 and the majority of his recordings were with that company, including what became his signature number, “Nobody,” with words written by Alex Rogers. Research more about this great American Champion snd share it with you babies, Make it a champion day!