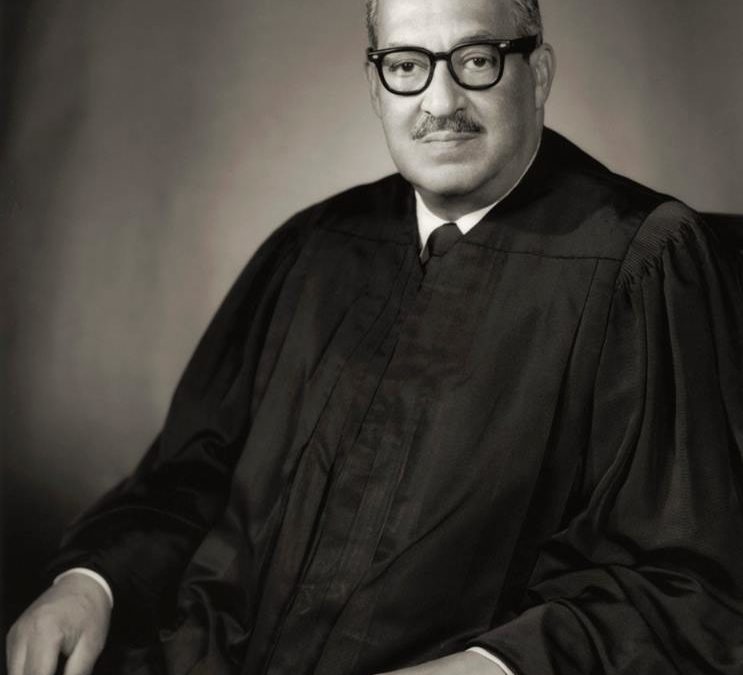 GM – FBF – Today, I want to share with you the story of one of my childhood hero’s Justice Thurgood Marshall, the first black nominated to the United States Supreme Court announces his retirement from the bench.

Remember – “I deny each and every single allegation against me today that suggested in any way that I had conversations of a sexual nature or about pornographic material with Anita Hill, that I ever attempted to date her, that I ever had any personal sexual interest in her, or that I in any way ever harassed her.” “This is a case in which this sleaze, this dirt, was searched for by staffers of members of this committee. It was then leaked to the media. And this committee and this body validated it and displayed it in prime time over our entire nation. This hearing is a type of “high tech lynching” – Clarence Thomas

On July 1, 1991, President George H. W. Bush nominated Clarence Thomas for the Supreme Court of the United States to replace Thurgood Marshall, who had announced his retirement. The nomination proceedings were contentious from the start, especially over the issue of abortion, and many women’s groups and civil rights groups opposed Thomas on the basis of his conservative political views, as they had also opposed Bush’s Supreme Court nominee from the previous year, David Souter.

Toward the end of the confirmation hearings, behavior allegations by Anita Hill, a law professor who had previously worked under Thomas at the United States Department of Education and then at the Equal Employment Opportunity Commission (EEOC), were leaked to the media from a confidential FBI report. The allegations led to a media frenzy about sexual harassment, and further investigations. Televised hearings were re-opened and held by the Senate Judiciary Committee before the nomination was moved to the full Senate for a vote. Thomas was confirmed by a narrow majority of 52 to 48.

Public interest in, and debate over, Hill’s testimony is said by some to have launched modern-day public awareness of the issue of sexual harassment in the United States. Some also link this to what is known as the Year of the Woman (1992), when a significant number of liberal women were simultaneously elected to Congress. Some also called these women the “Anita Hill Class”.

The case influenced the coverage of the allegations of sexual harassment against Bill Clinton in the 1990s. Research more about the Thomas – Hill Hearings or watch one of the three movies about this part of history and share with your babies. Make It A Champion Day!